The Fountain at the Ass-End of Wall Street

A regular listener wrote in and asked us to post a photograph of the fountain at the ass end of Wall St.

The fountain is the final part of the park that the city set up down there, and I think that the entire project was done in order to make for less parking on Wall St. in these days of panic and over reaction.

The city began working on making this tiny park years ago, and it really disrupted the area around WBAI. Everything got dug up and torn out. We talked about it on the air when it was still in this condition. And the people constructing it took something like a year and a half longer to get it partially done, without the fountain, than had originally been announced. Yeah, just getting to the front of 120 Wall St. was sometimes difficult in those years.

During one program, when it looked as if the park had finally been completely finished, we did a live remote from it, which consisted of me using Pickles' cell phone to call in from downstairs. Yes, a live remote that was only an elevator ride away. 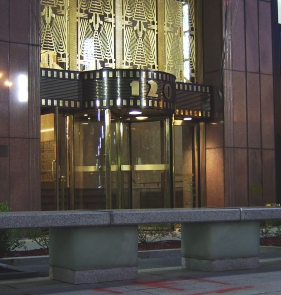 Some may ask why the ass end of Wall St. is so wide while the beginning of this historic street is so narrow. Well, I've recently seen some maps of New York City from 1832, and they show that there was a “slip” in the space in front of the block where 120 Wall St. is. They used to dock ships there! Before that, back when New York City was New Amsterdam, Wall St. ended around the modern day Front St., more than a full block west of today's shore.

So there used to be a great deal of metered parking out in front of 120 Wall St, in the space where the 19th Century slip had been. After 9/11 I think that some became concerned that this would be a convenient place for car bombs to be left. So they set about making this park, and thus narrowing Wall St. at its eastern end.

The park was of an odd looking design, with granite benches on top of glass cubes. The cubes were lit up at night for the first year or so of the park. They had multi colored lights in them and they would change colors over the course of a minute or so. I think that they were supposed to change colors in sync with each other, and some did. Some got stuck on one color of light and some just changed their colors independently of all the other cubes. It was quite a sight when they got that part of the park finished and Pickles and I were hurrying down Wall St. after midnight and saw two city blocks of these lights lined up, along the “allée” as the designer seems to call it, doing their light dance. That's when we dubbed this bench lined straightaway “the UFO landing strip.”

Some have compared the fountain to a structure seen as a backdrop in an episode of the original Star Trek TV series, and some wonder if maybe a UFO did finally land there and we only think it's a fountain!

The park is named Manhatta Park. I don't know why it's named that.

Originally they had some nice, comfortable benches lining the allée and then they ripped those out to install the granite benches with the blinking glass cubes underneath them. Some of the good sitting benches are still around in the more curved paths in this park.

These granite benches have attracted the attention of some skate boarders who have broken the glass cubes in order to completely dismount the granite slabs which form the benches and make ramps out of them. I've seen some of these skate boarders and they're not kids, they are really a bit old to be vandalizing public property like this. 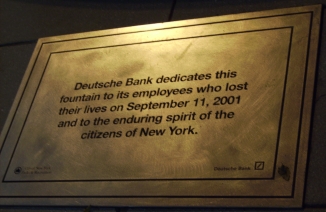 They also skate along the tops of the benches even when they haven't made ramps out of them, so some group, maybe the local building Management, locked chains across the tops of the benches to make them less useful to the skate boarders, later on a set of metal ridges was permanently placed across the tops of all of the granite benches. And there's now a sign up that expresses a sentiment that seems to be shared by most people who've had to deal with the cases of arrested development who think that playing with skateboards overrides the rights of everyone else.

Right about the time that the fountain was finally installed they shut off the light show underneath the benches. As can be seen from the photograph, the light theme was continued in the base of the fountain, although we've only ever seen it with blue lighting.

Pickles and I have considered the entire design of the UFO Landing Strip to be farcical from the very beginning. But while we make fun of it all, including the design of the fountain, there is a serious side to it. As it turns out the fountain is dedicated to the employees of the Deutsche Bank who lost their lives to the attacks of 9/11.

To my home page.