The Evil Morelab used to be my girlfriend, now she's my buddy.

We had both been exclusively homosexual before we got together. She'd had four or five young girlfriends, I'd had a male lover for 12½ years prior to this (I'd had anonymous sex with hundreds of men earlier in my life, but that all ended by the end of 1972). I was 15 years older than she. She was a lot brighter than I. The Evil Morelab, it turns out, is a stone genius.

We met at WBAI and became each other's first lovers of a different gender. We had known each other for a couple of years, but by early 1986, we had gotten closer to the point of physicality. And then, in May, we did it. We had a hard time figuring out how, exactly, to accomplish the deed of sex with someone built as differently as men and women tend to be. I was amazed that there could be a population explosion if this was the way that babies were made. But we did it, pretty much, and thus went from being friends to being lovers for the next 3¼ years.

Eventually we figured out coitus and were able to do it quite well, or at least to the satisfaction of each of us. We even had a pregnancy scare once. I told The Evil Morelab that whatever she decided to do about this we were in it together all the way to the end, even if that meant we had to raise a kid! If it was a girl we were going to name her Ichabod. We never figured out if The Evil Morelab would bring this to term or not because it turned out to be a false alarm. Quite a new experience for both of us, having such consequences to mere sex. We wondered if it would be cruel and unusual punishment for some child to have the two of us as parents. For the kid, us and the planet earth it's best that this was only a scare and not a pregnancy.

We had quite a number of adventures together, and figured out our own relationship, since we each had no experience with male/female relationships prior to this one. We made it up as we went along, being somewhat unconventional along the way. We never did figure out why people would frequently stare at us as we walked around, especially along Ocean Parkway in Brooklyn. Were they able to figure out that we were not heterosexuals, even though we were a differently gendered couple? Possibly. We wondered if there was some standard way that straight people held hands together. Maybe I was holding her hand in a way that wasn't the way men were “supposed” to hold a woman's hand. Which of course meant that she'd be holding my hand in a manner differently from the way women were “supposed” to hold a man's hand. Well, we didn't give a rat's ass about that, so we held hands the way we felt comfortable doing it and just went on with our lives.

We spent a lot of our “dates” hanging out on Ocean Parkway in Brooklyn. This is at one and the same time a tree lined boulevard and a six lane highway occupying the ancient “Forest Trail #1” from the days when the Canarsee and Flatbush Indian tribes ruled the area. We would walk there together at all times of the year. We would watch storms come towards us across the Washington Cemetery there; we would sit on the benches and look at waxing gibbous moons, orange with horizon, rising into steamy, Summer nights. I recall several times walking back and forth between Ave. J and Ave. L talking about various concepts of radio, personal relations and states of consciousness when there was snow on the ground, sometimes quite a considerable amount of snow. We would crunch over thick accumulations of ice sometimes, and turn under the weak lamps at the ends of the block to march again, walking back and forth for miles some nights engrossed only in each other's minds, with no other pedestrians or bicycle riders to share that strip of Ocean Parkway with us.

We went on a few “Magical Mystery Tours” when we'd just go off in some direction or another. We landed in New Hope, Pennsylvania a couple of times. One time we went to a sort of corner on a rural road, and I was very surprised to see a car rushing by us in the night, as we stood on the shoulder of the road, with license plates that read simply “WBAI.” They were Pennsylvania plates, and I never found out whose they were or why someone would have the call letters of a New York City radio station as their vanity plate. But the most interesting thing was the sky some of those nights. Sometimes it was clear, and the sky was country-spectacular. We watched shooting stars and I pointed out constellations, asterisms, the Milky Way and nebulae, some of which were not at all visible from the city. We even ogled M-31, the Great Galaxy in Andromeda from New Hope a few times.

In August 1989, The Evil Morelab decided that she was uncomfortable not being a total lesbian. And so our love affair ended. We're buddies now. I call her about once a week and I love her still. I'll love her until I die, I suppose.

Here is a collage that The Evil Morelab made for me for our third anniversary. It's dated “5/10/89.” Unfortunately, over the seven years between her giving it to me and my scanning it in some of the glue that she used to put it together came through the paper. So we have some brown spots in one section of the collage. I spent a lot of time removing some of the brown spots, but I got tired of hanging fire on getting this on line and I wanted to put it up sooner rather than never, so there's still considerable glue stain showing through. Sorry about that. 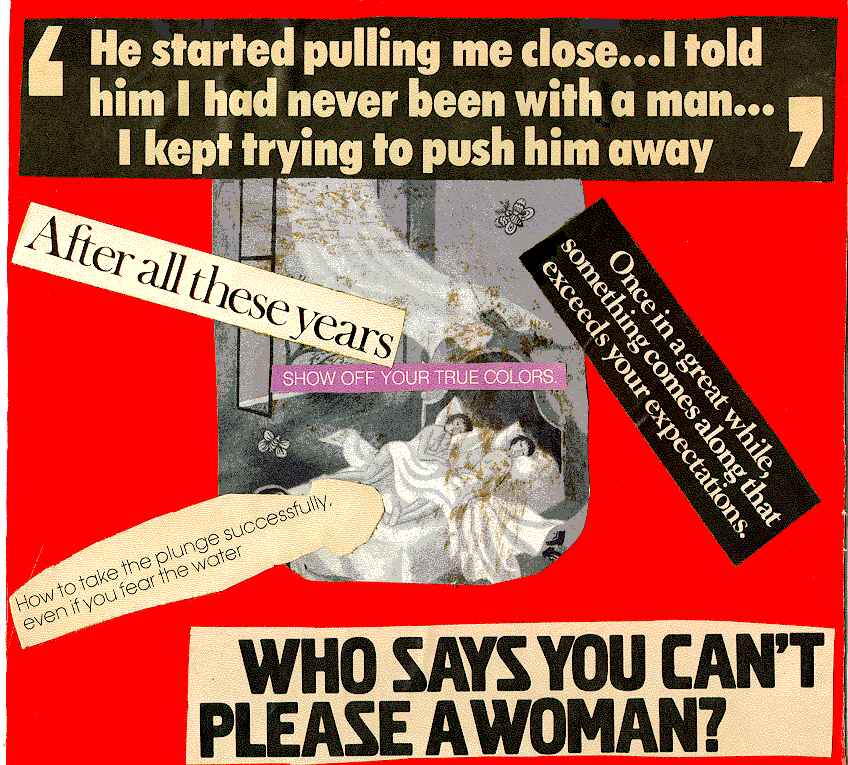 After we were no longer lovers, The Evil Morelab encouraged me to find another girlfriend. She's had a few herself since 1989. She made suggestions for how I might meet someone, and mostly encouraged me to be a lot more aggressive than I usually am. She's glad that I am now in a relationship with Pickles of the North. The Evil Morelab is a good kid, and I wish her the best.

Back to the miscellaneous page.

Except where noted, the contents of this Web page and subsequent Web pages on this site are copyright © 1996, 1999, R. Paul Martin