Web links related to the Back of the Book program of February 17, 2003


It's Tuesday morning 2/25/2003 05:38:26 and this page is done. We pitched on this program and that always results in chaos. I did get to the below stuff, however. Some other things I'd prepared will have to wait for another program. We only read one snail mail, from a listener who sent in a pledge, so there are no E-mails to be posted on this program's page. Pickles of the North and I were lucky to get to WBAI on time. We slogged through the blizzard all right but our train was slow and delayed! The adventures walking home I'll talk about on the next program.

Here is the latest on the saga of Pacifica. The big meeting of the interim Pacifica National Board has been changed again to March 7-9, in Los Angeles, CA, to discuss the bylaws.

Here's the WBAI schedule. Don't blame me if it's not accurate, I didn't make it up I'm only relaying it. Here's a schedule made by a listener who has Web links for various programs and producers.

Our colleagues from Off the Hook now have both a RealAudio streaming web cast operating, and a new MP3 stream both of which were working at about 10:28 PM last night. The MP3 feed is now the preferred feed.

We pitched on this program as part of WBAI's Winter marathon. In the end we raised exactly $1,000. A big thanks to all who pledged, and to those who worked the tally room as well.

Hey, you knew that we were going to talk about duct tape tonight, right? Well, WBAI is held together by duct tape. I feel so safe. Thanks to Pickles of the North for the link.

On a previous program I reported about physicists Sergei Kopeikin and Ed Fomalont doing an experiment that they say measured the speed of gravity. Well, some other scientists are now disputing that. Physicist Clifford Will says that Kopeikin and Fomalont discovered something, but it was not what they thought it was. We'll keep following this story as it progresses, as I'm sure it will.

Pickles of the North and I went to Atlantic City for a couple of days in the week before this program. We ended up lodging at one of the older hotels on the Boardwalk (The Dennis Hotel, built in the 1880s) because it was a lot cheaper than anyplace else we could have stayed.

Our ride down was uneventful this time, I'm glad to say, except for the beginning.

A day or so before we left on our trip the nation was put on a heightened “Orange Alert” status owing to what turned out to be a bogus tip from some al Quaida creep. So as Pickles of the North and I stood in line for our bus at the Port Authority in Manhattan we were glad to have gotten there in plenty of time and to have only a couple of people ahead of us in the line. And then two Port Authority workers wheeled portable ticket counters up to the boarding line. It was an unannounced security check. They had metal detector wands and were looking through people's luggage. 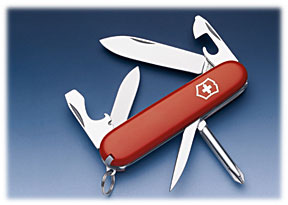 I've carried a Swiss Army Knife with me for 20 years now. The old “Tinker” model is exactly what I'd wanted for a long time. When I go places where I know there's going to be a check like this I leave it home. But this security check was a surprise, we'd never had one for going onto a bus before.

I anticipated a possible problem with the Swiss Army Knife being in my pocket and so I decided to drop it into my briefcase where I had a lot of other stuff. If they didn't find it we didn't have a problem.

So I go up and Pickles puts the stuff from her pockets into a tray and gets wanded. She's okay. I'm carrying the two bags we have with us because if there is a big problem with my Swiss Army Knife being in one of the bags it should be my problem, not hers. The guy asks me to put the bags up on the little ticket counter thing, and I do. He then decides to search my briefcase! But he looks at the inside very cursorily and never sees the Swiss Army Knife. I figured I was home free on this one.

Then it's my turn to get gone over with the metal detecting wand. So I step to the side of the rolling ticket counter where the guy's going over people with the wand and start to empty my pockets. My keys go right into the tray, and I reach down to get my coins out when I suddenly feel something I'd not realized was there.

I've got this other little knife that I carry sometimes. It's small and legal to carry, but it can be a bit scary looking to some people who are not familiar with these things. And I discover it's in my pocket! And I'm standing in front of the guy who's looking for things that could somehow be construed as weapons. I mean, the airlines won't let people on with nail clippers and tweezers, for chrissakes!

I start fumbling about with the coins and actually moved the knife from one pocket to another and palmed it a little. I could have passed it to Pickles, but that might involve her in something unpleasant. I wondered if I could somehow palm it or keep it up my sleeve during the search. But there were people all around, and there was no telling if someone might have been a cop or just a person who would have alerted the security guy that I was concealing something from him. In the end I figured that I'd better not risk getting caught trying to conceal the damned thing so I took it out of my pocket, held in in my hand and asked, “Is this a problem?”

“Yeah, that's a problem!” the security guy said. He told me I couldn't go on the bus with it. He wanded me very perfunctorily and said that the knife couldn't go on the bus, that I'd either have to leave it there or go upstairs and mail it to myself. The latter option would have probably made me miss the bus.

I was putting stuff back in my pockets and wondering what to do when the bus driver came up and asked the guy if I was on his bus. The security guy said yes and the bus driver volunteered to carry the knife for me on the ride down and return it to me in Atlantic City! I agreed to this right away and that's what we did. So I was able to keep my knife and not miss the bus. Very nice of the bus driver.

On the way back I packed both knives in bags which I carried. But there was no search of any kind on the bus coming into New York City. So I got away with that one. 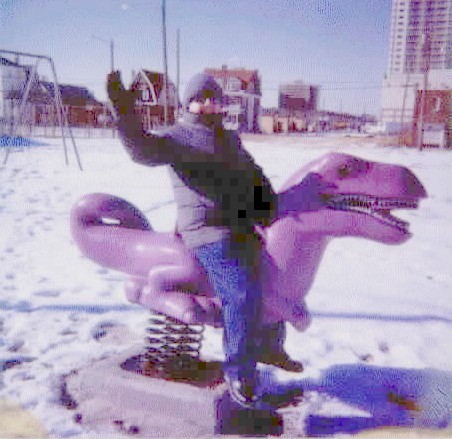 Atlantic City was cold. We still walked around a bit. We've never been able to walk the entire length of the Atlantic City Boardwalk. We tend to go there in the off season and the wind chill has kept our walks a bit limited. This time we walked significantly farther along the Boardwalk, maybe because we went down there really ready for Winter's cold. We got almost to the end of the Boardwalk this time before the bleakness, cold and fatigue made us stop.

On the way back we left the Boardwalk at a street named Pacific Ave. There we found a forlorn looking playground that was covered in snow and looked like no little kids had been around it for a while. So I hopped onto a plastic Tyrannosaurus Rex for this photograph that Pickles took. Hey, the last time I was on a ride in Atlantic City was in 1956.

As we continued walking back along Pacific Ave. I managed to have a bout of hypoglycemia. This was probably the result of the medication I'm taking for diabetes these days. In any case, Pickles of the North had a little bag with some stuff in it expressly for the purpose of dealing with any hypoglycemic problems I might have had on the walk. So on a frozen and windy street corner I had some of those little crackers with peanut butter on them that they sell in hotel vending machines and some quite cold water. It made a difference.

After this we bought some food to eat in the hotel room at a run down looking grocery store. While we were there only people who looked like they were in the final years of a serious drug problem came in. Some were the clientele of the Riviera Hotel right next door, where there was a “no visitors” sign on the door. Atlantic City can be a sad place.

In the end we had an overall good time with our old fashioned hotel room and I spent more on food than I did on the nickel slot machines.