Web links related to the Back of the Book program of February 28, 2005


It's Sunday evening 3/13/2005 18:42:44 and this page is done. There's some sadness going on with me these days over various losses. We got to the below topics and some mail on this program.

The WBAI Local Station Board (LSB) will meet next on Wednesday March 9, 2005, venue to be determined. Public comment will be welcome during the meeting.

Did you know that I've got a brief synopsis of almost every WBAI LSB meeting so far? Well, I do. And I'll be updating it soon.

Our colleagues from Off the Hook now have both a RealAudio streaming web cast operating, and a new MP3 stream. The MP3 feed is now the preferred feed. Both were operating at 8:59 PM last night.

A number of people have died this past fortnight, including WBAI producer Joel Greenberg and my Uncle Larry. We spoke about all of this on the air a bit.

Humanity may be 195,000 years old. That's quite a bit further back than fossil evidence has placed it before, but it fits right in with DNA evidence.

Speaking of ancient life, relatively high concentrations of methane gas have been found above what some scientists think may be a set of fossil ice floes frozen in place on a shallow sea on Mars. Fresh methane could be an indicator of microbial life. Or it could be the result of geochemical processes inside the planet.

And speaking of outer space, there was one mighty big boom that went off last December. This blast overloaded some scientific instruments on board Earth orbiting satellites — from 50,000 light years away! The event liberated more energy in two tenths of a second (0.2 seconds) than the Sun gives off in a period of more than 100,000 years. You can find out more about magnetars here. 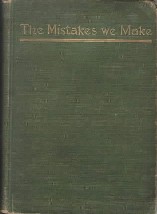 Unfortunately, I've discovered that I've lost that 1898, book named The Mistakes we Make edited by Nathan Haskell Dole. I've been reading bits from it for a while now and have several pages of notes relating to it, but I've lost the book, so I don't think we'll be doing any segments on it from now on.

I appear to have left the book at WBAI after one of the programs in January. Unfortunately, no one has turned it in and no one has said they've even seen it around. I'll keep my notes in case it, or another copy, turns up in the future.

The really odd thing is that this loss, discovered as a surprise, has exacerbated feelings about the loss of my uncle. Funny how the human mind works. You're braced for one thing, and when it happens you can handle it well, but then something unexpected happens and triggers another feeling of loss and this completely subverts the resolve you had regarding something far more serious.

And we did get to some of your mail on this program. We start with a distinction for Virginia that not everyone is pleased with.

But, I disagree with Equality Virginia's analysis. I work in those Southwest and Southside counties. Our biggest problems are traffic congestion and gay/lesbian marriage running a very close second.
Susan From VA

Things apparently worked out a bit better than the above, I gather from this more recent press release.

I just tuned into WBAI--and they're STILL pitching!!

Is the marathon continuing though the weekend?---and, if so, do you need anyone on the phones??

Luckily, the extended 'thon didn't extend to the overnight programs. Seth helped out on the phones at the last 'thon, as he very frequently does for us.

The extended 'thons, this one went on for 27 days and just missed making its goal, are an area of contention at WBAI these days. Some feel that it's just fine to be pitching for one quarter of the time, as we did in Fiscal Year 2004, but some think that much pitching is detrimental to the radio station. I'm of the latter opinion.