Web links related to the Back of the Book program of April 16, 2001

It's Friday night 4/27/2001 20:06:27 and I think I'd better declare this page provisionally done. I may or may not get the photograph of Philip's Candy Store in Coney Island up here, but the next program is looming and I'd better close this one's web page. The page is the usual mix of tenses from stuff I put up before the program and stuff that I wrote here after the program. We'll all have to live with that. Hopping Oyster and a belated Merry Underpass to all who care about that stuff. I'll be talking about this particular holiday season and my remembrances of it from childhood. I'll get away from superstition and talk about the latest confirmation of the strange force that's been discovered accelerating the expansion of the universe. I've out up some mail, too. We'll soon be caught up at this pace. So this page is sort of done, oh what a mess things are.

The usual WBAI Web cast has been down for almost three months now, it's history. However, our colleagues from Off the Hook probably have an alternate web cast going. At 7:27 PM last night it was working, so good luck.

Pickles of the North and I went to Coney Island on Friday to see off Philip's Candy Store. I have been hanging fire on getting photographs up here all this time. I still haven't gotten the photographs developed yet and there's still the possibility that the camera didn't work anyway. The last four shots I had developed from that camera, from a previous roll of film, were blank.

I've even looked through old photographs from when I was a kid. But we were always coming out of the subway and seem never to have turned around and taken a photograph of where we'd been!

If I can get any photographs of Philip's Candy Store up here I'll do it. 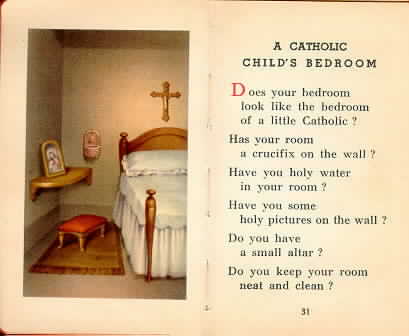 I'm going to be talking about organized superstition. I was raised in one of the major superstitions: Roman Catholicism. I'll be reminiscing and reading from the little book titled My Little Heart Prays by Sister Mary Theola, School Sister of Notre Dame, © 1954, Notre Dame Publishing Company. Apparently, Sister Mary's real name was Henrietta Price

This little book was given to each of us in preparation for what's called in Catholicism our “First Holy Communion,” a cannibalistic ritual where you eat one, or more, of the gods.

This small, simply formatted book is full of absurd propaganda, which is understandable since it was produced by some sexless nun according to her perceptions of kids in the First or Second Grade whom she was to indoctrinate into the superstition to which she'd devoted her life.

In the part of the book reproduced here you can see Sister Theola telling kids how their bedrooms had better be arranged, unless they wanted to piss off god! I didn't have most of that stuff in my bedroom. The bedroom depicted in this picture always looked really weird to me. And if you really had to keep your room neat and clean I was surely doomed to Hell!

This entire book is chock full of very judgmental crap and it directs kids to be such goody two shoes that they'd be killed by their peers if they acted according to its teachings.

I made my First Holy Communion on May 22, 1954. It was a trip in and of itself. I was in the First Grade, rather than the usual Second grade. So I was 6 years old rather than 7 when I went through this absurd ritual. Imagine, telling six year old kids that they are liable to go to Hell for eternity for something they might have done, some sin they might have committed. What the hell could a six year old do to merit eternal punishment? Sick stuff to feed little kids. But then organized superstition is largely about scaring small children.

I'll be speaking a little bit about a new development in the ongoing revolution in cosmology. A star that exploded about 11 billion years ago has provided a candle by which that odd force of the universe which is variously being called “quintessence,” “negative gravity” or “dark energy” could be gauged a bit. Earlier in the history of the universe, which is maybe 14 or 15 billion years old, gravity was dominant, whereas in the last few billion years, as everything has expanded, this new force has begun to dominate. One scientist says that the discovery of the light from this exploding star, SN 1997ff, “nails the existence of the dark energy.”

So I didn't get through too much mail because I went on rather a bit about my Easter memories and organized superstition. But here's what I did get through.

Our first E-mail is about my monologue about the WBAI situation as it was in mid January. The gag rule hadn't been reimposed by then and I was able to go on about how I felt and about the facts at will. Of course the gag rule is back and you can only read about my opinion in full on this Web site now.

Two listeners were glad to hear someone from neither of the factions in the WBAI civil war talk about the reality of the situation.

Thank you for your report last night(or should I say this morning).

You are very lucid in your reporting, and very professional. I would like you to know how grateful I am that you remain strong, with your eye on the ball, which you clearly are doing, even under attack.I respect you for your principled stand and want you to know that you are very important to us listeners. Also, having lived through 2 corporate mergers, I do not envy you the working environment of suspicion and antagonism that must be acute at the station now.(I note that you do not whine, but persist, and you can only be admired in these circumstances).

Thank you. Keep hanging in and helping us stay on target.
Barbara
A listener

...and thank you for the concise update on "the station situation" on your most recent show. The acrimonious crap that passes for the Morning Show these days is just shocking.