Web links related to the Back of the Book program of April 28, 2003

Here is the latest on the saga of Pacifica. The big meeting of the interim Pacifica National Board was held March 7-9, in Los Angeles, CA, to discuss and possibly even pass the new bylaws for the Pacifica Foundation. Well, it was a big flop, the various schemers sank the bylaws again. I'll be updating this link soon.

WBAI now has a program schedule up on its Web site. It's not completed yet, they still haven't gotten the individual program pages together to provide links and such, but it's a start and it's official. Here's a schedule made by a listener who has Web links for various programs and producers.

Our colleagues from Off the Hook now have both a RealAudio streaming web cast operating, and a new MP3 stream both of which were working at about 11:08 PM last night. The MP3 feed is now the preferred feed.

Hey, you might want to look at my previous program's Web page, at least it's done.

On the program I related my sad story of how I updated Windows on my computer because of a security alert and then found the system spontaneously re-booting a lot.

I'd wondered if it could have been the result of malicious ad software, often called “spyware,” that had gotten onto my machine. I ran Ad Aware, which is designed to identify and remove such malicious software, and later on I also got SpyBot because a listener recommended it. I present both of these and recommend that folks look into using them.

So I ran these things and cleared the little amount of stuff off my system. Just about all of it was in the Microsoft Internet Explorer sub-directory. I never use that browser, so this spyware crap must have come in during the very few times I did use it.

In any case the bad news is that after the program and after some days of behaving all right my computer started to spontaneously re-boot again! It may well be some damned thing that the Microsoft Windows update did, or it could be that my computer is having a physical problem coincidentally with the update. I'm still trying to find out what's going on.

I think I'm still within a few days of my warranty on my computer expiring, so I'm trying to get ahold of the folks who sold it to me to see if I can get them involved. If it's a physical problem, like a dying power supply, only they can fix it economically for me.

It made no difference that the thieves at the Metropolitan Transportation Authority were caught cooking the books by both the New York State and New York City Comptrollers, they went ahead and raised the bus and subway fare by one third!

But as a consolation prize they're going to allow people to get change of a $20 bill from now on. How nice of them.

I spoke on the air about this filthy sky pilot Josh Llano who is a Chaplain in the US army in Iraq and about how he was coercing troops to participate in his superstition in exchange for baths. What a great guy, holding out water in a desert. Some folks have already complained about this, but the army, as usual, says nothing happened. Note that no one is challenging the fact that he had a 500 gallon pool of water in the desert, that he was doing baptisms and that he had converted some soldiers to his Southern Baptism superstition. Of course the army has an interest in seeming to have enough water for everyone and to not have predatory missionaries in its Chaplain Service.

Speaking of superstitious nonsense and Southern Baptists, they've lost one in Arkansas. A Federal Court has ordered the Harry Potter books returned to the library shelves in the Cedarville School District of rural Arkansas. The books had been removed to the back office of the library after some parents objected to them because the books have magic, spells and wizardry as their central topics.

The school board had required that kids get parental permission in order to look at or check out the books. Of course these are kids' books but that doesn't stop some rural Arkansans who are insecure about their superstition.

The school board is not going to appeal the court's decision.

A New York Times article asks if this modern American empire is sustainable.

Ironically, the last empire that was also a big debtor was Czarist Russia! Of course this debt situation helped the Russian Empire collapse during World War I.

There is also the question of whether big foreign investors might decide to try to influence American foreign policy by exercising the power of the purse strings they hold. Some Saudi Arabian and French millionaires have tried to do this, but the debt was too big for them to be able to exert actual influence.

We got through some of the mail backlog on this program. We read a number of snail mails from folks, and we also got to a few E-mails, which we present here.

Hello R. Paul... Guess what? I am able to hear the web stream.. Saturday I changed my service provider and now I can listen to WBAI without any problem. In fact I am listening right now. That night my group of friends and I who listen to your program happened to be together for a dinner party.. So we snapped a picture to give you a view of the weirdos across the sea who listen religiously to your program.
-Neal
P.S. I'm the goofy looking tall guy on the upper right hand side.. Had just flown home from a work trip from Paris so I was actually dressed like a human being. 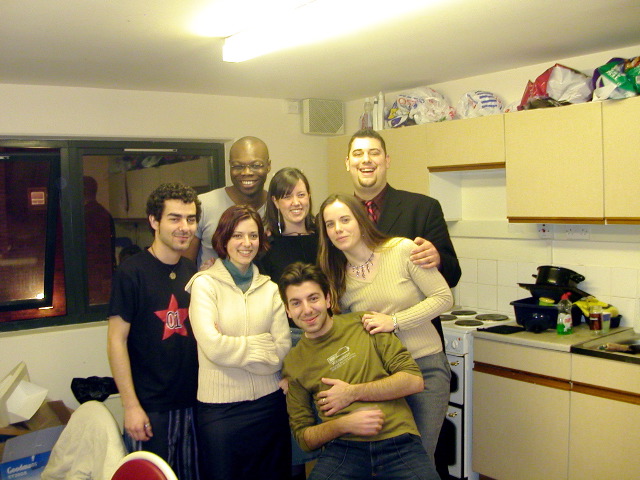 I'm glad that Neal was able to resolve the problem he had with his ISP that wouldn't let him get WBAI's Web stream. Good grief, all those people are listening?!

R. Paul, you probably enjoy smoking, but i found st. Johns Wort allowed me to get my neurotransmitters unsupressed as i kicked tobacco!

Philanderers are held up by the media as trendy, while confounding where abuse of adult power over children is overlooked.

I can only recieve text messages cell to cell.

You're so right! To embark on a supposed quest of understanding with the flawed premis of modern man being many races makes extra mental trash

Well, I don't smoke. Hell, I'd be in real trouble if I smoked! Yes, we are but one species.

This next one is a rarity. We didn't have the time to read it all and respond to it all on the air, so we're presenting here the part we read. We'll read the rest on the next program.

My name is Simon and I am an occasional listener of your program, formerly of NYC but now of Switzerland. I am moved to comment on your show of March 17, perhaps not because your opinion is so unique, but because I hear you as a person and not a voice spouting an ideology of any particular sort. Additionally when I met people with this mindset in America, when I lived there, I couldn't have a discussion with them because they perhaps could not bring themselves to look at things from my perspective. I am not sure I could look at things from their perspective either, but I think I did better at it since I grew up in the States since the age of 12. Yet now, hearing you , a really individual free thinking person express an almost pro war opinion I am moved to write.

First, a slight historical correction. You brought up Belgium as a pacifistic nation which was invaded over and over because it couldn't defend itself. Weeeelll....Belgium is a former colonial power which under king Leopold killed about a million Congolese Africans in order to extract their natural resources. Of course this occured in the 19th century so for most people it's ancient history. Nevertheless it is part of the past of Belgium. As of recently they have resisted the general push for war of Bush. Perhaps they have learned something over the years.

But enough about that.

Well, I wasn't exactly pro-war, I think. As I said then, my position on the then impending Iraq War would probably get everybody angry at me.

It was Mark Twain who really blew the lid off the situation in the Belgian Congo about 100 years ago. But the World Powers that made Belgium had intended that it not be involved in wars they cared about. And then Belgium kept getting invaded by the Germans as an avenue to France in the 20th Century.