It's Tuesday evening 5/23/2006 19:31:21 and this Web page is finished! I've added the graphic of the Uncle Sidney Timmy Tom T-shirt below, and I've posted an archive of this program, since the official WBAI archive is not there. We pitched without notice! We got to the below topics and a little bit more, and we only raised $753 since we couldn't alert listeners beforehand that we were going to be pitching.

The next WBAI Local Station Board meeting is scheduled for Monday, May 22, at 6:30 PM, at 9:00 PM the Board will go into executive session to discuss personnel matters. WBAI Local Station Board meeting will be held at 1199's Bread and Roses Art Gallery, 310 W. 43rd St.(between 8th and 9th Avenue) in Manhattan. Take the 1, 2, 3, 7, or N, R, Q, to Times Square, or A,C,E, to 42nd St. Port Authority, or 4, 5, 6, to 42nd St. Grand Central Station and transfer to the shuttle to Times Square in Manhattan. The location is wheelchair - accessible and public comment is welcome.

Did you know that I've got a brief synopsis of some of the WBAI LSB meetings? Well, I do. And I update them from time to time.

The April 25th, LSB meeting was held in Manhattan. The faction went on a hate binge against the interim General Manager. She layed off the faction leader, not to be confused with the faction boss, and the faction leader is using all of his connections to try to get that paying job back. The entire faction is demanding that he be re-employed. When it's convenient the faction operatives claim that they're so pro-labor, but here we have a situation where numbers of Paid Staff have been layed off or have had their hours cut due to budgetary constraints, and they all have seniority over the faction leader. But since he's the faction leader they want to ignore seniority and keep the patronage system going for him. I can't say just what happened at the executive session at the last meeting, but I can say that it started over an hour late, lasted only twenty minutes and in my opinion was a waste of time. This isn't over.

I have written a statement about the constructive removal of a LSB member and sent it to the PNB, the WBAI LSB and various public mailing lists and bulletin boards. His 6 month “suspension” is now in its 15th month.

There is a new, official stream for WBAI! You can go here and pick which type of stream you want! If this stream isn't working let me know. It was working at 10:44 PM last night.

WBAI is now archiving the programs! Just go here and you'll be able to listen to the program any time for the next couple of weeks. Unfortunately, Back of the Book is not one of the programs that you can download, you can only listen to it on line. But maybe someone will change that at some point. NOTE: The archives have not always been behaving properly of late. They have been fixed, but we can't guarantee their condition. If Back of the Book isn't archived this time I'll post an archive myself. Also note that they have been calling the Back of the Book archive the Carrier Wave archive. You should go by the date of the program until this gets rectified.

NOTE:The archives are screwed up again so I've posted an archive on another Web site. Just go to this link to download the audio archive of the May 22, 2006, radio program. I've stripped out the music, and I've also cut a lot of the pitching out.

Our Saddle Pal Uncle Sidney Smith has a blog! Click here to go to Sidney's blog. 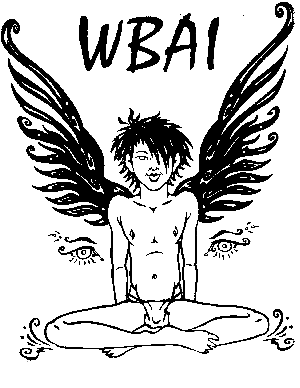 We pitched on this program! We had it in writing that the overnight programs were not pitching tonight, but on Friday we were told that we were! So we pitched and raised $753, which is a lot less than we usually do, but then we couldn't let our listeners know ahead of time that we were going to be pitching which is an important part of how we raise money on Back of the Book.

On the right you can see the major part of a graphic from Sidney Smith's Timmy Tom T-shirt. We pitched the T-shirts as a premium and a good number of listeners pledged for them.

Sidney Smith, of course, does the radio program Carrier Wave, which alternates with Back of the Book. Sidney is a pal of ours and listeners to his program have been following the adventures of his fictional character Timmy tom, who is a half angel. Sidney reads the stories on his program.

This is the first-ever premium for one of our programs and Sidney is an artist whose work is quite respected in Europe. Some of the art books Sidney used to sell for $1, or even give away, back in the '70s, are now selling for $250 or more.

So thanks to everyone who pledged to Back of the Book during this 'thon!

Well, we don't know how much we'll get to tonight, but we are going to talk about a starquake that has told scientists about the crust of a neutron star.