This is an unusual Web page for Back of the Book. As outlined below I've had massive computer problems for more than a fortnight and I wasn't able to post a Web page for this program when it was happening. I'm putting this one up now in sort of “catch up” mode. We covered the below topics on the program. The E-mail from this program will be posted on the Web page for the July 7, 2003, program, unless another disaster happens! 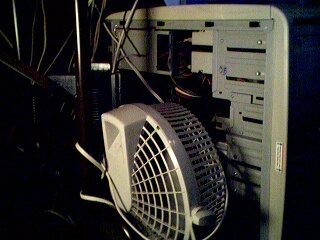 My computer's video card died a sizzling death in the wee hours of Sunday morning, June 23, 2003. It's just luck that I'd printed out a number of things that I'd planned on doing on this program. I'd printed it all out because of a thunderstorm on Saturday, just as Summer was coming in.

So I had one hell of a time trying to get this Back of the Book program together. This picture shows what the disaster after the one above forced me to do to keep things going at all.

One of the interesting things about losing the video card, of course, is that you can't use the computer to search for a new video card! Luckily, Pickles of the North's computer was working and I was able to use that, although it's not what I'm used to.

I'll be going on about all of this some more on the next program.

And so the dreariest Spring came to an end and the dreariest Middle Third I can remember continued. One local news poll found that 70% of the residents of the tri-state area were depressed from this gloomy, rainy weather.

Pickles of the North reported on the 21stannual Mermaid Parade. In keeping with the rainy weather we'd had all Spring it poured on this parade! Pickles of the North called me from Surf Ave. to wish me a merry Solstice during the parade. And that's when it really started to come down! I was shutting down my computer system to avoid problems from possible nearby lightning strikes.

Everybody got wet and the Sun didn't show up for the Solstice.

So the Mars Explorer Probe named “Spirit” was launched during the fortnight prior to this program. Pickles of the North and I watched it on NASA TV. We're hoping that we can watch the next one too, but it's been getting delayed so much that it's now possible that it may not get launched before the “window” of opportunity closes on July 15th.

Pickles of the North has registered us so that a plaque that's going to Mars with one of the explorers will have both our names on it. Here's my certificate!

I went on about the discovery of some fossils that seem to show the immediate precursors of humanity. So some “missing links” appear to have been found.

These discoveries seem to help establish modern humans (Homo Sapiens Sapiens) as having existed around 150,000 years ago. The three pre-human skulls they have are from about 160,000 years ago.

We have modern human fossils found buried in the Middle East in a ritual that looks to be Neanderthal at about 100,000 years ago.

But art and decoration as such doesn't seem to show up until about 35,000 to 40,000 years ago. Fossil remains of anatomically modern humans accompanied by tools found in African caves which date to about 70,000 years ago are a bit more advanced than what came before, but they do not appear to be doing the art and decoration which show up later. This could change as new discoveries are made, however. This is what has been established as of now.

We are all much more alike than we are different.

So in 1998, a guy named Rick Rush painted a picture of Tiger Woods. It was to commemorate Woods' winning of the 1997, Master's Golf Tournament. The Jireh Publishing Co. published limited edition prints of this painting and sold them.

Judge Chris Clay was the dissenter. He wanted to send the case back to the lower court for a trial so that a jury could decide it. Clay wrote, “It is clear that the prints gain their commercial value by exploiting the fame and celebrity status that Woods has worked to achieve .... The right of publicity is not outweighed by the right of free expression.'”

A whole bunch of briefs were filed with the court by third parties.

On the Publisher's Side: Time, Inc., New York Times Company.

I'm with the court majority on this one, this case shouldn't get as far as a jury trial.

If you could trademark yourself you could prevent anyone from taking your picture on the basis that they might publish it. Martha Stewart would probably enjoy having that kind of control.

This would be a gigantic blow to the 1st Amendment if it went Tiger Woods' way. That's why news organizations filed briefs in agreement with the publisher.

If you could trademark yourself politicians could claim trademark status and allow only phonographs of themselves that they considered flattering to be published.

We did read some mail on this program, but given the computer problems, I'm going to present those E-mails on the Web page for the next program.