It's Monday, 7/3/2000 01:03:10, and I was delayed in getting this page updated both by having to cover PC Expo, about which I'll talk on the next program, and by “upgrading” the software I use to make these Web pages. Turns out that Hot Dog Pro 6.1 is not ready for prime time just yet. This Web page is finally done.

The news of Paul Wunder's death was shocking. I'll certainly talk about Paul on the next program. Of course many of the programs on WBAI are already eulogizing him.

This was our annual gay/lesbian/bisexual/trans pride program. I'd hoped to get through some of the backlog of mail, but I didn't.

At its meeting two weeks ago the Pacifica National Board basically didn't get anything done. But they still refuse to pass a motion that they won't sell WBAI or KPFA. What a bunch. All this and more, as it develops, on the Pacifica Theft Menu.

The WBAI Web cast of was working at 8:39 PM, so it should be all right for Back of the Book tonight.

Paul Williams of UFO Desk is arranging for this feed. And we thank Porus dot com for providing it.

On Thursday, June 29th, we all heard the news that WBAI Operations Director Paul Wunder had died the night before. No one was ready for this. Paul did the Screening Room program on Thursday nights at 10:00 PM, as well as reviewing movies with Joe Hurley on the WBAI Arts Magazine. I have a lot to say about Paul. I suppose that I'll say it on the next program. It's hard to believe that we'll never speak to him again. This is Paul Wunder's Web site.

Folks have been speculating about the possibility of relatively recent water on the planet Mars for the past 20 years, ever since the photographs from the Viking 1 orbiter came back. There are some features on Mars that look exactly like what happens when large amounts of water flow over soil on Earth. These Martian channels and flow features are rarely cratered, so they're not a couple of billion years old.

If these surface features really were caused by water it's possible that there's still some water on Mars, hidden below the surface. This would increase the possibility that there might have been, or might still be, life on Mars. The Martians would be microbes, of course, not the Bug Eyed Monsters (BEMs) of pulp science fiction publications. But if such microbes were found there it would prove that life exists on planets other than the Earth, and it would suggest that life might be ubiquitous in the universe wherever you find liquid water under the right conditions. And that would indeed be something.

Astronomy magazine is back on line with this story. They'd been not publishing on the Web for three months or so. They were still publishing their dead tree version, to which I subscribe.

The full details are set to be published in the June 30th issue of Science magazine. However, they're publishing the article on the Web early because of the media attention this story has gotten. Among other things, they want to clear up some mistakes the media made. Some folks who pass as science reporters are truly clueless.

Here are many of the photographs that this theory of water on Mars is based on. 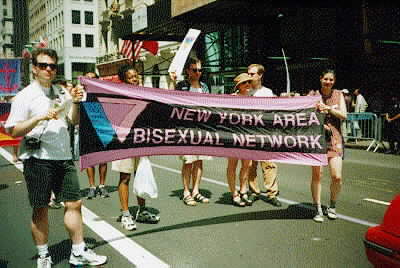 Of course this was Gay/Lesbian/Bisexual/Trans Pride Day, from the month of the same name. I spoke about it at length on the air, including about Hillary Rodham Clinton's participation in the march.

At the left we have a photograph of the New York Area Bisexual Network banner from last year's march.

Hillary joined the march at about 28th St. She got mobbed by press and her SS detail was keeping her still. It was like a clot in an artery. The bisexual contingent had been right in back of the Hillary Clinton “float,” which was just a pickup truck with posters plastered all over it. So we had to get past this blockage. After we passed no one else apparently did! In back of the bisexual contingent was the Radical Fairies. A gap of more than a block was opened up while Hillary got ready to march. When she did she moved very slowly. We wondered if she was a little shy about getting too close to the Radical Fairies.

Hillary Clinton's marching was an opportunity for the more officious among us to act out their fantasies. I tried to snap a photograph of her at one point. The SS was making it nearly impossible to even see her. Either the SS or the HOP marshals or some of the Hillary supporters walked ahead of her with a rope which formed a perimeter that no one was allowed to cross. I didn't relish walking backwards for very long, so I just got to the rope, put my little camera up in the air as high as I could hold it, and snapped a shot in what I perceived to be the general direction of Hillary. We'll see if that one came out. Of course some HOP marshal or sycophant started bugging me about if I was with the media (of course I am). Whatever happened to the idea that this was our march and if you wanted to be in it you'd have to put up with everyone else who was in it?

Oh yes, I call it a march and not a parade because I remember when it was opposed by most people. On the program I talked about how Craig Rodwell, Chair of the Christopher St. Liberation Day Umbrella Committee, was only given the permit for the march after the police realized that a lot of people were going to show up for it whether it was legal or not.

As the first march ended in Central Park on the afternoon of June 28th, 1970, the Gay Activists Alliance (GAA) had several events going on in the Sheep Meadow as part of a “Gay In.” There was a kissing contest going on which broke the world's record for continuous kissing, but which the Guinness Book of World Records refused to recognize because it involved men kissing men. There were also some games and things going on. This was all in an effort to give folks something to do when we got to the park. I remember the day ending with the late Marty Robinson, and a couple of others, blowing joints underneath the GAA banner. Ah, what a day.

Last year Tinkie Winkie marched with Pickles of the North and me. He stayed home this year.

In back of them you can see part of the Bi-Request banner.

Hell, maybe Tinkie Winkie should have gone and marched with the “Stonewall Veterans” contingent. The ranks of those claiming membership in that group have certainly swelled over the past few years. Given the number of people who claim to have been at the Stonewall, where the riots occurred that began the modern gay liberation movement, the damned bar should have been so crowded that the police couldn't have gotten in to raid it!

For my part I was something like 8,892 miles away when the Stonewall got raided in the wee hours of June 29, 1969, so I can't say who was at the Stonewall that night. But I've been in the movement since I joined the militant Gay Activists Alliance on March 26, 1970. Odd that there weren't that many people making this claim thirty years ago. Interesting also that it was only after Ed Murphy died that so many people started claiming to have been in the Stonewall that night for the raid and to have started the riots. Ed Murphy was the bouncer at the Stonewall. He could, and did, vet the claims of those who said they were there. Mr. Murphy was hardly a model citizen, but he certainly did perform the service of weeding out phony “Stonewall Veteran” claimants during his later decades of life.