It's Sunday morning, July 13, 2008 01:20, and I've made what I think is the final update to this Web page. Oh, we are going to be so wrecked on this program after having been up marching all day! But we'll be there and we will talk about the march and other things. It was really wet. We plan to cover other topics too.

Did you know that I've got a brief synopsis of many of the WBAI LSB meetings? Well, I do, and I've updated them recently.

We posted the election results from the WBAI elections on the Web page for the April 21, program.

There's an adjourned LSB meeting scheduled for Wednesday July 23rd, at 7:00 PM, location to be announced. This meeting will be a continuation of the June 26th, meeting.

The June 26, 2008, WBAI LSB meeting picked up where it had left off on June 4. We passed some motions and I made my first Treasurer's report to the LSB.

Once again the meeting got seriously disrupted by that same large nutcase who's made a habit of doing this. The issue of disruptions by this nutcase needs to be dealt with.

This meeting didn't finish its entire agenda, despite grinding on until midnight, so we've scheduled a continuation of this meeting for July 23.

WBAI has an official Web stream of what's on the air at any time! You can go here and pick which type of stream you want! If this stream isn't working let me know. The stream was working at 11:17 PM last night. 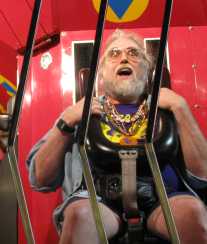 Pickles of the North went to the annual Mermaid Parade on June 21st. She had a lot of fun and was joined by Uncle Sidney, Maxwell J. Schmid and Ratgirl of the West. I just don't go to these things.

Here you can see Max on a ride called the “Super Shot.” Or maybe he's in some sort of mobile jail facility.

I'm told that no one was going on this ride until Max got on, and then others saw him sitting up there and figured that if he could go on it then it was safe enough for all of them to go on too!

I am told that in the end everyone survived this ride. So Max should be back on the air this week.

Anyway, Pickles has a ton of photographs with commentary from that day, and evening, up on her Web site. So go look at Pickles of the North's Web page about the 2008, Mermaid Parade. There are a lot of photographs up there so folks with slower connections to the Internet may have to wait a while for the page to load, especially if you're on dialup. 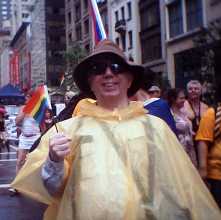 A Wet R. Paul Martin at the Pride March

Pickles of the North and I went to the annual Lesbian/Gay/Bisexual/Trans Pride March yesterday.

Luckily, Pickles had packed a couple of plastic ponchos in her bag and we used them for a lot of the march. Here you can see me during one of the sort of lulls in the storm. It was sunny at first, then it got dark, then it rained a little and then it poured like mad. This cycle was repeated a number of times for the rest of the afternoon. We really got rained on. Most people got soaked, and umbrellas didn't seem to help a whole lot.

The march must have gotten a bit de-populated from the first heavy thunderstorm because we covered the first 18 blocks or so of this march in record time. The weather kept changing all the way to the very end of the march, cycling through more sunlight, gloomy clouds, light rain and downpours.

We managed to get through the entire thing, but my shoes got thoroughly soaked. I think I won't be wearing those old shoes anymore. The pattern of thunderstorms kept up even after we were done marching and were trudging towards a much needed post-march meal with our pal Seth.

The dopiest thing I saw at this march was a banner with a rainbow hued hammer and sickle. The people carrying that banner were mostly pretty young. Don't they understand that the old Soviet Union was a hell hole for gay people?

So we talked about all this and more on the program, including some old war stories from actions with the Gay Activists Alliance long ago.

Pickles of the North talked about a phenomenon that Neil deGrasse Tyson of the Heyden Planetarium is calling “Manhattanhenge.”

Dr. Tyson notes that archaeologists are always looking at how ancient structures are aligned with the Sun, e.g. Stonehenge's alignment as related to the Summer Solstice.

Well, he's got a Web page about the Manhattan street grid lining up with the setting Sun and he says that this phenomenon will happen next on Friday, July 11th, and Saturday, July 12th. When this happens the entire street and both the north and south sidewalks of the avenues in Manhattan will be lit up by the setting Sun for the last quarter hour or so of daylight. So you can go see it, and maybe photograph it, for yourself.

I know that I've observed that at some date in mid-October this same thing can be observed for Flatlands Ave. in Brooklyn. Maybe mid-October was a special day for the Dutch hundreds of years ago!

Of course we talked about George Carlin, who'd died a week before this program. He was quite the individualist. Both Pickles and I enjoyed his comedy and mostly agreed with him on a lot of stuff. Of course he had a connection with WBAI because it was his record album that a WBAI producer played on the air in 1973, which got the station fined by the F.C.C. The case went to the Supreme Court and in 1978, the Supreme Court ruled that the F.C.C. was legally able to forbid some language on the air and fine radio and TV stations if they use such language. But that case also resulted in the “safe harbor” for such language between 10:00 PM and 6:00 AM. It's sad to see him go, and he's going to be missed.