Web links related to the Back of the Book program of July 2, 2007

The next WBAI Local Station Board meeting is scheduled for Saturday, July 14, 2007, at 1:00 PM, somewhere in Newark, New Jersey.

Did you know that I've got a brief synopsis of some of the WBAI LSB meetings? Well, I do. And I update them from time to time. And here's a link to the video of the March 21, 2007, WBAI LSB meeting.

The June 26th, 2007, WBAI LSB meeting was pretty silly in some ways. We met at the Harlem State Office Building on 125th St., between 7th and 8th Aves. in Manhattan.

WBAI has an official Web stream of what's on the air at any time! You can go here and pick which type of stream you want! If this stream isn't working let me know. It was working all right at 9:33 PM (ET) last night.

The Pacifica Foundation, which owns WBAI, has something called the Pacifica Lounge where you can post messages about Pacifica, WBAI and other Pacifica radio stations. This may be a good thing, and of course there are other, long term fora in which to participate.

WBAI is archiving the programs! Just go here and you'll be able to listen to the program any time for the next couple of weeks. Unfortunately, Back of the Book is not one of the programs that you can download, you can only listen to it on line. But maybe someone will change that at some point. NOTE: The archives have not always been behaving properly of late. They have been fixed, but we can't guarantee their condition. If Back of the Book isn't archived this time I'll post an archive myself. Also note that they have been calling the Back of the Book archive the Carrier Wave archive. You should go by the date of the program until this gets rectified, or just listen to both programs in this time slot!

Well, Pickles of the North and I attended last Sunday's annual Pride March. We met some folks we haven't seen in a year or so and we got to see what some folks are doing these days.

We'll be talking about the march, and I'll probably reminisce about those olden days a bit, tonight on the radio program. And of course we'll play In My Life by The Beatles at the end of all of that.

And June was a pretty interesting month for gay/lesbian/bisexual/trans issues.

Uncle Sidney played some audio of the attacks on marchers who were trying to have a small Pride March in Moscow, but the right wing creeps and the Russian Orthodox Church creeps physically attacked them, giving the current successor to the Cheka, NKVD and KGB the chance to move in and beat the marchers up some more and arrest them, along with international observers.

The New Jersey legislature has passed a law banning discrimination against transgendered people.

We plan to talk about Coney Island and what's happening to it these days on the program.

In the images on this page we have two photographs of Stillwell Ave. looking north.

On the left we used to have the miniature golf range, which only got put in there a couple of years ago. There was also space that had been used for various rides that came and went over the years. Now it's all just devastated, torn-up earth. They were putting in the plywood fencing on the day we took this photograph but they hadn't gotten all the plywood up on this side yet. 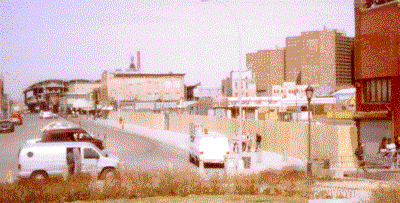 On the right we used to have the famous batting cages, the rock climbing amusement, two different go-kart rides and a water ride. All are gone now, bulldozed by Thor Equities. You can see the plywood fencing that they'd put up on that side of the street by the time we took this photograph. The plywood hides the city block sized scar that was all that was left after the bulldozers had done their damage.

Some think that the big real estate developer Thor Equities bulldozed everything in an effort to pressure the City of New York into giving in on the company's plans to erect gigantic condominium towers right next to the Boardwalk at Coney Island.

Some speculate that the idea may have been to give the city the choice between the bulldozed blight and an active construction site.

And it doesn't stop there. 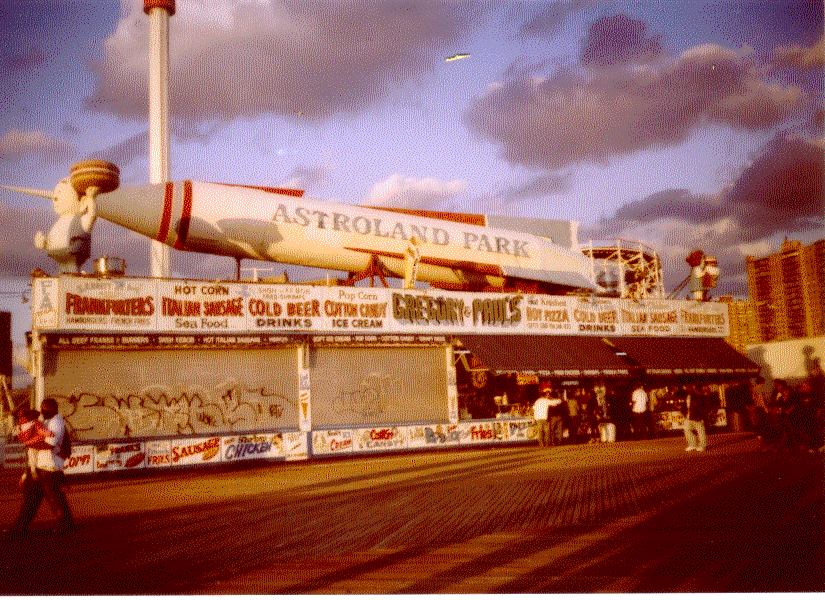 Thor Equities is buying up a hell of a lot of Coney Island. They've already bought the land under Astroland amusement park, which is full of rides, including a great many of the rides for younger children at Coney Island. Astroland also runs the famous Cyclone roller coaster, which is on land owned by the New York City Parks Department. It's the oldest wooden roller coaster in America, celebrating its 80th anniversary this year.

Pickles and I are hoping that Coney Island isn't going to be destroyed, to become another gated community or block of condominium high rises for the ultra rich. If that happens then it would only be a matter of time before the rich expropriated the Boardwalk and beach at Coney Island for themsevles to the exclusion of the rest of Brooklyn and the world. And that would indeed be a tragedy.

We hope that you'll pledge to WBAI while Back of the Book is on at that time.

If you listen to the radio program on tape or via the Internet archives you can send us a check. Regular one year membership is $25. So please send a check made payable to “Pacifica/WBAI” and send it to: