It's Saturday, 7/15/2000 07:11:41. This Web site is on its new server. The “Saddle Pals” (Max Schmid, Sidney Smith and I) showed up for the program and we talked about our old friend Paul Wunder who recently passed away. I also did a little something on the program about the horseshoe crab “Nature Tour” that the Parks Dept. held last month. Owing to the amount of time we spent eulogizing Paul Wunder I did not get to the mail. I think this page is done now.

The Pacifica National Board says that they're going to hold their next meeting in New York. Of course the last time they “met in New York,” over two years ago, they actually held their meetings in Secaucus, New Jersey! All this and more, as it develops, on the Pacifica Theft Menu.

The WBAI Web cast was NOT working at 9:49 PM. It's entirely possible that Back of the Book won't be Web cast tonight. You could try it anyway though.

I have since been informed by one listener that the Web cast was working during the program.

This is the latest WBAI RealAudio feed.

On Thursday, June 29th, we all heard the news that WBAI Operations Director Paul Wunder had died the night before. No one was ready for this. Paul did the Screening Room program on Thursday nights at 10:00 PM, as well as reviewing movies with Joe Hurley on the WBAI Arts Magazine on Friday evenings. The Saddle Pals spoke about Paul Wunder and his importance in our lives and to WBAI on the program. This is Paul Wunder's Web site. Whoever modified it got his dates wrong, but do sign in.

We talked about Paul as an old friend who has passed. Some of what we said in the wee hours of the morning will have to stay unwritten for a while, however. So if you listened you heard a lot!

We spoke very little of the public Paul Wunder. We knew him as a pal. One of the things Paul Wunder couldn't stand was hypocrisy. I think he would have liked the program we did about him because it wasn't a hagiography. We spoke of Paul's great contributions in terms of teaching us, and many others, how to use the equipment at WBAI decades ago. We spoke of his sometimes wacky habits and of the “Ask Doctor Science” segment he used to do on Saturday's at 6:00 AM as part of Simon Loekle's program Why The Revolution Hasn't Come Yet.

The “Ask Doctor Science” segments featured Paul, identified on the program only as Doctor Science, discussing all sorts of things, although science and technology were predominant. One of the more famous, and also the shortest “Ask Doctor Science” occurred one morning when host Simon Loekle opening the segment by asking, “Say, Doc, how do you like your women?” To which Doctor Science replied, “With my dick in them, Simon,” at which point that particular segment ended.

Other memorable “Ask Doctor Science” segments included detailed instructions on how to make sure that the cocaine you've just bought isn't really just baking soda or something, instructions on how to bake marijuana into things like cookies, while retaining the full potency of the active ingredient, without putting any stems, seeds or unnecessary cellulose in them, and discourses on cocamine and its affect on users of cocaine.

Of course “Ask Doctor Science” covered other, more general science topics, but for some reason the naughty ones are remembered best.

Paul also wasn't afraid of experimenting with drugs on his own. Many's the lovely discussion the future Saddle Pals had with The Doc about these issues.

Paul also was one of the founders of “The Den,” a small room at WBAI which no Management will admit ever existed. The Den featured a huge SONY monitor that was on 24 hours a day running video tapes, cable from an unknown source and even experimental video sources. Besides being a place of great camaraderie The Den also served to keep WBAI functional. It is no coincidence that Paul Wunder became the Operations Director of WBAI. He had been doing that job as a major denizen of The Den for twenty years by the time he was hired.

A memorial event was held for Paul at The Screening Room, on Canal and Varick Streets in Manhattan on July 6th. The folks running it had expected about 60 people to attend. Over 200 showed up, including actors, actresses, others to do with the world of movies, lots of current WBAI producers and many former WBAI Staff, some of whom haven't been connected to the station for years. Everyone wanted to have some way to say goodbye to Paul.

As we said on the air, Paul Wunder was our friend, a wild and crazy guy, a sometimes painfully honest man and a substantial part of the glue that has held WBAI together for something like the past quarter century. He will be missed as a friend, as a colleague and as someone who could see through bullshit and keep WBAI functioning.

So on June 17th, The Parks Department held what it calls a Nature Tour titled “Horseshoe Crab Romance” at Gerritsen Beach in Marine Park, Brooklyn. For me, it was completely irresistible.

I've gone on about horseshoe crabs a whole lot before on the program. But this time I was able to go watch them coming ashore to mate. Of course mating for these extremely ancient life forms is not quite the same as it is for relative latecomers, like us, and the dinosaurs.

These two at the left are in the process of making more of themselves. The female is in front; they're only in about three or four inches of water. She digs a shallow pit and deposits her eggs in it. She then moves forward a little bit. The male, who is locked onto the spikes of her rear carapace, is then brought over that shallow pit with the eggs in it. He then releases his sperm. Some of his sperm will probably fertilize some of her eggs.

This may all sound rather haphazard, but it's kept the horseshoe crabs around long enough to see the dinosaurs come and go and to see us show up. Maybe they'll even see us go. 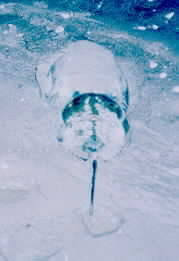 Horseshoe crabs have a lot of stamina. They don't just do the latch on and deposit tango once. They do it over and over again throughout the night. The Nature Tour participants had watched the pair to the right do it once already. The female having dug herself down pretty well in the silt of Marine Park. She then dragged her companion along and started digging another hole. She's covered in mud from the first, um, “reproduction event.”

One thing that caught my attention, and which I would never have known from simply reading about horseshoe crabs, is the rhythm they use when mating. During the time when the male is releasing his sperm he moves up and down a little, as much as he can while restrained by the mating grip he has on the female. The female also appears to show a little movement while she's depositing her eggs. The interesting thing to me is that their rhythm is obviously the same as ours is! The basic sexual rhythm in humans is about 1.25 Hz, or one pulsation every 0.8 seconds. If you are in a hotel room and hear a thump coming from next door every 0.8 seconds you know what's going on over there. This rhythm, however, is more basic than that. The penis and vagina both pulsate at this 1.25 Hz rate during activities related to human reproduction.

So even though fertilization occurs externally for the horseshoe crabs they have that ancient rhythm that we have as well! Obviously we share the genes that cause this rhythm with these creatures. So the next time you're engaging in an activity that has you, or a part of you, pulsating at 1.25 Hz remember that you share this rhythm with the horseshoe crab! I make no guarantees about whether or not this thought will enhance the moment.

It was a dark and cloudy night, so at first we saw only some horseshoe crabs, and a couple of small, actual crabs, running about near the shore. But after a while there was a slight thinning of the clouds to the southeast and some moonlight shone through. Well, that did it. The horseshoe crab has a special set of non-imaging optical sensors that are sensitive only to moonlight! Once some moonlight got onto the water the mating activity began. We watched some male horseshoe crabs try to muscle in (not mussel in) on some couples' action. Basically, they tried to shove the other male off the female. Although none of the interlopers we saw were successful, it was amazing to me that they always picked the perfect angle to exert the most force on their rivals. These creatures don't even have brains! 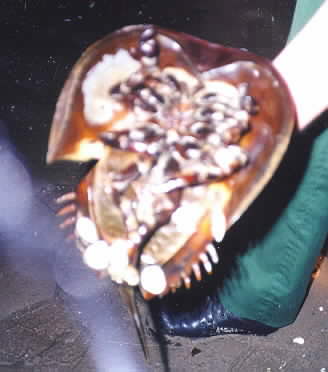 I reluctantly show you this rather blurry photograph on the left, and I apologize for the lack of quality to it. My point and shoot camera just wasn't doing too well that night. In fact I have a photograph of some empty water where a creature skipped out of the frame before I could catch it, and I've got one whole photograph that has absolutely nothing in it. Maybe I need to get a new camera.

It was a really interesting evening, despite a few overly privileged ten year olds. Pickles of the North and I got to see these creatures in action, after having read a lot about them and having seen them just skittering around under the water here and there. The Park Rangers' sign-up sheet indicated that about 60 people showed up for this event.