It's Tuesday morning 8/1/2006 04:46:41 and this Web page isn't done yet, but I've added a little to it. I'm hoping to get it updated completely some day. Well I've discovered that the problem I'm having getting my Web page editor to work is being caused by something that's screwed up on my computer. I'm still trying to get that fixed, meanwhile here's a Web page that's been cobbled together in various ways. I hope to do updates and all in the future, when I hope that I have my editor back again!

Did you know that I've got a brief synopsis of some of the WBAI LSB meetings? Well, I do. And I update them from time to time.

The July 11th, LSB meeting was held in Manhattan. The big thing that happened was that the faction showed up with an E-mail from Pacifica Executive Director Greg Guma telling everyone that WBAI General manager Indra Hardat “... has chosen to return to her regular position as WBAIs Business Manager, effective as soon as a new Interim General Manager is appointed.”

The faction leader showed right up with a motion to get a new interim General Manager as soon as possible.

Now Ms. Hardat is the best General Manager WBAI has had in decades, so this was a bit of a shock. There was something of a second shock when Ms. Hardat issued an E-mail of her own the next day saying that, “The reports of my resignation have been greatly fabricated.” Oops! Something funny's going on here. Here's her full statement.

We're all awaiting full clarification from both the interim General Manager and the Executive Director about what exactly is going on here. My guess is that the Executive Director is looking to terminate Ms. Hardat. Why would he fire the best General Manager that WBAI has had in decades? Well, I know that the faction is really after her. She won't knuckle under and give the faction leader a patronage job at the expense of the Paid Staff, and she has made mention of corruption at WBAI, which is the sort of charge which the faction currently in charge is especially sensitive to. So maybe she's being lobbied out of her job now. What a shame this could turn out to be!

I have written a statement about the constructive removal of a LSB member and sent it to the PNB, the WBAI LSB and various public mailing lists and bulletin boards. His 6 month “suspension” is now in its 17th month.

There is a new, official stream for WBAI! You can go here and pick which type of stream you want! If this stream isn't working let me know. It was working at 8:53 PM last night.

WBAI is now archiving the programs! Just go here and you'll be able to listen to the program any time for the next couple of weeks. Unfortunately, Back of the Book is not one of the programs that you can download, you can only listen to it on line. But maybe someone will change that at some point. NOTE: The archives have not always been behaving properly of late. They have been fixed, but we can't guarantee their condition. If Back of the Book isn't archived this time I'll post an archive myself. Also note that they have been calling the Back of the Book archive the Carrier Wave archive. You should go by the date of the program until this gets rectified.

Once again we are pitching tonight! Yes, WBAI is having another emergency Summer 'thon and Back of the Book gets to participate. Please call in between 1:00 AM and 3:00 AM to show your support for the program. We'll really appreciate it. The number to call, from anywhere in the world, is 1-212-209-2950. For $25 you become a member for one year and you'll be able to vote in the upcoming elections where you can maybe help to keep the faction currently in charge from completely destroying WBAI.

UPDATE: We pitched on this program and we were able to raise $1,095. Thanks to everyone who pledged or sent in a check. Please be sure to fulfill your pledge as soon as possible if you haven't done so yet.

Web-only special! The following is only going to be available on the Web, owing to the fact that we can't publish photographs on the radio - yet. We present to you Pickles of the North, Explorer! Below is a commentary by Pickles herself. 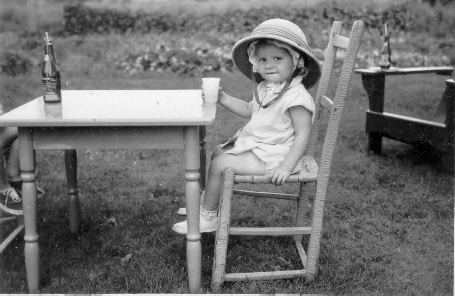 Here I am at a tender age splitting a refreshing beverage with my older brother Dado Of The North. Dado's feet are visible opposite me.

We were taking a break from hiking in the Great Northern Hinterland, a land exploding with black flies, mosquitoes, chipmunks, moose and the ever elusive loup-garou, the Northern offshoot of the werewolf.

Taking advantage of the brief summer season, we are about to re-embark on the search for the loup-garou. I think. Or maybe it was blueberries.