Web links related to the Back of the Book program of August 27, 2007


What a mess my computer situation is. This page has been updated on Sunday afternoon 9/9/2007 at 15:24 and it's finished. It doesn't have all of the usual stuff on it because I've had such bad computer problems that I haven't been able to get to it until today, and I'm having to do all of the HTML coding by hand, without my usual editing software. I'll be doing another radio program mere hours from now. If you really like all of the stuff that I usually put at the top of the Web page you can view it on the other Web pages for my radio programs.

On this program we talked about what some are calling a hole in the universe.

This thing is a void, of which any number have been discovered over the past couple of decades, but this is the biggest void ever found. This thing is about one billion light years wide!

Not only does this void have a paucity of ordinary matter like stars, planets, gas and dust, but it appears to be pretty much devoid of that mysterious dark matter stuff as well.

It's interesting how they detected it. They found that some of the cosmic microwave background radiation (CMB) was just a tiny bit cooler than average in that part of the sky. This was owing to something called the late integrated Sachs-Wolfe Effect. Because the void was expanding under the influence of that other mysterious and recently discovered thing, dark energy, the CMB lost a little bit of its energy as it passed through this expanding bit of space-time. This energy loss was manifested as a slightly lower temperature.

So it would seem as if maybe that part of the universe may be experiencing more of an effect from the presence of dark energy.

Well, this program had us doing a number of things about WBAI and the Pacifica Foundation which owns WBAI.

We talked about the meeting of the Pacifica National Board (PNB) at the end of July. There were some dire things said about not only WBAI but the entire Pacifica network's financial situation.

Lonnie Hicks, Pacifica's Chief Financial Officer (CFO) reported the following to the PNB, “The Network will surely crash by December 2007 if we do not strictly control expenditures in the face of declining revenues. Moreover, all stations will be impacted in the new year if a single station has a large shortfall — that is to say we have few reserves left — so now what happens at one station will affect all stations and the national office and the Board budget as well — that is to say that other stations will have to support sister stations next year if budgets and drives fail.”

We also talked about how the WBAI Local Station Board (LSB) has simply avoided dealing with WBAI's budget for fiscal year 2008. Instead of proposing a real budget, as we're supposed to do, the majority, a part of the faction currently in charge at the radio station, proposed a 3 month budget that called for no layoffs. Sure, that's easy to do. And then after that 3 months the layoff situation would be even worse than it would have been had it been dealt with earlier.

The faction just wanted to be able to look like they were avoiding layoffs until the elections are over.

In any case, some folks have set up a Web site that deals with a number of things that are Pacifica-related and they have this rather amazing file that seems to include the actual report materials made to the PNB as well as the questions and answers given at that meeting. Click here to get the .PDF file containing the transcript of the PNB meeting, it's about 3 MB in size.

If you want to hear what was said you can click here to go to a Web page with the audio files of the meeting. And those audio files are labelled, so you don't have to slog through hours of other stuff if you're looking for the CFO's report or reports related to WBAI or whatever.

We also discussed a cart that's been playing on WBAI that's telling lies about one non-faction LSB member. He'd contacted people on his own mailing list and offered to hand deliver their donations to WBAI before the deadline. This to avoid the faction currently in charge stopping people's donations from getting recorded in the WBAI database in time for them to be able to vote in this important election that's coming up. Well, the cart says that he's “diverting” the funds away from WBAI. That's simply a lie. We completely debunked the lies on the air.

Ironically, this cart starts out saying that it's an urgent message on behalf of Program Director Bernard White. It really is ironic, given the revelations that came up at a LSB meeting three and a half years ago. The person he's attacking has called for the Program Director to be fired for cause a number of times.

I also read the following motion which I made at a LSB meeting last year:

And that motion was voted by down the faction currently in charge. Perhaps you can see the irony now in the cart that's being played on behalf of the Program Director.

My computer is a wreck. If you want to see it here it is. I do plan on updating this Web page when I can. 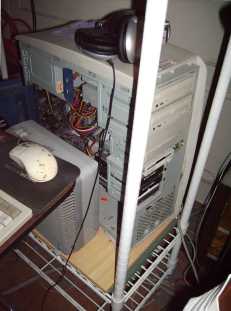