Web links related to the Back of the Book program of September 15, 2003


It's the wee hours of Sunday morning 9/28/2003 02:00:40 and this page is done. I'm glad to announce that the Pacifica bylaws were passed at long last! So this was the program's 17th anniversary! We talked about that a bit, and maybe we had some fun into the bargain. I've got the E-mail we read on the program below plus some more updates. As always, the tense of the below changes according to whether it was written before or after the program. Shouldn't be that upsetting.

Here is the latest on the saga of Pacifica. The big meeting of the interim Pacifica National Board (iPNB) took place in New York City, September 19-21, 2003, at The Synod House of The Cathedral of St. John the Divine, 1047 Amsterdam Avenue (at 110th Street), New York, NY 10025, moved from its previous location of a hotel in midtown.

Mr. Roger Manning from the listener group Coalition for a democratic Pacifica New York (CdPNY) attended and has posted his notes from the meetings, along with other documents on the group's Web site.

As of September 15, 2003, the Pacifica Foundation has new bylaws! More about that here.

WBAI now has a program schedule up on its Web site. The site has gotten many of the individual program pages together to provide links and such, so check it out. Here's a schedule made by a listener who has Web links for various programs and producers.

Our colleagues from Off the Hook now have both a RealAudio streaming web cast operating, and a new MP3 stream both of which were working at about 9:28 PM last night. The MP3 feed is now the preferred feed.

This program marks the 17th anniversary of Back of the Book! We'll be reminiscing a little bit as well as doing the usual ritual of reading Franz Kafka's “Before the Law.” You can read the story here.

I'm glad to report that the Fox News Channel's lawsuit against Al Franken has been bounced out of court, and Franken's book started out on the New York Times Best Seller list. Ah, the wages of attempted media suppression.

Pickles of the North will tell about her journey to the North Pole to fight the oppressor Santa Claus.

The Middle Third is over and the Autumnal Equinox will arrive on Tuesday September 23, 2003, at 6:47 AM (EDT). Here are some more dates.

So I told about my date with an endoscope. Yes, they took a scope and they stuck it up my endo!

What I had was something called a Flexible Sigmoidoscopy, which was no fun at all, and which was pretty dreary preparing for. It was done because I'm at an age when this procedure is a good idea.

The worst problem I had with this procedure was that they fill your gut up with air in order to get a better look at the lining of the colon. That was painful! I felt like I was going to have to show up at the Macy's Thanksgiving Day Parade! And afterwards it got worse. Of course the air they pumped in was expanding because my innards are a lot warmer and more humid than the room temperature air was.

The bottom line is that the doctors and nurses had such a good time doing this that they want me to show up again in October so they can perform a full fledged colonoscopy on me. If I survive that procedure I'll certainly tell all about it on the second program in October.

Of course we got to some of the mail on this program. Besides some birthday cards, we also had some E-mail, which I'll post here.

We start with a little computer joke from a listener.

New software to detect computer attacks called "Paul Revere" One light will flash on your desktop if by LAN, two if by C:

Next we have a listener who E-mails us via his cell phone commenting about the murdered New York City Councilman Davis.

Perhaps “know thine enemies” should have been the catch phrase? Then psychotics act outside of such witticisms.

Next we have a compliment from a listener who also has a link to a photograph of this planet from our Earth Invasion Fleet which is heading for Mars.

Thank you for the best show on radio. Here's something you might enjoy:

This is a new picture of the earth and the moon taken by a European probe on its way to mars.

Regular listener, contributor and correspondent Zigman sent us something from the ACLU site about the USA Patriot Act. For reasons of copyright I'm just providing the link to the article here. Oh, and the operative phrase is “Bite my shiny metal ass.”

This item was forwarded to you from ZIG MAN on the American Civil Liberties Union web site with the comment:

First, let me say, Thank you for wishing me well after my surgery, its just that now I feel like an incomplete encyclopedia, NO APPENDIX!!!! >>>GROAN!!!!<<<

All my best to both of you, and the “Kiss my shiny metal ass” Faction there @ 'BAI,

This item is also available on the web at:
http://www.aclu.org/SafeandFree/SafeandFree.cfm?ID=11904&c=206

Egad, another complimentary one!

Hey Paul/ i have been listening to u for a few years now and i find your show interesting/ and i think it is courageous of u to reveal that u are bisexed/ because the bisexed,get attacked by the homosexed and the heterosexed/ they find it difficulty to accept that there is such a position/ (no pun intended)

Good show/ Keep at it

Actually, Micky Rooney is a trifle taller than I am!

Next we have an E-mail from an Internet listener.

As always - Love having you in the house.

Listening on the web from Maple Grove, Minnesota.

my dear r paul & pickles, i haven't written to you in such a long time, but i still continue to tape the show. i'm susan from 17th street in brooklyn. you've been talking about your diabetes & all the changes it puts you through & i can truly understand. two & a half years ago, (one month after my 44th birthday) i had a massive heart attack. it left me with only 54% of heart muscle. i now have a pacemaker & defibrillator & am on 9 medications. i can do maybe half of what i was able to do prior to the attack. it's been a long recovery. learning to deal with my limitations has been the hardest aspect of it all. but i've listened to your show & must thank you for all the laughs you have provided. a perfect example is your memories of ethel & the candy store. where on 7th avenue was it? i also enjoy hearing pickle's lovely voice. i think we should call her saint pickles. we, your listeners know what a nut you probably are to live with, so i'm just giving her her props. take good care of yourself. i can't imagine wbai without you. susan

Jeez, Susan I'm sorry to hear that you've been going through an ordeal here. I'm glad that the program has given you some laughs though. Ethel's candy store was a 175 7th Avenue. The building is still there, although the entire half block of buildings which were across the street from us in my youth are gone. In about 1960 or 61 a guy bought the building and kicked Ethel out, consolidating her candy store with the junk store, formerly a beauty parlor, at street level in order to make a larger space for his dry cleaning business. I never found out what happened to Ethel. There was no warning, she was just gone one day.

Yeah, Saint Pickles. She's one of the six women on the planet who can stand me (one in a billion).

You take care of yourself too, Susan. We need all the listeners we can get! 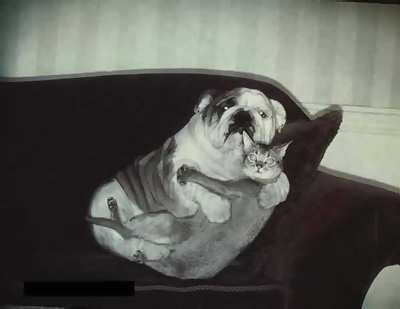 BAI was off the air for the whole black out and then comes on with ___ _______ ranting about things that belong in the domain of an alternate universe. Does this mean that the OEM should not go home and instead work on how to exorcise her from the transmitter? Regards, MK

OEM? Original Equipment Manufacturer? WBAI, of course, doesn't have a backup generator or anything. I've been told that during the 1977, blackout the Chief Engineer rigged some power up at our transmitter room in the Empire State Building and put some coils of wire on a broomstick handle which he stuck out the window. This allowed WBAI to have a limited broadcast range during that blackout. Gone are the days.