Web links related to the Back of the Book program of October 16, 2000

As a “Late Night” or “Overnight” program producer I pitched. Of course I want to make sure that listeners know what they're contributing to, it's an informed consent sort of thing. We raised a commensurate amount of money. From what I've seen I am not convinced that any program will get credit for what it raises. Also, there's the ethical dilemma of what's going to happen to the money that listeners send it at this time? One of the big projects that the Pacifica foundation, which owns WBAI, said it would embark on at its last National Board meeting was a “study.” From what I've heard, this study is to employ some consultants who will tell Pacifica Management what the best thing to do is. What's the likelihood that they'll simply tell Pacifica Management what they want to hear, that Pacifica Management is a bunch of geniuses and should do what they want to do in the first place? Pretty likely, I'd say. Oh, and what will this study cost? Well, the Pacifica National Board says $500,000. Is this a good way to spend listener sponsors' money?

Oh yeah, besides pitching I'll be getting to as much mail as I can again tonight. As usual, things may happen on the air that I didn't plan, so be sure to check back here over the next few days for the usual updates.

The Pacifica National Board is still trying to set up “shadow ” Local Advisory Boards (LABs) around the country in an effort to undermine the current LABs. So says Pacifica National Board member Tomas Moran in an interview with Dennis Bernstein on Flashpoints as aired on sister station KPFA. In essence, this increasingly elite Pacifica National Board, which recruits people who would seem more likely to be the targets of a WBAI or Pacifica report than to be on its National Board, is trying to fire the listeners. And we thought they were going to come for us first! Additionally, some listeners are getting together a letter of support to Amy Goodman in light of the hard time Pacifica Management is giving her. In the past week Pacifica Management has escalated its attacks on Amy Goodman and Democracy Now! Details on all this and more can be found at the Pacifica Theft Page.

WBAI was being Web cast when I checked it out at 9:35 PM last night. Here's the Web cast from porus.com.

I was complaining on the last program that I was supposed to have DSL as of September 29, but that Verizon aka Bell Atlantic, hadn't managed to get it to work yet. As of today, October 22, all I have is a blinking light on a DSL modem, which means that there's no active connection yet. Oh well, at least I have company.

The New York Times should be commended for having a “Science Section” at all. However, sometimes their Q & A section blows one. This is one time when they've given an answer that ignores a major reality. 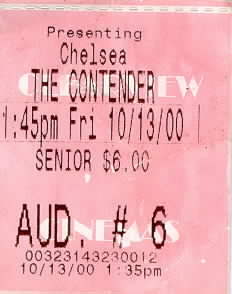 On the air I was talking about an event that has informed me in no uncertain terms that some younger folks think I'm elderly already. The male ex and I went to a movie, he paid, and he got back a lot more change from a $20 bill than he'd expected. It turns out that the young man selling tickets just looked at us and automatically assumed that we were over age 65!

Well, we're both 53 years old, which I'm sure IS considered ancient by some young folks, but surely anyone can see a difference between 53 and 65, can't they? Well, maybe not.

I recall that when I was in my late teens or early twenties there was some politician in New York City who held an appointed position. He got fired in some political machination or another. While the cameras rolled as he walked out of his office for the last time the reporters asked him, “You're only 54; you're a young man. What are you going to do now?” I was surprised at this. Fifty four - young? I thought that 54 was on the very sill of death from old age. Well, I still think that the term “young” when applied to a 54 year old man is bull____, um, inaccurate, but I don't think that I'm quite as close to death as I'd thought this age was back in my indisputable youth.

Getting older is no picnic, but it does beat the hell out of the alternative. With luck I'll eventually get elderly and I hope that when that happens I'll be able to enjoy it and annoy people at least as much as I do now.

Oh yeah, the movie The Contender was quite good.

This weekend there's a tri-state area bisexual conference being held at NYU October 20th to 22nd.

I'll be talking about the peaceful world we live in, including the attack on the USS Cole. Ali Abdullah Saleh, dictator, technically “president,” of Yemen has finally come off his stupid statement that what happened was an internal explosion. Just look at the photograph and you can see that the hull plates are bent inward, which would be caused by an explosion outside the hull. If the explosion had been internal the plates would be bent outward, of course.

I did get through some of the mail on the program. Sometimes it's just good to hear from folks who are writing to tell me that they're still listening.


Just a short note to let you know we're still here in a vast multitude listening to your every word and always wanting more about science, computers, and social issues. Keep it coming.


The web cast was working for your last two programs. Other than on Friday, August 1, the day Report to the Listener was broadcast, the web cast has been working at all other times when I've tried it. Those are just the facts.

You almost had three web listeners last night, but our friend who doesn't know about that evolution stuff, because she doesn't think she evolved told us you didn't sound like you were from Brooklyn and then decided to go home.

I guess I'd better try to figure out why most of our lights aren't working (even though the computer and air conditioner are) if we want to be able to make those helmuts, so we're not all abducted by the aliens.


LONG TIME................NO CONTACT. I WAS TICKLED PINK TO DISCOVER THAT YOU INCLUDED “STICK MAN DANCE” ON YOUR WEB PAGE. I bought my computer in April 1999 and I'm pretty much the novice on the internet. However, I have stumbled on a few very cool sites. I originally gravitated toward the 'artsy' sites, but soon found that there are several interesting sites in the optical illusions category. I'll e-mail you again soon with the addresses.

I still listen to your show as often as I can. I work for VERIZON now (formerly known as Bell Atlantic), and before this STRIKE, my work shift was 7:30 am to 2:30pm. Just telling you this to let you know that if I miss your show it's only because I'm asleep by 11:00 pm most nights. Last time I tuned in I felt kind of alienated from ' the crowd'. Miss the old gang.....Tracy from LI, Master of the Universe etc.           Anyhow, glad to hear that Ben the Doorman is still hanging in.


Egad! Susan works for Verizon. Maybe I can get her to put in a good word so I can get DSL working!

And, finally, we have a missive from a listener who doesn't fully agree with what I say, but who does like the program.

Your show rocks. Keep it up brotha, vote bush. God is among us though, but ur da man!