Web links related to the Back of the Book program of December 5, 2005


It's Sunday night 12/18/2005 21:58:24 and this page is not done yet, but it is updated. I'll be back to do more on it in the near future. It's cold outside! But there have been other reasons why this is a pretty sparse page. I really do have to update all of these Web pages soon. Maybe I can get it all done in the next fortnight. Check back for updates.

The next WBAI Local Station Board meeting is scheduled for Tuesday, December 20th, 2005, at 6:30 PM location to be announced.

Did you know that I've got a brief synopsis of the older WBAI LSB meetings? Well, I do. And I'll be updating it soon.

The November 22nd, LSB meeting was held in Brooklyn. So Susan from Brooklyn came to the last LSB meeting. She got to see some of the stuff that goes on at them. The faction tried to pass a bylaws amendment, I argued that they couldn't vote on it because it was not the same calendar month. They voted that they could go ahead and do it and they did vote on it and announced that they had passed it. But I pointed out that they hadn't gotten the required number of votes for it. Surely they can count!

We also still have the issue of the member whom the faction has illegally suspended. I pointed out that his six month suspension was in its ninth month, but the faction likes to use their majority to exact revenge on people for their faction boss.

The guy who always denounced me denounced me, along with another Staff member who's demanding fiscal accountability at WBAI. He may be very surprised at the next Finance Committee meeting.

Our colleagues from Off the Hook now have both a RealAudio streaming web cast operating, and a new MP3 stream. The MP3 feed is now the preferred feed.

WBAI is now archiving the programs! Just go here and you'll be able to listen to the program any time for the next couple of weeks. Unfortunately, Back of the Book is not one of the programs that you can download, you can only listen to it on line. But maybe someone will change that at some point.

This is a bad time of year for those of us who like the sunlight. There just isn't much of it around! I am most bothered by the early sunsets. The earliest sunsets of the year are about to occur. They will occur on this coming Wednesday and Thursday when the Sun will set at 4:28 PM (ET). If you don't live near New York City you can check out when the Sun will set for you by using this Web site.

Winter will begin on the Solstice, December 21st, at 1:35 PM (ET). Yeah, it'll be Winter but it will also mean that the days begin getting longer the day after the Solstice. For more on the seasons and sub-seasons check out this page.

We did get to all of the outstanding mail on the air during this program. Here's the E-mail that we read.

Hello,
I came across this while web surfing. As a chronic listener to christian radio i can see this being mentioned as a serious argument soon. 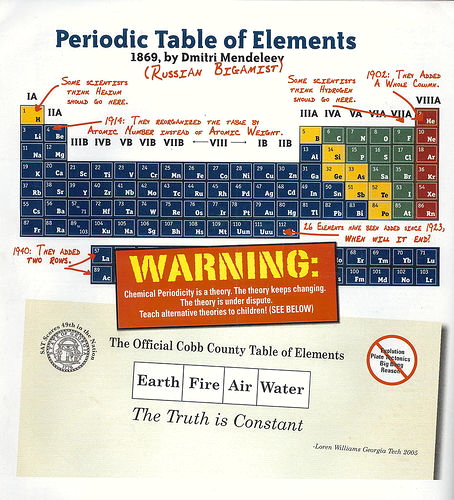 Jeez, this isn't too far from what they're trying to do! As I've said before, Darwin's Theory of Evolution Through natural Selection in biology isn't the only thing the fundamentalists have to swat down if they're going to avoid anything that contradicts their superstitions. They also have to get rid of geology, astronomy and other sciences. I can see where the Periodic Table of the Elements might be on their list, albeit a ways down from evolution.

Next we have a listener who usually sends us cryptic E-mails via text messages, but now he's got another means of communicating and more to say.

I don't think that a Web page is going to hold them at bay.