Web links related to the Back of the Book program of December 25, 2000

So it's Sunday, 12/31/2000 16:23:41, and I'm finishing this page on the last afternoon of the Twentieth Century. Of course all sorts of things are happening at WBAI. See below for links. We wished you all a merry Isaac Newton's birthday on the air, and I wish you a merry new year/century/millennium now! I think this Web page is finished for this thousand year stretch.

Be sure to look at the Pacifica Theft Page for more about the breaking news over WBAI's midnight coup. General Manager Valerie Van Isler has indeed been fired, and former producer/host of Talkback Utrice Leid has been named Interim General Manager.

WBAI was being Web cast when I checked in at 10:50 PM last night. So you should be able to hear the Web cast from porus.com.

Well, we have a lot of people talking about space aliens and stuff, but there are serious questions about extraterrestrial life these days.

In the past fortnight the Jovian moon Ganymede has joined Europa and Callisto as probably harboring an ocean under its icy covering. It is theorized by scientists that liquid water is the main thing needed for life to arise in an environment.

Some scientists have found magnetite crystals in the famous Martian meteorite ALH84001. On Earth, these forms of the crystal are not found outside of the biological processes of magnetotactic bacteria.

This bolsters the idea that the possible micro fossils in ALH84001 might be the remains of actual bacteria, or something very like bacteria, that were having a hard time staying alive on a rapidly drying and cooling Mars hundreds of millions or even billions of years ago. NASA has a lot of information on ALH84001.

We're having a special program tonight. In fact we were planning on having a special program well before the midnight coup. Uncle Sidney Smith and Maxwell J. Schmid will be there along with Pickles of the North and Rat Girl of the West. We'll celebrate the final Back of the Book program of the 20th Century and of the Second Millennium. Let's hope it's not the last program — period! 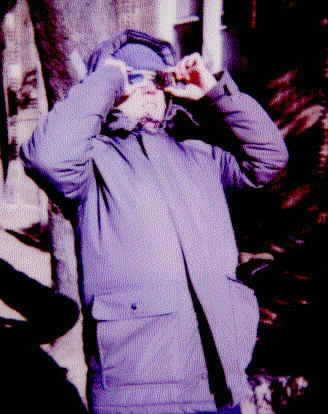 In honor of the last Back of the Book program of the 20th Century we're staging a partial solar eclipse beginning at 11:09 AM, peaking at 12:47 PM and ending at 2:21 PM. At maximum 56% of the sun will be eclipsed. The last time I was around for a partial eclipse the thing that impressed me the most was the weird light we had during it. Be careful! Do not look at the Sun directly!!! Some people paid no attention to warnings during the last big eclipse and the next day there were hundreds of people showing up at hospitals for various degrees of blindness.

In the photograph on the left you see me watching the partial eclipse right about at its peak. I'm using the special glasses provided in the January issue of Astronomy magazine. For the more mundane aspects of low angle, Winter sunlight I'm also wearing wrap around sunglasses. The sunglasses made absolutely no difference in the image seen through the special eclipse glasses that Pickles of the North and I used that day. The special eclipse glasses reduce the light from the sun by hundreds of thousands of times, I'm told. Modern marvels like these glasses are the only safe way to look at an eclipse in progress. Of course a pinhole in a piece of cardboard will work very well also and it's perfectly safe.

It was tremendously cold with a brutal wind chill. In fact the photograph is a Polaroid™ and the colors aren't right because the film was so cold out there! We didn't stay much past the peak of the eclipse that day. outdoor astronomy is one of the coldest things you can do. This is because you have to remain stationary through much of the “activity.”

It was interesting to see that image of the sun being partially eaten by a passing moon, sort of like a fender bender in space.

The weird light that I noticed during the last partial eclipse didn't happen this time, probably because not enough of the sun was eclipsed. The light was wan enough from being so low in the sky that things just generally had that late December afternoon look to them. So if you personally experienced this eclipse you'll just have to take my word for it about the weird lighting the last time.

The next eclipse on Isaac Newton's birthday will be on December 25, 2307. Maybe I'm just being psychic here, but I have a funny feeling that I won't be around to see that one.