Web links related to the Back of the Book program of August 11, 2008


It's Monday morning, August 18, 2008 00:54, and I've updated this Web page a little bit; I'd previously added a link to Pickles' Web page about her excursion along Park Ave. this past Saturday. Bread and circuses in one place and war and famine in another. Some world we're in just now. We plan to get to the below stuff and more on this program.

There will be a regular meeting of the WBAI LSB on Wednesday, August 13th, at 7:00 PM, at the Judson Memorial Church Assembly Room, 239 Thompson Street (just south of Washington Square Park, between W. 3rd & W. 4th St.), in Manhattan. The space is wheelchair accessible and the public is welcome to attend. Among other issues the WBAI FY09 budget will probably be discussed here, although I doubt that there will be a final version for the LSB to vote on at this meeting.

The first meeting of the WBAI LSB this month was held on Thursday, August 7th, 2008, in the Assembly Room of the Judson Memorial Church, just south of Washington Square Park.

This was a special meeting which the LSB voted to convene as a “Committee of the Whole” to discuss WBAI's FY09 budget and also the topic of violence and intimidation. The idea was that not only LSB members but anyone who attended could speak on these topics. It started out with a somewhat cluttered agenda. That got fixed. And we spent the entire evening talking about WBAI's precarious finances.

A bunch of new people were there, as well as some of the usual crowd. The new folks heard about the financial problem and some offered to help in various ways.

We never got to the violence section of the meeting because we started late and the LSB had voted to add half an hour onto the financial part. And six days after this meeting there will be a regular LSB meeting.

WBAI has an official Web stream of what's on the air at any time! You can go here and pick which type of stream you want! If this stream isn't working let me know. The stream was working at 11:16 PM last night.

So is World War III about to start?

I've been following the news of the Russian invasion of Georgia over the past couple of days and it looks pretty bad. It is being reported that as of Saturday hundreds of civilians have been killed in this conflict.

The Georgians have been saying that this is like Czechoslovakia in 1938, when Nazi Germany, and some other European countries, dismantled that country piece by piece over the course of several months. Right now it looks like the former Soviet military is poised to overrun Georgia in a few weeks.

Will this lead to a larger war? Is this the start of Cold War II? I'll have some ideas about all of this on tonight's radio program.

The Perseid meteor shower is peaking about 24 hours after this program airs. If you can catch it you should try. Of course during this program we have arranged to have clouds over our broadcast signal area so that everyone will listen to us. But you might still catch some if there are breaks in the cloud cover.

A scientist working at an installation in Hawaii has discovered some new evidence for dark energy. This work was based on the energy of photons from the Cosmic Microwave Background (CMB) radiation that pervades space and the intriguing late integrated Sachs-Wolfe Effect.

Basically, the CMB is coming from every direction and it should all have exactly the same energy. But this turns out not to be the case, as is shown by some experiments such as the Wilkinson Microwave Anisotropy Probe (WMAP). WMAP was sensitive enough to detect differences in the temperature, and therefore the energy, of the CMB of about 0.0002º K. and there were such differences detected.

When a CMB photon approaches a galactic supercluster it gets a little energy boost from the gravity in that area. Since it's an electromagnetic wave moving at the speed of light it can't go any faster, so it shows that energy as an increase in the temperature of the photon. After the CMB photon passes through the galactic supercluster it should give back that energy, cooling down to its original temperature. It's like a ball bearing on a frictionless surface rolling into a shallow depression. It gains a little bit of energy, in the case of the ball bearing this would be speed, as it goes down a gentle slope into the depression, and when it rolls up the opposite gentle slope to it's previous level it slows down by exactly the same amount as it had gained because it's giving that energy back.

What happens with the late integrated Sachs-Wolfe Effect is that the CMB photon spproaches the galactic supercluster as usual, but in the time that it takes the CMB photon to cross that area of space the expansionist effect of dark energy has put more space between the clusters that form the supercluster. This has the effect of lessening the intensity of the gravity of the supercluster. So when the CMB photon leaves that area it's leaving a less intense gravitational field than it entered, so it doesn't give back all of the energy it had gained by entering that region of space. As a result those CMB photons remain a little bit warmer than average.

How can they tell? Well, there are also big voids in the universe. These are sort of the opposite of galactic superclusters. They have a lot less matter in them and so they have a less intense gravitational field. The result is that they never get that little extra boost of energy that the CMB photons that passed through a glaactic supercluster got. By comparing the temperatures of CMB photons that have passed through galactic superclusters to those that have passed through voids scientists have found that there is a consistent difference in the temperature of the CMB depending on whether it has passed through a supercluster or a void. And this provides evidence of dark energy, and its acceleration of the expansion of the universe, independent of the other main means of detecting it through the use of analysis of type 1a supernovas.

For more on the late integrated Sachs-Wolfe Effect try this Web site.

My wild speculation may well be put to rest very soon as the Large Hadron Collider at CERN comes on line soon. 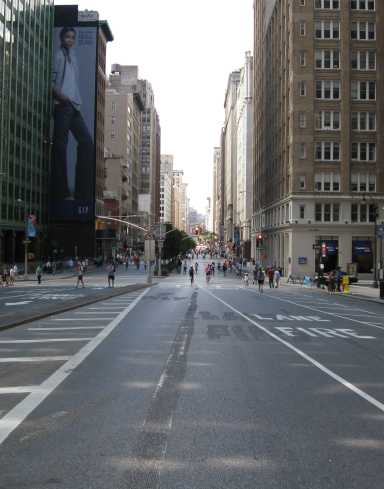 Pickles of the North reported on her going to the New York City Summer Streets event on Saturday.

This was an experiment in urban traffic adjustment where cars and trucks were banned from Park Ave. from 7:00 AM to 1:00 PM on Saturday, August 9, 2008. The vehicle-free zone extended from the Brooklyn Bridge to Central Park.

Sponsored by the New York City Department of Transportation this event was the first of its kind in New York City.

With all motor traffic banned from Park Ave., and apparently some of the side streets, for those six hours Pickles reported that the streets were pleasantly quiet and the air much more breathable than usual. In addition the temperatures were relatively cool and the buildings provided plenty of shade. Pickles really enjoyed the whole experience.

Pickles walked from the Brooklyn Bridge/City Hall stop on the IRT up to Central Park, and she wandered around in the park taking photographs for a little while. She then walked back down Park Ave. to Union Square. It was quite the excursion for her and probably for many others as well.

On the right we have one of Pickles' many photographs of the day. This one is looking south on Park Ave. from E. 33rd Street.

Pickles has posted a new Web page on her site dedicated to her experiences on August 9. There are more photographs and some commentary there.