Web links related to the Back of the Book program of November 3, 2008

It's Sunday night, November 16, 2008, 20:01 and this Web page is done. I've updated it a little bit. We did do a bunch of the mail. I've been a producer at WBAI for 27 years as of this month! We plan to get to a number of topics tonight and we also plan to get through a lot of the mail backlog.

The next regular WBAI LSB meeting will be held on Monday, November 3, 2008, at 7:00 PM, at the Judson Memorial Church Assembly Room, 239 Thompson Street (just south of Washington Square Park, between W. 3rd & W. 4th St.), in Manhattan. The space is wheelchair accessible and the public is welcome to attend.

There was a meeting of the WBAI LSB held on Wednesday, October 15th, 2008, at the Cathedral Parkway Towers Community Room, 125 W. 109th Street in Manhattan.

We learned a bit about the layoffs and other Staff cuts that are being implemented at WBAI in order to keep to the FY09 budget. Some of it's pretty bad. I think that Management needs to share much more in these cuts, instead of almost everything landing on the Paid Staff.

I delivered a truthful report on the finances, as I know them. Let's just say that this was not the sort of Treasurer's Report that has been delivered in the past. It was not rosy.

We elected three members to the new Management Evaluation Committee.

WBAI has an official Web stream of what's on the air at any time! You can go here and pick which type of stream you want! If this stream isn't working let me know. The stream was working at 10:22 PM last night.

India has launched a Moon mission, and China has orbited astronauts. America continues to do its best to kill its space program. We'll be talking about this stuff tonight.

The economy continues to be, er, interesting, so we'll talk a little bit about that tonight. 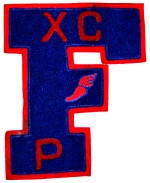 My major letter for running cross country track in my senior year in high school.

And, gosh, I guess I missed running in the New York city Marathon, which was held some hours before our program aired. Yes, I'm sure that an overweight, out of shape ex-runner would do so well, in such a thing. I'd probably throw a heart attack!

I used to run on the track teams in high school and college. I didn't do a whole Life Day thing on this program, but I did talk about cross country track and this time of year a little bit.

One of my high school track coaches used to run in marathons. What he ran in was the Boston Marathon. I think that might have been the only one back in those ancient days.

Cross country was my first introduction to track competition. I really hadn't known that such a thing existed when I joined the St. Francis Prep Track Team. The idea that we were running up and down hills, and that the race went for 1¼ miles was what I should call a surprising revelation. When I was a high school freshman and had just joined the track team, without ever having participated in a track team before, I'd thought that track meant stuff like the 100 yard dash. One and a quarter miles was an impossible sounding distance.

I really got to become familiar with Autumn weather through cross country track. I was out there running through the falling leaves and grass of Van Cortlandt Park and the rolling hills and paths among the trees of Prospect Park in Brooklyn among other places. I'm sure that as a very small child being wheeled through Prospect Park in the carriage and later the stroller I really learned the sights and smells of Autumn, but the cross country track experience is what's much more cognitively accessible when I experience Autumn now. I really remember being that young kid with a healthy body running through the grassy meadows, dusty plains and forested hills. I can smell cross country track season even now. And that's what I was talking about on the radio program.