Web links related to the Back of the Book program of November 17, 2008,


It's Sunday afternoon, November 30, 2008, 16:06, and all sorts of stuff is going on today, some of which I'll talk about on the next program. This Web page is finished now, we got to the mail and everything below plus some more on this program. Well, I've still been here for 27 years! Good grief.

There was a meeting of the WBAI LSB held on Monday, November 3, 2008, at the Judson Memorial Church Assembly Room, 239 Thompson Street in Manhattan

At this meeting we were supposed to have elected people to the Management Evaluation committee and the Programming committee. Well, the members of the so called Justice and Unity Campaign didn't want any of that to happen. So during the General Manager's Report they had one of their operatives who's not on the LSB act as if he was going to ask the General Manager a question during the time allotted for that. Instead of asking a question he launched into a diatribe about how the lawsuit that was filed to try and get the last election to be done fairly was costing WBAI money.

Actually, the plaintiffs in that case are not seeking monetary damages, they're still trying to get the election to come out fairly. What's costing WBAI loads of money has been serious mismanagement over the years and the so called Justice and Unity Campaign operatives, aka the FoBs, approving fantasy budgets for the years when they had a majority on the WBAI LSB. Now the entire Pacifica Foundation is in serious financial trouble because of all of their shenanigans.

So this guy does his diatribe, and then his time runs out. But he doesn't stop, he just keeps going on. He later admitted that he was disrupting the meeting on purpose. when he refused to stop after the Chair had told him his time was up more than once some of us started shouting at him to stop it. So at once point I shouted, “Quit taking the fucking time you asshole!”

Well, the FoBs started getting all mock outraged at this. And then they, the so called Justice and Unity Campaign operatives disrupted the meeting clucking their tongues about it. Ironically, among the posturing FoBs were Lisa V. Davis, who tried to physically intimidate another LSB member after a meeting because Ms. Davis found a question she was asking inconvenient, and Omowale Clay whom I once watched threaten physical violence against a member of the public at a LSB meeting.

Of course it was really all about the FoBs preventing the LSB from doing anything. In a few months it'll be election time again and they want to be able to say that the current LSB, where they do not have a majority, didn't get anything done just as happened when they had the majority. Ho hum, meanwhile the entire Pacifica Foundation is on a financial razor's edge.

WBAI has an official Web stream of what's on the air at any time! You can go here and pick which type of stream you want! If this stream isn't working let me know. The stream was working at 8:04 PM last night.

So I went on about this time of year, the second half of Autumn. It's depressing. The Sun sets earlier and earlier and I find that really depressing. The fact that we'd switched back to Eastern Standard Time the first weekend in November seemed to add impact to the depressing effect of the early sunsets this year. 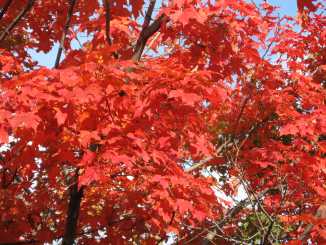 Some Autumn Foliage in Brooklyn

The midpoint of Autumn occurred on Thursday, November 6th. For even more detail on this you can look here. The Sun was setting at 4:36 PM (EST) the day this program aired. And it would continue to set earlier and earlier until December 6th, 7th and 8th, when it would set at two minutes before 4:30 in the afternoon. This phenomenon has depressed me for years.

But on December 9th, the Sun will set one minute later, and this will begin the charge towards early Summer when in late June and early July the Sun won't set until 8:31 PM (EDT).

The Winter Solstice will occur on December 21st, which will be the shortest amount of daylight of the year. Because of the tilt of the Earth in its orbit the earliest sunset and the latest sunrise do not occur on the Winter Solstice. For those who get depressed by the late sunrise relief won't occur until January 9th, when the Sun will rise at 7:19 AM (EST).

Of course this happens every year, and we just have to get through it. This seasonal depression is why there are all of these celebrations of gods and other things at this time of year. People need something to help them get through the gloomy months!

So for me the relief will start with the imperceptibly later sunset of December 9th, but it will continue from there and eventually it won't be as dark as midnight in the afternoon.

Up where Pickles of the North comes from the Sun sets even earlier, shortly after four o'clock in the afternoon. So the early sunsets of Brooklyn, New York don't bother her all that much.

I know from letters and E-mails sent in that we have a couple of listeners who've told me that they actually revel in the extra darkness. It's the bright, long days of Spring and Summer that depress them! Well, we each have our own internal landscapes.

So for the fellow sufferers of the time of so little sunlight I advise trying to get a sort of contact high off the seasonal jollity. You don't have to buy into the various superstitious stories that some celebrate, you don't have to participate in the rabid consumerism of the season, but it might help to soak in the colorful lights and the cheer that sometimes shows up at this time of year. After all, if you're going to live this far north of the Equator you'd better develop a coping strategy to deal with the extreme ends of the seasons, otherwise you're guaranteed misery. And who needs more misery?

Pickles of the North will have several space related topics to talk about tonight including the Indian Chandrayaan-1 spacecraft shooting an impactor into the Moon.

Of course we're going to talk about the actual sighting of the exoplanet Fomalhaut b by astronomers. And we'll also talk a little bit about the less mellifluously named HR8799 where an entire stellar system has been imaged for the first time.

It is in our plans to talk about this claim that someone has been actually cured of AIDS. I know that HIV is a pretty tricky retrovirus and that it will take up residence in the nerves of the body as well as destroying T-Cells. But this accomplishment does represent some progress.

The Mars Phoenix Lander has shut down due to there being insufficient light to charge its solar panels during the onset of Autumn in the northern hemisphere of Mars. Since the Phoenix Lander is actually on Mars' north polar ice cap the decrease in sunlight is drastic. Dust storms have also cut down on what little sunlight there is for the probe. Given that the probe will be subjected to surface temperatures far lower than any that occur on Earth phoenix's electronics are not expected to last through the Martian Autumn and Winter.

The probe had originally been supposed to operate for 3 months. It has lasted about 5 months.