Web links related to the Back of the Book program of December 15, 2008


Okay, it's Sunday evening, December 28, 2008, 19:07, and this Web page is done. I've updated this Web page with more about Pickles' tree and our final tally. In Iraq they're throwing shoes and here we are pitching! We hope you'll pledge tonight. I'm hoping to get even more updates done for this Web page soon.

Even though it lasted for almost five hours the last LSB meeting did not get around to setting a meeting date for the next LSB meeting. When we figure out when and where this next LSB meeting will be held, it'll be in January, I'll post the information here.

There were meetings of the WBAI Delegates' Assembly and LSB held on Wednesday, December 10, 2008, at the Judson Memorial Church Assembly Room, 239 Thompson Street in Manhattan

So this Delegates' Assembly was a continuation of the one that didn't get a quorum right before the last radio program on December 1st. This one was still short of a quorum and the time was approaching seven o'clock, when the LSB meeting was supposed to start. Also, this meeting was no longer relevant. The bylaws amendments that it had been supposed to deal with had a deadline for voting on them and this meeting was held after that deadline. So I suggested we start the meeting and adjourn it, which we did. Well, we got that out of the way.

The LSB meeting started minutes after the Delegates' Assembly adjourned and it lasted for quite a while, over 5 hours, but we got some things done.

The so called Justice and Unity Campaign operatives, aka the FoBs, had put out a call for all of their crazies to show up because I'd rightly referred to one of their disrupters as an asshole during the November 3, meeting. As it turned out most of their regular crazies didn't even show up for this meeting.

We also elected members of the new Programming Committee and actually got a few other things done. We passed motions about the loan that Pacifica is seeking to take out on the building that houses sister station KPFK in Los Angeles. Basically, we want to know that Pacifica will be able to repay this loan.

This LSB meeting didn't end until 12:19 AM Thursday morning!

WBAI has an official Web stream of what's on the air at any time! You can go here and pick which type of stream you want! If this stream isn't working let me know. The stream was working at 9:40 PM last night.

Update: We pitched a lot on this program, and it was tough getting folks to pledge. In the end we got a tally of $820. We'd like to thank each and every person who pledged to this radio program, and we'd also like to thank the folks who answered the phones and took the pledges for us while we were pitching.

Think 2008, has been a long year? Well, it's going to get longer! They'll be adding a leap second to this leap year on December 31st.

Scientists have used the best precision infra-red telescopes to look at the center of the Milky Way galaxy, where we all live, and after 16 years of this study they now know a lot more about it.

They have established that the Solar System is about 27,000 light years away from the center of our galaxy and that the black hole there weighs about as much as 4 million Suns.

Pickles of the North read some excerpts from the Gospel of Mary Magdalen, the Secret Gospel of Mark and the Infancy Gospel of Thomas. Wow, is she getting all religious on us? Nah, she read us tales of a female Apostle and of a 4 year old Jesus H. Christ who killed his playmates when they pissed him off. It reminded me of an old Twilight Zone episode.

The Winter Solstice will occur on Sunday, December 21st, 2008, at 7:04 AM (ET). Pickles of the North and I will be celebrating it, how about you? For more about the seasons and sub-seasons look here. 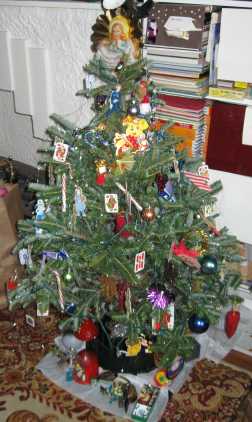 On the last radio program we talked about Pickles of the North getting ripped off when she bought a tree. Call it a Christmas tree, a Chanukah bush, or an Isaac Newton's Birthday fir she got ripped off on it.

Well, Pickles had started to put decorations on the tree and after she'd had it for about a week she noticed that some of the branches were not looking at all well. She peered into the tree and discovered that even more branches than we'd know about had been tied onto the trunk of the tree with the same green string!

There were chunks out of the tree in various places and Pickles was not at all pleased.

Here are the gory details of the voids in that tree.