Web links related to the Back of the Book program of February 9, 2009


It's Sunday afternoon, February 15, 2009, 17:58, and this page is finished, I've updated this Web page with the audio of the short clip I played on the air of the Pacifica Auditor's comments and I've added some more about our Coney Island excursion in the days before this program. I'd previously added the location of the next LSB meeting and the tally total. Oh, we need some economic stimulus, all right! We're pitching on this program, but we're going to try it in a different way to see if we can make it less awful for the listeners. Please pledge to the program tonight.

There were meetings of the WBAI Delegates' Assembly and LSB held on Wednesday, January 21, 2009, at the Judson Memorial Church Assembly Room, 239 Thompson Street in Manhattan

The LSB voted to hold the rest of its meetings for 2009, on the following dates:

I had all of the faction members sitting next to me during this meeting. They just never shut up! They chatter on all throughout the meeting and make nasty, insulting remarks to and about others. And they just keep this up. I suppose that they're bolstering each others' delusions.

The LSB passed a motion reconstituting the LSB Radio show committee and asking the Program Director and General Manager for air time for it on a monthly basis. There was only one LSB radio show in 2008, far fewer than when the Program Director's faction had the majority on the LSB.

I gave a Treasurer's report. The news is not so great. And we are not sure about what's happening with WBAI's FY09 budget because I'm not getting the information from the Pacifica National Office.

The General Manager wasn't there but he sent along a written report. He talked about the premiums being dealt with. I've also heard from others that folks are coming in to volunteer their labor to get the backlog of premiums out at long last. If you haven't gotten a premium you should contact WBAI Management about this and see if you can get the long delayed premium now.

The Delegates' Assembly elected the following members to the Pacifica National board: Nia Bediako, Carolyn Birden, Kathy Davis and Jamie Ross. These are the same folks elected last April when the FoBs lost the majority on the WBAI LSB.

And this LSB meeting was over before ten o'clock at night! A definite improvement over the last one that went on into the next morning.

WBAI has an official Web stream of what's on the air at any time! You can go here and pick which type of stream you want! If this stream isn't working let me know. The stream was working at 10:12 PM last night.

Update: Well, this wasn't as successful a fund raising program as we'd hoped. We did raise $720, and we're hoping that we'll do decently for the next radio program when we have to pitch again.

We've been informed that we'll be pitching on the next program on February 22/23! Well, WBAI needs to pay the rent. And with changes on the PNB and in Pacifica Management things may be looking up.

We hope that you'll pledge to WBAI while Back of the Book is on at that time.

If you listen to the radio program on tape or via the archives you probably won't be able to pledge during the program, but you can send us a check ahead of time. A regular one year membership is $25. So, if you can, please send a check made payable to “Pacifica/WBAI” and send it to:

We are only a few months from the start of the next WBAI LSB election process. I hope that all of you will join WBAI as members and be not only eligible vote in those elections but be able to run as candidates for the LSB. And I hope that none of you votes for any of the crumb bums who will run on the so called “Justice & Unity” slate.

The Pacifica National Board (PNB) met last weekend. There were some dire financial reports, but there was some hope. There is a new Chair of the PNB, she has issued a statement to everyone in Pacifica. She is also the interim Executive Director. Pacifica also has a new interim CFO. Things may start to improve now.

We spoke about this PNB meeting a bit on the air. There was an Auditor's Report at that PNB meeting. It was delivered by a Mr. Tony Paul who is the Auditor of the Pacifica Foundation, which owns WBAI. I played a very short excerpt of his remarks to the PNB. It's 91 seconds long and it consists of four of Mr. Paul's statements. Each statement is separated from the others by a short “beep” sound. The four statements themselves are presented unedited.  Pacifica Auditor's comments 1:31 — download the mp3 file

On our previous program we talked about the tragic scene that was playing out at Coney Island. We talked a little bit more about that on this program, and also about our walk there soon after a snowstorm. 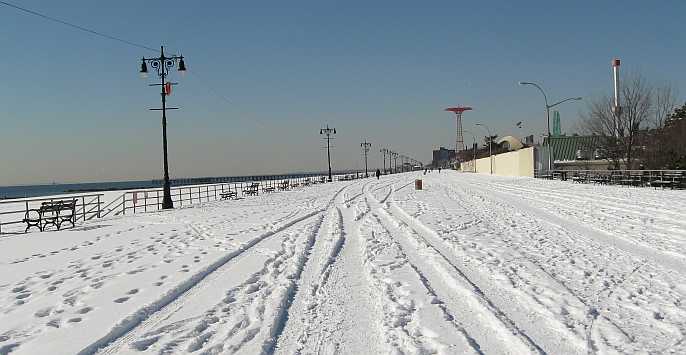 The snow covered Boardwalk at Coney Island was criss crossed by tire marks, probably from cop cars and Parks Dept. vehicles which use the Boardwalk as a highway even at the height of the Summer season when it's crowded with thousands of people. The Boardwalk was never built to withstand that much vehicular traffic.

To the left of the fence can be seen the snow covered beach, beyond that the dark waters of New York Harbor. In the distance are the iconic red structure of the Parachute Jump and the green Wonder Wheel in its winter configuration without cars on it. To the right is the white Astroland Tower, the fate of which is now uncertain since Astroland no longer exists.

While the Parachute Jump, Wonder Wheel and the Cyclone, which is not visible in this photograph, are landmarked the Astroland Tower is not. What will happen to the Astroland Tower is not known yet. Does anyone even have any plans for it? Will the “developers” just demolish it? Will it survive the current crisis and go on to become landmarked and as iconic of Coney Island as the other rides? Nobody knows yet but it's facing perilous times right now, as is the rest of Coney Island.

Oh, we're going to talk about that place that's been putting out the tainted peanut butter. We'll also talk about the dry roasted rat that inspectors found there.