Web links related to the Back of the Book program of April 6, 2009


It's Sunday night, April 19, 2009 21:10, and this Web page is finished. I've updated this Web page with more about what we did on the program and the sudden postponement of the next LSB meeting. Well, WBAI is in some turmoil again. And we had to leave very early this time because there's track work being done on the IRT and we didn't want to be late.

The next regular WBAI LSB meeting has been postponed because the elevator at the planned venue has broken and the place is not handicapped accessible, as required by Pacifica. When I find out where and when the next meeting is I'll post that information here.

We wrangled about the agenda, and we then went on to have a decent, productive meeting.

The General Manager gave more than one report, much of it written, and those of us on the National Finance Committee drove home the fact that WBAI and Pacifica are in very serious financial straits.

We created a working group to set up the LSB's next mandated Town Hall meeting. and we got comprehensive reports from the new Programming Committee. Unfortunately, the news they brought is not good.

The meeting went on for quite a long time. Faction operatives objected, but the long meeting allowed us to get things done. The faction isn't pleased when the LSB gets things done.

The LSB has voted to hold the rest of its meetings for 2009, on the following dates:

WBAI has an official Web stream of what's on the air at any time! You can go here and pick which type of stream you want! If this stream isn't working let me know. The stream was working at 9:29 PM last night.

On the last program we talked about Pickles of the North having shingles of the eye. We've had two more weeks of eye drops and clinic visits since then, and we'll tell you about that.

Well, WBAI is involved in some turmoil again. This past week WBAI General Manager Anthony Riddle posted a memo addressed to the interim Executive Director of the Pacifica Foundation to the Staff Notices list. He was complaining about not having been told that the interim Executive Director was having the locks changed on WBAI's transmitter room at the Empire State Building.

This seems to have gotten some people into a panic. For the next two days Wake Up Call had some people on it losing control of themselves and attacking all sorts of people who are not a part of the Program Director's FoB faction. Some of those named didn't even know about the lock changes.

Grace Aaron, Pacifica's interim Executive Director, issued a public statement about what was going on. She later released a set of answers to Mr. Riddle's original memo.

Ms. Aaron will be coming in to WBAI this week to try to do something to save the station and Pacifica from disaster. The FoBs are already screaming about this and calling for picket lines and “resistance” to her attempts to get WBAI out of the financial death spiral that it's currently in.

A lot of the FoB faction folks are just in denial about the reality of the situation. They had until recently been claiming that there was no financial crisis. And now they have nothing to offer regarding a way out of this mess they've gotten us into.

A couple of facts illustrate the problem. WBAI had not paid its rent on the 120 Wall St. space for four months. That bill now stands at $128,072. WBAI is also behind on the rent for the transmitter room at the Empire State Building. That bill now stands at $77,671. So on the rent alone WBAI is facing bills of $205,743. At the end of March WBAI had about $45,000 cash in the bank with which to pay all of its bills.

I think that states the problem pretty succinctly.

I don't know what Ms. Aaron is going to do this coming week. I do hope that she is successful in saving WBAI and Pacifica from insolvency and bankruptcy. If she isn't, we're probably gone in the not very distant future.

UPDATE: WBAI General Manager Anthony Riddle has issued this timeline of the events of April 1 & 2, 2009.

We talked a bit about researchers finding a gamma ray burst that had been polarized by an intense magnetic field. This tells the scientists a bit more than they'd previously known about supernovae. The gamma ray burst that gave them this insight was among the brightest 1% to have been observed. On the air we digressed into a short history of extraterrestrial gamma ray detection and related sub topics.

Well, we've seen movies about them coming from outer space, but when we finally find them they're in a Texas cow pasture and a fish tank.

I'm talking about giant amoebas and huge colonies of what are called social amoebas that are all clones of one another.

Scientists found billions of these social amoebas in a Texas cow pasture. The things are clones of each other, which makes sense given how amoebas reproduce. Their behavior is interesting too in that some of the individuals give up their existence so that the colony may live and reproduce.

We also talked about observed cases, including one that happened in a scientist's fish tank, where these sorts of amoebas come together to form a one huge, by microbial standards, amoeba with millions of cell nuclei in it. Wow, that must be a complicated chemical environment. Here's an article with a photograph of one of these super amoebas.

We have always thought of large organisms as needing to be multicellular. But here we have an example of how a relatively large creature can form by an alternative method. Well, life has all sorts of surprises for us when we look closely enough. 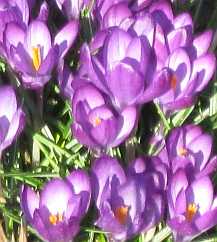 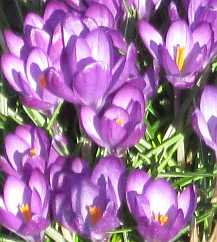 Spring is here, all right! The crocuses are blossoming and even though we've got some cold weather showing up between the milder days the trend is still towards warmer weather.

The days are longer than the nights and I am so glad that sunset is after 7:00 PM now.

Pickles of the North is insisting that I get my ass out of the house more this Spring. Yeah, she's right. I need to get a bunch of walking exercise in. My health is not enhanced by my sitting in front of a computer screen for so many hours a day.

Soon we'll be getting to the Middle Third, the months of May, June, July and August. That's my favorite time of the year. It's warm and there's plenty of sunlight, most years. But the anticipatory nice days of April can be good too. They get me out of the scarfed and gloved regime of Winter and I can trade my Winter coat for a jacket, and then for a lighter jacket. And I know that soon it'll be shirtsleeve weather.

This April the nights can be nice too. They're generally warming up, although just now we've still got some cold ones. This year April will have the planet Saturn high in the sky all night long. If you have binoculars or a telescope take a look at the ringed planet. The rings are almost edge-on but you can see enough of them to be impressed, especially if you've never looked at them this way before.

The Brooklyn Botanic Garden is free on Tuesdays. All sorts of flowers are in bloom throughout the Spring, so Pickles of the North and I plan to go there a bit. If you can get there, or to a similar place with flowers and growing things, take a shot and enjoy the Spring of '09.

Probably the most popular list that's sprung up is the “NewPacifica” mailing list. This one is very lively and currently includes over 650 subscribers coast to coast.