Web links related to the Back of the Book program of October 19, 2009


It's Sunday night, November 1, 2009, 21:13, and this Web page is done. I've updated this Web page with more about what we talked about on the air, I'd previously posted the news that the LSB election has been extended to November 15th! I've got a link to the full explanation of why this is happening below. There may be more updates to come. ⇒ Well, we're not going to go anywhere in a balloon on this program, but we are going to ask you to pledge some money to WBAI. Raising money needs to be the primary goal for tonight's program, but we're going to do as much regular radio program as possible too. So there's no telling for certain just what we'll get to tonight, so check back in over the next little while to see the inevitable updates.

Did you know that I've got a brief synopsis of many of the WBAI LSB meetings? Well, I do, and I've recently updated this stuff a tiny bit.

The next regular WBAI LSB meeting is scheduled to be held on Wednesday, November 11, 2009, at 7:00 PM, at a location to be announced.

There was a regular meeting of the WBAI LSB held on Wednesday, October 14, 2009, at 7:00 PM, at the Judson Memorial Church Assembly Room, 239 Thompson Street (just south of Washington Square Park, between W. 3rd & W. 4th St.), in Manhattan.

Some of the FoBs came out for this meeting and disrupted it a bit, but the LSB persevered and we got some business done.

The LSB voted for the members of the Management Search Committee, and the votes will be tabulated at some point soon. The faction doesn't want new Management, of course, they want their old pal who was destroying WBAI to finish the job.

The 2009, WBAI LSB elections are under way at Pacifica. This meeting was another example of the FoBs trying to regain a majority on the LSB and the PNB in an effort to reinstall their faction boss and turn back the clock for WBAI and Pacifica, which would of course result in the destruction of both, which may be exactly their goal.

WBAI has an official Web stream of what's on the air at any time! You can go here and pick which type of stream you want! If this stream isn't working let me know. The stream was working at 10:26 PM last night.

The 2009 Local Station Board Elections Have Begun!

If you have not gotten your ballot yet you need to contact the Local Elections Supervisor, Ethan Young, about that immediately! You can call him at 212-209-2828, and you should definitely E-mail him at election@wbai.org.

This election is crucial for the survival of WBAI and Pacifica. WBAI and Pacifica are in a precarious position right now as current Management attempts to reverse the death spiral that the station and the network have been in for years. If some bunch of chuckleheads gets a majority on the WBAI LSB they'll be able to change the composition of the Pacifica National Board and revert to corrupt, incompetent and malfeasant Management, they might even sell WBAI.

The official Web page containing the list of candidates and their statements is here. You'll have to scroll down the list to find the WBAI candidates.

There's an election going on in Pacifica, so there were a few candidates attending and speaking during the public comment sessions. Some disrupted the meeting.

And the PNB has also met in Houston from Friday October 9th, through Sunday October 11th. The official audio archive of that meeting is here. It was not disrupted as the New York meeting was, although some of the same miscreants got out there to say stupid things. I may do more about this meeting on a future program or elsewhere on this Web site.

It should be noted that many of the overnight programs are preempted for this 'thon. Back of the Book is on tonight because we did well raising money during the Spring and Summer 'thons. If you'd like to see this program continue please pledge tonight.

UPDATE: We raised $870 on this program. Thanks to all who contributed and thanks to the folks in tally who took the calls.

We plan to talk about the new attempt to find out more detail regarding the expansion of the universe and dark matter tonight. 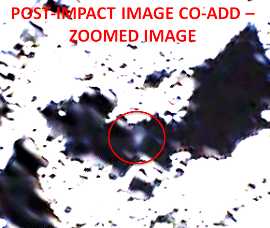 Pickles of the North and I watched NASA's Lunar CRater Observation and Sensing Satellite (LCROSS) smash into the crater Cabeus near the Moon's south pole this past fortnight. The LCROSS satellite had been preceded four minutes earlier by the Centaur impactor, which was just the top stage of the Atlas V rocket that had launched it all into space.

The goal of the first impact was to stir up a plume of whatever's hidden in that crater and then have LCROSS cruise through that ejecta taking lots of instrument readings and photographs to determine exactly what that Centaur impactor had hit.

We didn't see the expected plume of water vapor come shooting up from the initial impact, but we were assured that instruments did detect something.

And on the left you can see an enhanced photograph taken by the LCROSS instruments about 15 seconds after the Centaur impactor had slammed into the dark part of Cabeus crater. The plume is about 4½ miles in diameter at this point.

In the live, visible light feed we didn't see a thing. But the various instruments on board LCROSS picked up a lot of data, including the photograph with the plume. The plume itself was very faint as you can tell from the amount of over exposure in the photograph needed to show it. Without the over exposure that whole area is the usual dark gray to black landscape of the Moon.

Here's a reason why there may be some water on the Moon. Wow, the stuff you have to take into consideration when you're not dealing with ordinary, terrestrial objects.

We talked about the hoax from this past week about the kid named Falcon Heene, who will now be known for the rest of his life as “Balloon Boy,” who was not in that stupid balloon. His father's claim that he's trying to invent something for people to commute in is make believe too. The father, Richard Heene, was just trying to get personal publicity. The commuting balloon he claimed to have been experimenting with was just a prop, as his son also turned out to be.