Web links related to the Back of the Book program of March 5, 2011


It's Sunday evening, March 4, 2012, 18:43, and this Web page is finished. I've updated this Web page with the piece about our trip to Coney Island a couple of days before this program, and I've also put up a separate page about that trip. Previously I'd put in a link to the video of what we did after the last program. More to come, and pretty soon, I hope. The original top of this page follows the arrow. ⇒ Wow, we're all crammed up here tonight. We plan to get to the below topics and more on this program. I'm sorry that I haven't been updating the Web pages for these radio programs of late. I plan to rectify that over this next fortnight.

The next regular WBAI LSB meeting will be held on Wednesday, March 9, 2011, at 388 Atlantic Ave. between Bond & Hoyt Sts., in Brooklyn. This meeting will be on the ground floor.

The regular LSB meeting scheduled for Wednesday, February 9, 2011, was not totally insane. We elected the officers and put people on PNB committees. While the faction operatives has various comments to make they never mentioned their phony LSB meeting that they held after the real LSB meeting broke up in December. Maybe they actually embarrassed themselves.

Here are the Officers elected for 2011

WBAI has an official Web stream of what's on the air at any time! You can go here and pick which type of stream you want! If this stream isn't working let me know. And you can see the status of the streams at any time by clicking here. The stream was working at 1:58 this morning. The station has a Flash stream here, make sure you enable Javascript so it can work for you.

If you want to listen to any part of the WBAI archive click here to go right to the archives. When you first go to the Web page you'll only see the WBAI programs for the past 7 days. If you want to see older programs you can click on one of the “See ALL Shows” buttons. Or to see only the two shows in this time slot click here. The archives of our programs in our previous time slot are here.

In the table on the archive Web page Back of the Book and Carrier Wave are both in the “Show” column. The “Date and Category” column shows the date of the program. After the program I go in and write the details of the program and say which program it is. Of course I'd recommend that you just listen to both programs in this time slot!

Back of the Book has been moved to this time slot. We'll see how this move works.

The interim Program Director has issued notice of program changes. The evolving, relevant documents are below. We are hearing from other producers who have been told they are being moved to other time slots and having their time cut in half. One producer has been told he's off the air entirely and another producer has decided that he would rather resign than be treated in a way that he can't abide.

Some producers are lobbying heavily to retain their current time slots, and some have lobbied to get better time slots amid the chaos of this sudden program shakeup. One producer got moved, accepted it, and then got pushed out of the new time slot by another producer who had publicly quit and then successfully lobbied the interim Program Director, with the aid of four supporters, for a better time slot. The producer who got pushed out has quit WBAI.

We got a call on our answering machine from WBAI interim Program Director Tony Bates at 5:17 in the afternoon on November 1st. He said that the grid was changing and that Back of the Book would be affected. When I called back at 7:15 that evening I got his voice mail and the voice mail was full so I couldn't leave a message.

I called the interim Program Director about this again the next day. He told me that he was moving Back of the Book to 5:00 AM on Saturdays! And in this new time slot the program is only one hour long. Let's just say that we are not jumping for joy about this change in the program. It's quite a change for us, and for our listeners. And, yes, Uncle Sidney has moved his program Carrier Wave, or whatever he's calling it lately, to this same time slot and will continue alternating with us.

Here are the latest documents from Management about the programming shakeup:

In the grid I do not know whose picture that is to the right of the data. Even now I don't know that these program changes are fully settled.

Of course I've had something to say about all of this. I sent this out as an E-mail on November 11th. If we don't get more listeners soon WBAI will cease to exist.

The Vernal Equinox will occur on Sunday, March 20, 2011, at 7:21 PM (ET), the day after our next radio program. Oh, I am so looking forward to Spring. Click here to see the Seasons and sub-seasons for the near future, and past.

Some astronomers in Hawaii have set a record. It's a record for the most near Earth asteroids (NEAs) discovered in one night.

Setting a record is nice, but when you think about the fact that it means that there's even more stuff whirling around in the space hear the Earth than had been known about before it gives you pause.

This was long overdue. This sort of nonsense was used to harass Phil Zimmerman, inventor of the Pretty Good Privacy software, for years. And all of that software has been publicly available, internationally, for all of that time. The entire announcement is here. 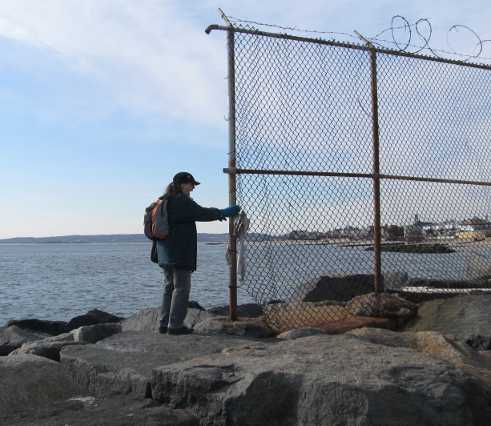 Pickles of the North Defies the Gated Community

So on March 1st, Pickles of the North and I went to Coney Island. Here you can see Pickles shouting at the gated community called Sea Gate, on the other side of the chain link fence that extends along the jetty out into New York Harbor.

You can see some of the buildings and the private beach in Sea Gate through that rusting chain link fence. Sea Gate, besides being a gated enclave, is also being worn away by the action of the waters of the Lower New York Bay. Some homes that used to be on the extreme western end of it have fallen into the harbor over the years.

I've put up a separate Web page about our little excursion that day.

After the last program we went to Battery Park. It was cold, again, and it was windy. The waters of New York Harbor were really choppy.

On the left is a video I took of the choppy water. And then I got a shot of the Staten Island Ferry making its way through the rough water to its berth.

Yeah, it's not exactly a great video, but it does give an idea of how choppy that water was and how windy the conditions were.