Web links related to the Back of the Book program of April 2, 2011


All right, it's Friday afternoon, June 8, 2012, 14:29, and this Web page is finished at long last. I've added some things, mostly about our intrepid expedition to the Brooklyn Botanic Garden in the days before this radio program. I had to go through a lot of photographs to put the page about that expedition together. I'll be updating that page over time. The original top of this page follows the arrow. ⇒ Oh, Spring is here! Of course it's full of snow and cold and gloomy days so far, but this weather can't last forever, can it? Can it? We plan to get to the below topics and more on this program. Pickles of the North is back from her trip and she'll talk about that as well as doing a book review.

WBAI has an official Web stream of what's on the air at any time! You can go here and pick which type of stream you want! If this stream isn't working let me know. And you can see the status of the streams at any time by clicking here. The stream was working at 2:35 this morning. The station has a Flash stream here, make sure you enable Javascript so it can work for you.

Back of the Book has been moved to this time slot. We'll see how this move works.

The interim Program Director has issued notice of program changes. The evolving, relevant documents are below. We are hearing from other producers who have been told they are being moved to other time slots and having their time cut in half. One producer has been told he's off the air entirely and another producer has decided that he would rather resign than be treated in a way that he can't abide.

Some producers are lobbying heavily to retain their current time slots, and some have lobbied to get better time slots amid the chaos of this sudden program shakeup. One producer got moved, accepted it, and then got pushed out of the new time slot by another producer who had publicly quit and then successfully lobbied the interim Program Director, with the aid of four supporters, for a better time slot. The producer who got pushed out has quit WBAI.

We got a call on our answering machine from WBAI interim Program Director Tony Bates at 5:17 in the afternoon on November 1st. He said that the grid was changing and that Back of the Book would be affected. When I called back at 7:15 that evening I got his voice mail and the voice mail was full so I couldn't leave a message.

I called the interim Program Director about this again the next day. He told me that he was moving Back of the Book to 5:00 AM on Saturdays! And in this new time slot the program is only one hour long. Let's just say that we are not jumping for joy about this change in the program. It's quite a change for us, and for our listeners. And, yes, Uncle Sidney has moved his program Carrier Wave, or whatever he's calling it lately, to this same time slot and will continue alternating with us.

Here are the latest documents from Management about the programming shakeup:

In the grid I do not know whose picture that is to the right of the data. Even now I don't know that these program changes are fully settled.

Of course I've had something to say about all of this. I sent this out as an E-mail on November 11th. If we don't get more listeners soon WBAI will cease to exist.

If you want to get a good look at the planet Saturn, now's the time!

We played the traditional Here Comes the Sun by The Beatles on this program to welcome Spring. Yeah, we have more daylight than nightdark now. And I like it that way. 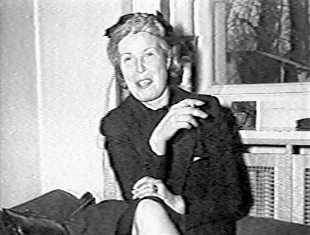 On this program Pickles of the North reviewed the book Axis Sally, The American Voice of Nazi Germany by Richard Lucas. We also featured some short clips of what Axis Sally did during World War II. 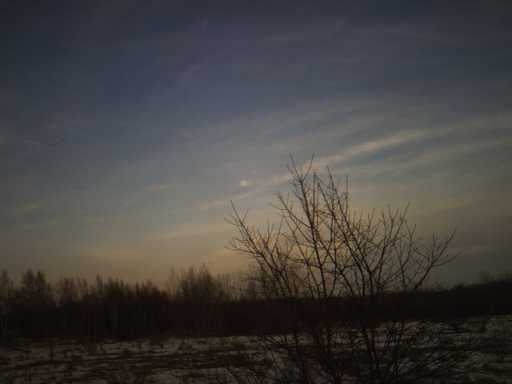 Pickles of the North's View on the Way North

Pickles of the North talked about her adventures going north a fortnight ago. She took time out from protesting that oppressor Santa Claus to visit her parents and other relatives while she was up there. 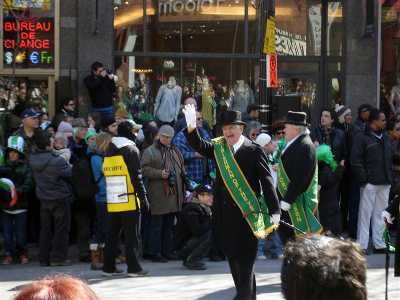 Pickles' father marched as an honored guest in the annual St. Patrick's Day Parade up by the North Pole. In one of the previous marches he was “Irishman of the Year” so they have a special place for him in the march every year now. Here he is waving to the crowd. 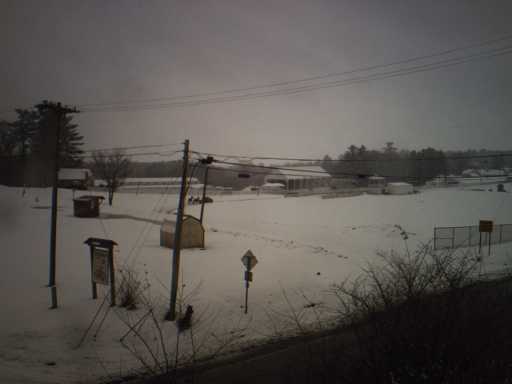 The First Day of Spring

Yeah, Pickles was on the train heading home at the exact minute when the Vernal Equinox occurred and Spring began. Here you can see how bright and cheerful it is up north at this time of year. And you can see why I prefer not to live up there!

We talked about the dangers from that Fukushima Daiichi nuclear reactor that got flooded out and melted down in Japan.

I think a lot of people owe a great deal to the guys who are staying on the job trying to keep that thing from getting worse. Brave people. 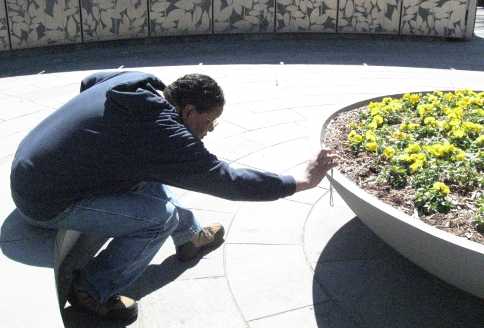 Uncle Sidney Getting a Good Shot of Yellow Pansies

Here you can see Uncle Sidney just outside the Brooklyn Botanic Garden getting one of his first photographs of the day. This large pot of little flowers is labeled “Pansy ‘Delta Pure Yellow.’”

So we really wandered around the entire place for about six hours, including lunch time in their tiny cafeteria in the basement of the main building. We saw lots of new, Spring growth just starting to come up, and we got some shots of each other too.

There are so many photographs from that day that I've decided to make a separate Web page for them. Click here for the fully illustrated story of this expedition we three took that day.