Web links related to the Back of the Book program of August 20, 2011


It's Saturday morning, August 27, 2011, 02:25, and I've updated this Web page with the news about what's ahppening with WBAI during the Hurricane Irene emergency. The original top of this page follows the arrow. ⇒ At the end of this program Back of the Book will have completed 25 years on the air. We're hoping to celebrate on the next program. Pickles of the North is at the North Pole this fortnight fighting that oppressor Santa Claus. She'll be back for the next program. We plan to get to the below stuff and more on this program. Check back for updates.

On Friday afternoon Staff got notice from the new Ops Director regarding what's going to happen with WBAI during the Hurricane Irene emergency.

WBAI is in the Zone A evacuation area and everyone has to leave the 120 Wall St. location as of 5:00 PM Saturday.

The next regular WBAI LSB meeting will be held on Wednesday, August 10, 2011, at a location to be announced.

WBAI has an official Web stream of what's on the air at any time! You can go here and pick which type of stream you want! If this stream isn't working let me know. And you can see the status of the streams at any time by clicking here. The stream was working at 3:07 this morning. The station has a Flash stream here, make sure you enable Javascript so it can work for you.

I plan to talk about this so-called “Protecting Children from Internet Pornographers Act of 2011” on this program. It's really an intrusive piece of legislation that's about letting Big Brother have his Patriot Act powers under cover of protecting children. I always knew that they'd use something like this to try to eradicate civil liberties on the Internet.

Here's a statement from Judiciary Committee Chairman Lamar Smith about why this is just such a good bill.

There are those who see this for what it really is. Here's a letter from some organizations that are against it.

Has the LHC detected the Higgs boson? 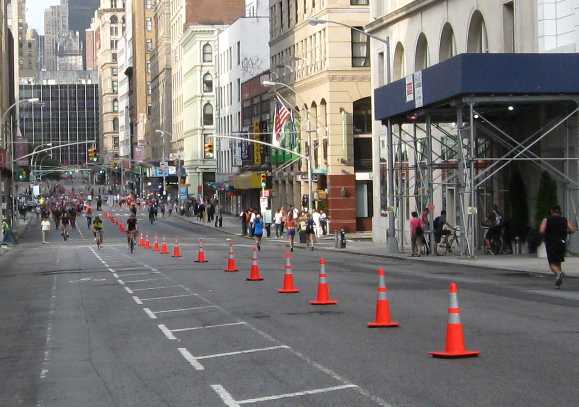 The View South on Lafayette Street

After the last radio program Pickles of the North and I went to the city's Summer Streets event. This is where they close off Park Ave. to vehicular traffic for several miles and pedestrians are supposed to be able to walk freely along the fancy boulevard.

Well, you still have to watch out for idiots on bicycles who think that closing off the street to motor vehicles gives them license to speed along at high speeds amid people walking and jogging along the same street.

The southern end of the event is at Foley Square. You can walk up Lafayette St., which becomes 4th Ave for a short while and then that becomes Park Ave.

We only went up to E. 24th St. this year. We'd been up all night getting the radio program ready and one of us, yeah the old guy, was just too pooped to keep going.

At E. 24th St. Pickles got to get some seeds from the New York Botanical Gardens folks who were there, as well as try out some health food stuff.