Web links related to the Back of the Book program of October 15, 2011


Tonight's program will be a pitching program. It will be the only program we'll be doing during this Fall 'thon. We really need to do decently tonight. We hope many of you will pledge. We can't tell ahead of time just how much of the stuff we're preparing for this program will end up getting on the air. The more we have to pitch the less radio we can do. And if we don't raise enough we'll have to pitch a bunch more. I'll try to get this page updated soon.

The next regular WBAI LSB meeting will be held on Wednesday, November 9, 2011, at a location to be announced.

The LSB met on Wednesday, October 12, 2011, at the New York City Lesbian/Gay/Bisexual/Transgendered Center at 208 W. 13th St., between 7th and 8th Aves. in Manhattan. The meeting got dominated by posturing and a motion that while it had some points to it was ill-considered.

WBAI has an official Web stream of what's on the air at any time! You can go here and pick which type of stream you want! If this stream isn't working let me know. And you can see the status of the streams at any time by clicking here. The stream was working at 1:35 this morning. The station has a Flash stream here, make sure you enable Javascript so it can work for you.

Update: we raised $305 in pledges and checks from listeners on this program, and we raised an additional $30 from a single Web donation, for a grand total of $335. Thanks to all who pledged.

We are hoping to talk about various scientific things ranging from dark matter to really ancient painters on this program. 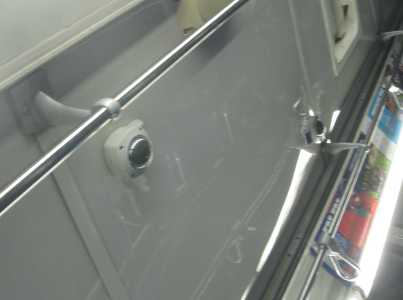 We're hoping to get to a topic about the increased spying that the government is going to be engaging in over the next few years, and probably on into the remainder of the 21st Century.

A couple of weeks ago Pickles and I were on the bus and we noticed that the bus had spy cameras, plural, on it to observe the passengers. I'm sure that some people will welcome being watched by the police, FBI, CIA, NSA, Republicans, etc. Pickles and I find it disturbing that we're being watched all the time. And of course everything is being recorded now, too.

What would George Washington, Thomas Paine, Thomas Jefferson and Benjamin Franklin have thought of this development? 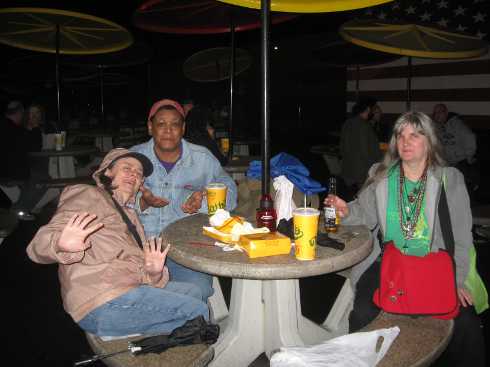 Pickles of the North, Uncle Sidney and Ratgirl of the West at Coney Island

After the last program Pickles and I had to rush home so we could get some sleep. We had an early evening date to meet Uncle Sidney and Maxwell J. Schmid as they rode the new slingshot ride at Coney Island.

Unfortunately, there was a torrential downpour and the ride's operators shut the ride down. And Maxwell had to stay home to work on things.

But the rest of us were there, in the picnic space just west of Nathan's, and we had a repast. I think this was my breakfast that day. The hot dogs and Diet Coke in the foreground were mine.

Soon after this photograph was taken Uncle Sidney had to leave to go to work at WBAI. Pickles, Ratgirl and I went up on the Boardwalk and looked around. I took some more photographs that didn't come out well in the dark.

Oh, this was an unusual start for a fortnight. I'm usually pretty groggy around the time of the beginning of a fortnight. And this was no different in that regard. Luckily we didn't get rained on too much.