Web links related to the Back of the Book program of November 26, 2011


It's Thursday, December 1, 2011, 09:07, and I've updated this page with the information about the next WBAI LSB meeting. More updates to come. The original top of this page follows the arrow. ⇒ We plan to get to the below topics and more on this program. We'll talk about some science topics and we also plan to get through some of the listener mail that some of you folks have sent in. Check back for updates over the next, I don't know, long period of time.

The LSB met on Wednesday, October 12, 2011, at the New York City Lesbian/Gay/Bisexual/Transgendered Center at 208 W. 13th St., between 7th and 8th Aves. in Manhattan. The meeting got dominated by posturing and a motion that while it had some points to it was ill-considered.

WBAI has an official Web stream of what's on the air at any time! You can go here and pick which type of stream you want! If this stream isn't working let me know. And you can see the status of the streams at any time by clicking here. The stream was working at 2:47 this morning. The station has a Flash stream here, make sure you enable Javascript so it can work for you. 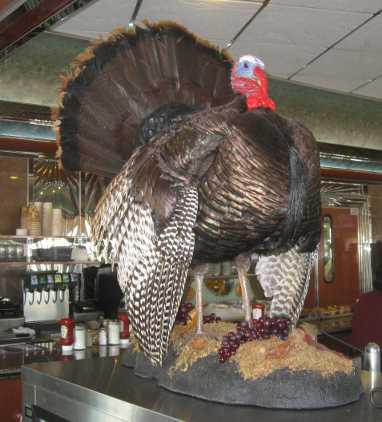 A Different Kind of Stuffed Turkey

And a merry Thanksgiving to everyone who celebrates the holiday!

On the left is a stuffed turkey of a different sort from what most people experienced this past Thursday. It was a display in a diner in Nassau County where Pickles of the North and I visited a couple of my cousins last week. The folks who run the diner were trying to entice customers to eat their Thanksgiving meal there as opposed to cooking at home. I'm sure that any number of people took them up on that offer, although I'm not sure that the stuffed turkey played a role in anyone's decision. My cousins told us that they were just going to get some take-out Chinese food for Thanksgiving.

Over at Castle Martin we had a Thanksgiving dinner with the Saddle pals and the Saddle Gals.

Pickles of the North invited folks over and got a whole bunch of food in. She did a little redecorating and she cooked a turkey breast and some vegetables. I passed on most of the vegetables, of course. I had the turkey and a tiny bit of potato.

Uncle Sidney Smith came over in the afternoon and later on Maxwell J, Schmid and Ratgirl of the West, aka Mr. & Mrs. Satan, came over with some gluten free lasagna which I was told was really great.

We sort of ate in shifts. Pickles, Uncle Sidney and I crowded in around our kitchen table to eat and then when Pickles and Uncle Sidney were just about done eating Mr. & Mrs. Satan showed up. Being a slow eater I just kept on slowly eating while the second shift sat down for their meal. 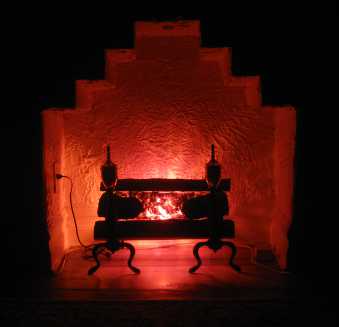 Uncle Sidney and I then retired to the living room where you can see our fabulous yule log that was blazing away in there. All right, it's an electric fire, with an orange light bulb and a motor turning a plastic drum that makes it look a tiny bit like a real fire's going. You can see where it's plugged in.

This thing was in the apartment when I arrived almost 40 years ago. Somewhere on it there's a date stamp from some time in 1971. We figure that was the date of manufacture, although my grandmother had one of these electric fire things in her apartment back in the '40s. The electric motor is probably on its last legs, it's making a hell of a lot of noise.

But after everyone had eaten we all were in the living room enjoying the orangy light and the sound of old electric motor gears grinding away. And we variously talked and passed out in the semi-dark and a good time was had by all.

We hope that you had a good whatever the hell you'd like to celebrate this past Thursday, and if you didn't celebrate anything special at all then at least it was another day above ground.

We plan to talk about the latest Mars Rover named Curiosity. This is a very large rover, about the size of a car, that will be explicitly looking for evidence of past life on the planet Mars.

NASA plans to launch Curiosity, the largest object that humans have ever sent to another planet, at 10:02 AM today. NASA has posted a Web page about it that you can use to follow the countdown and launch.