It's Friday night, February 3, 2012, 22:13 and I've updated this Web page slightly with a bit about the Master Control clock being restored. Sounds like a small thing, but when you're on the air live it's important to be able to see what time it is. The original top of this page follows the arrow. ⇒ This is our first program of the new year, and you'll notice that we have a slightly different top of the page now. This reflects how things have changed regarding how people use the Web and how these Web pages relate to the radio program. We plan to get to the below stuff and to do some of the mail on this program. There will be updates. Check back for those.

The next regular WBAI LSB meeting will be held on Wednesday, January 11th, 2012, at “The Commons” in Brooklyn — 388 Atlantic Avenue, between Hoyt & Bond Sts. As per the official announcement this meeting will be, “... to review, discuss and vote on the report from the LSB's Management Search Committee concerning selection of a pool of candidates for the position of Program Director at WBAI. At 6:30 PM there will be a Delegates' Assembly to elect the Pacifica directors from WBAI for 2012, the executive session LSB meeting will begin right after that.

It will start immediately following the conclusion of the Delegates Assembly meeting, where delegates will vote for Directors from WBAI to the Pacifica National Board for 2012. This election occurs every year. All those serving on the Local Station Board (except the GM) are ‘delegates’ under the bylaws and may take part in that vote.

The LSB has invited all members of the Management Search Committee, whether on the LSB or not, to attend and participate in the Executive Session meeting.

Here are the Officers elected for 2012

WBAI has an official Web stream of what's on the air at any time! You can go here and pick which type of stream you want! If this stream isn't working let me know. And you can see the status of the streams at any time by clicking here. The stream was working at 03:18 this morning. The station has a Flash stream here, make sure you enable Javascript so it can work for you.

The day after our last program we heard that our old WBAI colleague and friend Lynn Samuels had passed away on December 24th.

We'll be talking about Lynn on this program. We'll probably be one of the last programs to eulogize our old pal, since she passed away almost two weeks ago now. I'll post more up here after the program, too.

On the left is some nice looking science related eye candy courtesy of the folks running the Cassini probe that's charging around the Saturnian system these days.

That large, round object at the center of the photograph is Saturn's satellite Titan, the largest satellite of any planet in the Solar System. Titan is actually larger than the planet Mercury. It's so large that it has a substantial atmosphere. In fact you can see a little bit of that atmosphere at the very top of Titan's disk. That's not a blurry outline, that's a thick atmosphere you're looking through.

Beside Titan is the smaller satellite Dione. Dione is much closer to Saturn than Titan is so from this perspective it looks even smaller relative to Titan.

That yellowy background behind it all is the body of the enormous planet Saturn. That line that's going in back of Titan is a part of one of the rings of Saturn. More rings can be seen below Titan.

What a nice gift to the world to start off the new year this image is. 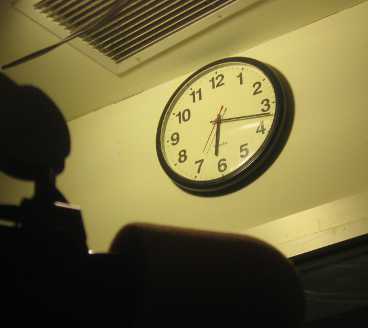 On a couple of previous programs we've complained about the clock in Master Control being out of order and just having a piece of paper over it that said that it wasn't working. Such lack of a convenient place to see the time can have a bad effect on a live radio program.

We're glad to report that the Master Control clock has been restored to working order, or else another clock has been substituted as a replacement. It's good to be able to see the time without craning your neck and going off mic to do so. 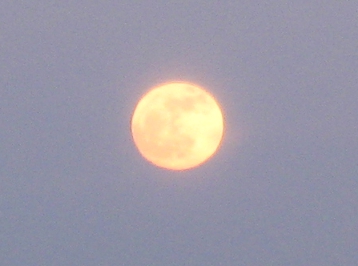 This Moon Would Be Full Early The Next Morning

The first full Moon of 2012, was on January 9, at about 2:30 AM. Yeah, we weren't up right then, and my crummy little camera won't take a decent photograph of a full Moon in the deep, dark wee hours of the morning. It just shows a burned out disk of white in a black background. It's a point and shoot camera and can't be made to just darken everything enough. The older point and shoot camera I have had settings I could fiddle with to stop down the aperture and shorten the exposure and so get a half way decent shot. Unfortunately, that camera's lousy Lithium ion battery died and it was expensive to replace, I also got something on the lens that affected every photograph. It may be paint, which I'll never get off. Well, maybe one day I'll plunk for the Lithium ion battery and just try to shoot around the blobs on that lens that won't come off.

So I was able to take this shot of the almost full Moon when it was a little less than 10 hours away from the exact minute of fullness. There's less contrast with a brighter sky and the Moon's brightness is tempered by the low angle because the light has to come through much more atmosphere. So here's my shot of the first almost full Moon of 2012.