It's Wednesday morning, April 4, 2012, 10:01, and I've updated this Web page with more about the segment of the program where I talked about all of those tests I've been going through for the previous three weeks. More to come. The original top of this page follows the arrow. ⇒ We are planning to have a rather informative program this time around. We'll do our best to deal with a difficult topic. We'll also have our traditional welcome to the Spring season, and we'll see if we can get to the mail tonight, we don't know about that at this time. We're really going to be cramming stuff into this time slot this morning. This Web page will be updated, so check back for those updates. This may be a memorable program, folks.

The next regular WBAI LSB meeting will be held on Wednesday, April 11th, 2012, at a location to be announced.

There was an LSB meeting held this past Thursday, March 29th, 2012, at the “Brooklyn Commons” 388 Atlantic Avenue, between Hoyt & Bond Streets in Brooklyn. This was our second LSB meeting this month. We again mostly heard from Management about how swimmingly things are going. We also elected members to the various PNB committees. Some “Occupy Wall Street” folks were at the meeting and left some rather revealing posters for us to see as we left the meeting at about quarter to one in the morning. The public session had ended at 9:46 PM. After the public session we'd had an executive session.

WBAI has an official Web stream of what's on the air at any time! You can go here and pick which type of stream you want! If this stream isn't working let me know. And you can see the status of the streams at any time by clicking here. The stream was working at 01:47 this morning. The station has a Flash stream here, make sure you enable Javascript so it can work for you.

Spring is here! Yeah, and I'm glad about it. We plan to play our traditional welcome to the season, now that the days are longer than the nights.

On this program I went on, for a while, about the wanderings of Pickles of the North and me over the past three weeks in an attempt to find out about what's been poking my gizzard.

Yeah, my gizzard has felt like it's been getting poked for the past nine months now. What with all sorts of delays, and the pace that things sometimes move at with the V.A. Hospital, it took a while. So far all we know is that the various scans have revealed what one doctor told us is a soft tissue mass that's two centimeters by four centimeters in size.

So this thing has been poking my gizzard for a while. It's possible that it's actually been in there for a very long time, but I've lost weight, on purpose, over the past 22 months or so, and having significantly less fat insulating my gut may have finally brought this thing into contact with the old gizzard. We have spent those three weeks getting all sorts of tests and scans done. I've been injected with a bunch of radioactive concoctions, and some non-radioactive ones, over those weeks.

Well, we should find out pretty soon if they can tell me exactly what the hell this thing is that's been poking my poor gizzard. I hope that I don't get a diagnosis of gizzarditis.

Maybe I should think about starting a foundation to fight gizzarditis. Yeah, I could start doing public service announcements about the scourge of gizzarditis.

Well, I'm sure that we'll have more to report on this in the near future.

An “Or Else” From Occupy Wall Street

So we had the second WBAI LSB meeting of the month on Thursday night. To the right is a piece of commentary they had on one of their posters, which they left on the ground outside. So they're telling us that either we “concede” or we're just a bunch of phony liberals. Wow, I guess this is what passes for progressive activism from some of the Occupy Wall Street crowd, at least the bunch that seems to think they are owed air time at WBAI.

They also have demands about how the WBAI Local Station Board must add 12 more seats that will be reserved just for “youth,” which they claim to all be. Of course this isn't something the LSB can do. The composition of the LSB is set by the Pacifica bylaws. Apparently some folks are just not interested in learning about WBAI. 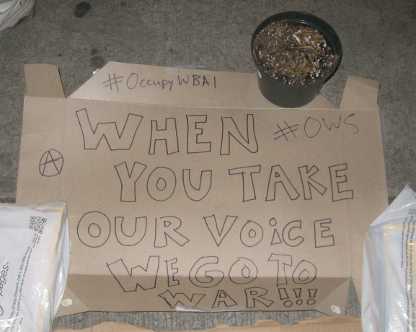 This poster is kind of disturbing. Of course the Occupy Wall Street crowd just lets anyone identify with them. But someone who threatens to go to WBAI with war if they don't get their way is really not the sort of person who should be at WBAI in the first place.

I hope that some other Occupy Wall Street people will distance themselves from this sort of threatening language.

I don't know if we'll have time to get to it, but if we do we'll talk a little bit about the discovery of hypervelocity planets. 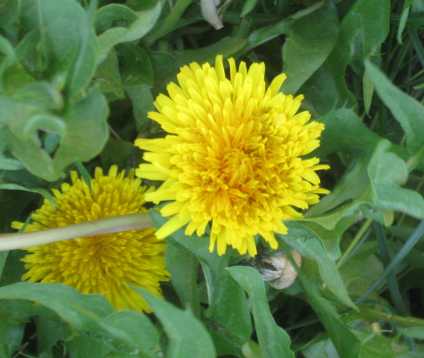 So sometimes we like to end a Web page with a little something from the past fortnight. And in the proper seasons the Web page ending image is frequently flowers.

Jeez, I have to say that I never imagined that at some point I'd be posting images of flowers from people's gardens on line. Well, in my old age I am. There's some old saying about it being a good idea to remember to stop and smell the flowers. You can't smell these over the Web, but you can appreciate the photograph. So enjoy the dandelions.