It's Sunday morning, August 5, 2012, 03:15, and I've updated this Web page with the piece about Dan Siegel's speech regarding what he thinks should be done with WBAI. I have a link to a Web page containing the audio of that speech. I've also corrected the damned spelling errors that were on this page. More to come. The original top of this page follows the arrow. ⇒ We plan to get to the below topics and much more on this program, including someone's plans for WBAI. So we will be updating this page soon. Please check back for the updates.

The next regular WBAI LSB meeting is scheduled to be held on Wednesday, August 8th, 2012, at Alwan-for-the-arts, 16 Beaver Street, 4th floor, in downtown Manhattan.

The WBAI LSB met on Wednesday, July 11th, 2012, at Alwan-for-the-arts, 16 Beaver Street, 4th floor, in downtown Manhattan. For the third time as many meetings I got to make a Treasurer's Report. I talked about the current quite bad state of WBAI's and Pacifica's finances again. During this one LSB member, Russell Dale of the so-called Justice & Unity Campaign talked about how the solution to WBAI's problems is to get underwriting for the station, some big, rich person or entity that could just give us a lot of money to operate on. Dale's fellow faction operative Ray Laforest agreed and joked that we needed a “sugar daddy.” Of course this is exactly the sort of thing that WBAI and Pacifica were founded to avoid. Any big underwriter would have an influence on the radio station's programming, there's really no way around it.

But all that these faction operatives know is that they want to bring back the disastrously failed Management of the past to WBAI so that they can resume getting paid off in air time, paid positions they're not qualified to fill and occasionally a cut of the actual loot that their pal could collect. 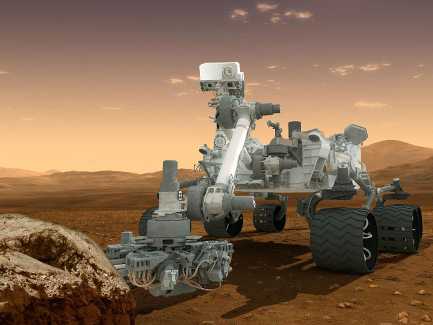 We brought up the subject on our last program, and we'll talk about it more on tonight's program. The Mars Curiosity rover, the largest Mars rover yet. This rover is looking for signs of life on Mars, both signs of life currently living in the harsh environment of the planet and signs of ancient life that lived there for a while but has probably long since died out.

The latest Mars rover will land in Gale Crater at about 1:31 AM (ET) this coming Monday morning August 6. This will be a complicated landing both for the rover and for those at NASA. The rover will be dropped into Gale Crater by a rocket and parachute lander, which will then fly clear of the rover's landing zone. But on Earth we won't be seeing live video of the landing from Curiosity because the Earth will be below the horizon in the vicinity of Gale Crater when Curiosity makes its landing. The Mars Odyssey Explorer is expected to relay video of the landing from orbit.

One instrument aboard Curiosity, the Radiation Assessment Detector has been working since the spacecraft was launched November 26, 2011.

We're certainly hoping that Curiosity makes a good, safe landing on Mars and is able to fulfill its nominal two year mission.

You can watch the NASA coverage of Curiosity's rather complicated landing here.

It's mid-Summer, at least astronomically speaking. The exact minute of mid-Summer will be less than 13 hours after Curiosity lands, that is on Monday August 6, 2012, at 2:59 PM (ET). More on the season dates here.

On this program we talked a little bit about a threat to WBAI from some folks at another Pacifica radio station. At the KPFA LSB meeting of July 7, 2012, Dan Siegel, who is a member of the KPFA LSB and also a member of the Pacifica National Board, which is in a position to make most of the decisions about what Pacifica does, made a speech. Some of what Mr. Siegel said, was, “I don't know if it's true or not anymore, but a few years ago at least it was possible there were actual people who would buy WBAI for enormous amounts of money, and that part of the deal in exchange is that WBAI would get a new spot on the dial  admittedly, a less attractive one in the eyes of the person who wanted to buy it. Now we've always been extremely resistant about even thinking about ideas like that but given 1) the urgency of the situation, and 2) the fact that BAI really has a tiny number of committed listeners making that change doesn't seem as radical as it might be anymore.”

I played the audio of this speech on the air. You can listen to Dan Siegel's entire speech here. The audio clip is two minutes and forty seven seconds long and it shows that Mr. Siegel, who is in a position to initiate actions that could greatly hard or totally destroy WBAI, really is threatening the radio station.