It's Saturday morning, September 29, 2012, 01:53, and I've done some tiny updates to this page. Maybe one day I'll actually finish it. The original top of this page follows the arrow. ⇒ We plan to talk about 9/11 just a little bit on this program. We also plan to get to the below topics, and we would certainly like to get through some mail. Check back for updates.

The next regular WBAI LSB meeting is scheduled to be held on Wednesday, October 10 2012, at a location to be announced.

The WBAI LSB met on Wednesday, September 12th, 2012, at Alwan-for-the-arts, 16 Beaver Street, 4th floor, in downtown Manhattan. I've got an entire page about this meeting here.

The Middle Third was over on our last program, and Summer will end a week from today. The Autumnal Equinox will occur on Saturday, September 22, 2012, at 10:49 AM (ET). For more on the seasons and sub-seasons you may feel free to loiter here.

This week WBAI Management has launched the BAI Buddy initiative. The idea is to get people to pledge on a regular basis so that we don't have to pitch so often on the air.

Go here and look at the BAI Buddy Web page.

Some of the selling points on this are:

So maybe we can pitch for fewer days this way. More programming, less pitching, that sounds like a good idea. And if you want to contribute more than $10 a month you can do that too. 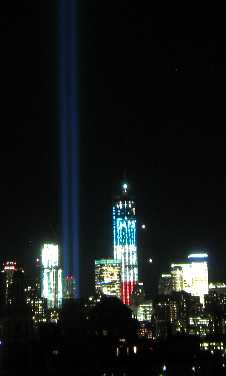 Of course this past week was the 11th anniversary of the 9/11 attacks by al Quaeda which killed 2,977 victims in New York City and Washington, D.C.

We plan to talk about this a bit.