It's Thursday, October 4, 2012, 08:39, and I've updated this page with the location of the next WBAI LSB meeting. More to come. The original top of this page follows the arrow. ⇒ We plan to get to the below topics tonight, and we definitely plan to get to the mail tonight. Check back in for updates.

The next regular WBAI LSB meeting is scheduled to be held on Wednesday, October 10 2012, at Alwan-for-the-arts, 16 Beaver Street, 4th floor, in downtown Manhattan.

The WBAI LSB met on Wednesday, September 12th, 2012, at Alwan-for-the-arts, 16 Beaver Street, 4th floor, in downtown Manhattan. I've got an entire page about this meeting here.

We will be pitching on our next program on October 13st. We'll be pitching as a part of the WBAI Fall 'Thon. We'll be hoping to raise enough money for the station to survive for the next few months. 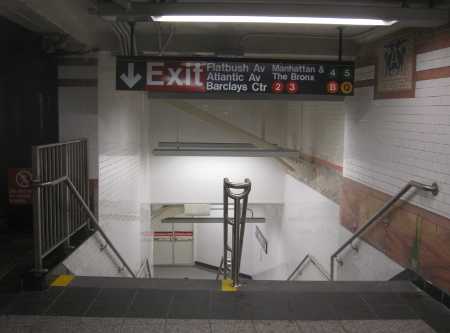 The New Exit for Atlantic Ave.

So last night saw the opening of the Barclay's Center in Brooklyn. The TV news I saw was promoting it with a puff piece at the very top of their program. Yeah, the U.N. is in session with all sorts of threats being made by various nation states to destroy each other or bend the other to their will, but the opening of this business venture was what needed to open up their broadcast.

The really annoying thing is that they never once mentioned that loads of people were de-housed by this project. The the use of the noxious eminent domain trick the state government was able to throw people out of their homes, and then destroy their homes to make room for this thing. It's disgusting.

The photograph on the left is from this past fortnight. It's of the newly opened south exit from the platform at the Atlantic Ave. stop on the IRT line in Brooklyn. This used to be a closed off area where they threw garbage. It was level with the platform. We used to marvel at the population of nimble rats that used to cavort right where this exit is now. They weren't quite as brazen as the rats at the 14th St. station on the IRT in Manhattan, but they were populous. Eons before that there had been an exit from the station a hundred feet or more down the corridor that's no longer there. Yeah, the MTA really does care - about sucking up to corrosive entrepreneurs.

Well, I think that this is just an awful whole thing here. And all of those jobs that this complex was supposed to bring in are mostly still in the promise stage. Feh!

Some astronomers have done some new experiments which they say adds even more evidence that dark energy is real.