What a surprise, we're pitching on this program! Actually, it was a surprise to us. We'll do what we can. We plan to talk about the below topics and more. I'm hoping that I can get this Web page updated pretty soon.

The next regular WBAI LSB meeting is scheduled to be held on Wednesday, December 12, 2012, at Alwan-for-the-Arts, 16 Beaver Street, 4th floor, in downtown Manhattan. A Delegates' Assembly will precede the LSB meeting. The Delegates' Assembly is scheduled to start at 6:30 PM and will meet to consider the bylaws amendments to the Pacifica bylaws. Actually, the Pacifica Web page about these amendment is all screwed up with a popup menu that will not go away. So I've posted those amendments that the Delegates will be voting on on December 12, here: bylaws amendments December 2012.

The WBAI LSB attempted to hold a regular meeting on Wednesday, November 14th, 2012, however the venue was unavailable due to damage from super storm Sandy.

Because WBAI has been forced out of its studios by the flood waters' destruction of the building's electrical system you will need to go here to listen the temporary stream for the radio station! This emergency stream should only be necessary for maybe another week at most. If this stream isn't working let me know.

We're pitching on this program!

Give Us A Call!

Yeah, too bad we hadn't known about this when we were doing the previous program. We'd known that there would be pitching in December, but we didn't know if it would involve the overnight programs and we thought that his 'thon would start later in the month. Well, this will tell us if there's still anyone listening who will contribute to the program and the station. WBAI is still reeling from the effects of the super storm, and our phones are out, which is the case with a lot of places in lower Manhattan. So we're not sure of the phone number, we'll just announce it on the air.

I really do hope that enough of you are listening this morning to make some pledges so we don't raise zero.

Yeah, some of the flooded phone lines of lower Manhattan used to serve phones just like the one on the right.

The Supreme Court will take up the same gender marriage issue this term. We'll talk about this a bit. 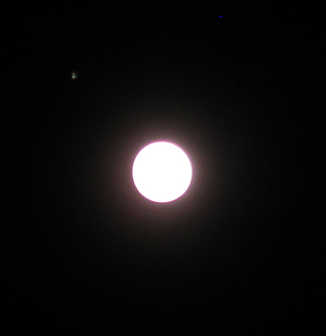 On November 28, we saw the Full Moon rising and there was Jupiter right by it. This is the sort of thing that we miss out on a lot in modern times. Most folks don't even realize that there is a sky at night.

The photograph is not great, I know. Our little camera has very little we can do to adjust the settings. We're lucky we got Jupiter in there at all. I had to make the camera less light sensitive and then I could only get this shot by putting a pair of sun glasses in front of the lens. Not exactly great photography stuff, but I am not a photographer.

The fuzzy, light bit above and to the left of the full Moon is Jupiter. In real life it was much brighter looking. The camera sees all of the darkness of the night sky and then sees that full Moon and averages everything out, even when I have it on spot metering. So the Moon gets over exposed and it burns out everything else, leaving Jupiter looking less than spectacular.

And this afternoon, December 8th, is the last time until next December when we have the Sun setting in the Greater New York area at 4:28 PM (ET). Oh, I'm just waiting for the Middle Third of 2013, to start up.

For more on the dates of the seasons and sub-seasons click here.