It's Friday, February 15, 2013, 21:06, and I'm having to update this page yet again, second time today. I wanted to get out the news that we were informed at 8:30 tonight that this was not our last broadcast from 120 Wall St., due to technical difficulties at the CCNY broadcast facility. I have posted a couple of photographs on this page showing one store that was devastated by super storm Sandy but is back in operation, not a common outcome. I have also amended the notice of the next LSB meeting. The original top of this page follows the arrow. ⇒ Mad Rush! This will most probably be our last program from 120 Wall St. I'll update this page later on. No, really, I will.

The regular WBAI LSB meeting scheduled to be held on Wednesday, February 13, 2013, has been cancelled. A meeting of the LSB may happen on February 28, 2013, if space can be found for it.

We will be pitching on our next program on February 16th. We'll be pitching as a part of the WBAI Winter 'Thon. We'll be hoping to raise enough money for the station to survive in our new split situation.

Usually we ask that people send us a check if they can't listen to the program live. However, WBAI is moving. We are not sure where the mail should be sent to in order that we might be able to get it on February 2. We will have a new address, and Management says that they haven't figured out how to handle the Staff mail with the new situation where the station is in two parts that are located miles apart. Where will our physical mail be sent? Well, as a result of that situation we figure that we should not ask anyone to send a check this time. But we will be pitching on the next program, maybe on the next two programs, and we hope that everyone who listens will pledge then.

Well, we're rushing. We'll be doing all sorts of things on this program, but I don't have the time to do this Web page right now. 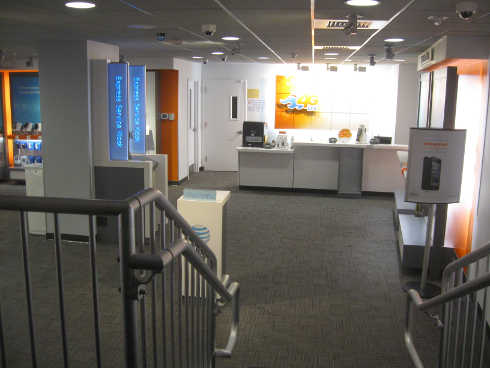 The AT&T Store Restored After the Flood

Well, at least one place is back. The AT&T Store on the northwest corner of Wall and Water Streets is back in operation. This was a photograph we took as we hurried down to the station for our January 19th, program.

A lot of businesses have folded in lower Manhattan as a result of the flood. Quite a few street level and basement stores are simply gone because the space they'd occupied is still not inhabitable.

The AT&T cell phone store is somewhat below grade, as you can see from this shot of the steps leading down from the sidewalk level, and it got destroyed. But AT&T is a wealthy company and they could afford to totally replace everything. Of course we haven't been in that store so we're not sure if they have completely defeated the mold that is plaguing so many of the buildings down there. 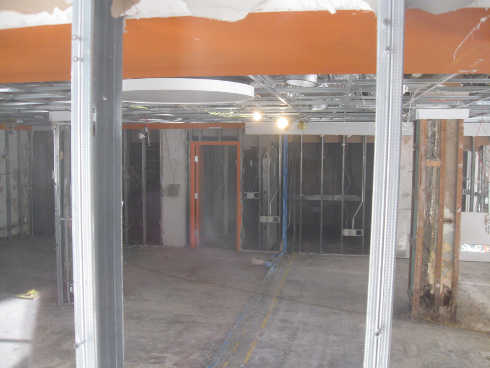 We had taken photographs of the stripped down store after the Wall St. Flood that was the result of super storm Sandy. They stripped everything in there down to the bare concrete and steel of the building. I think that they had to replace 100% of the electrical setup of that space too. When the East River came down Wall St. that store was well under water, so it had been flooded to above the level of its ceiling.

I guess that shows that if you have lots of money you can really recover from something as devastating as that flood, and do it fairly quickly. Of course it took time to dry out that whole space and all. And WBAI should be leaving that area pretty soon.