Web links related to the Back of the Book program of January 30, 2006


It's Sunday night 2/12/2006 22:40:56 and although this page isn't done yet I've put in a link to a page of our wedding photographs. We're married! We'll be covering the below issues and more on tonight's radio program.

The next WBAI Local Station Board meeting is scheduled for Wednesday, February 15th, 2006. Location to be announced.

Our colleagues from Off the Hook now have both a RealAudio streaming web cast operating, and a new MP3 stream. The MP3 feed is now the preferred feed. Both feeds were working at 10:27 PM last night.

WBAI is now archiving the programs! Just go here and you'll be able to listen to the program any time for the next couple of weeks. Unfortunately, Back of the Book is not one of the programs that you can download, you can only listen to it on line. But maybe someone will change that at some point.

Well, Pickles of the North and I got married this fortnight. 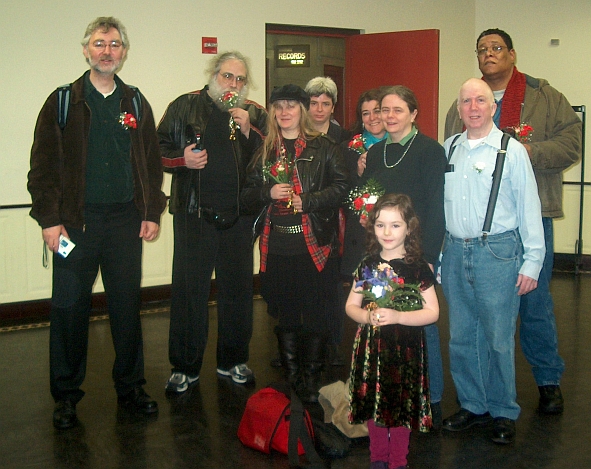 It is amazing to me that we actually got married, but we sure did. And we have the official piece of paper issued by the State to prove it!

You can tell that we all got dressed up for this event.

By popular demand here is a page where I'm putting more of these wedding photographs.

And this past week we even went on our honeymoon to Atlantic City, New Jersey. We walked around on the Boardwalk there, but we didn't go in swimming for some reason. And we gambled and won! Let's just say that our entire winnings didn't pay for one meal.

We're going to talk about all of this tonight, and we'll cover various other things as well. And Pickles of the North and I celebrated our ninth anniversary together this past fortnight.

The 'thon was pushed back by two weeks, so that means that on the next Back of the Book radio program we'll be pitching again!