Web links related to the Back of the Book program of February 13, 2006


Well, it's Sunday night 2/26/2006 20:42:16 and this page is very slightly updated. I plan to update it more. Let it snow! We have news of a brief takeover of the city below, and we're going to talk about various things, but we are mainly going to ask you to support this radio program and this radio station tonight by calling in at 1-212-209-2950 to pledge.

The next WBAI Local Station Board meeting is scheduled for Wednesday, February 15th, 2006. at 6:30 to elect Listener & Staff Members to the Pacifica National Board Committees will be held at the Brooklyn Neighborhood Office of the Legal Aid Society, 111 Livingston St., 7th Floor, Brooklyn. Take the 2, 3, 4, 5, to Borough Hall, or A,C,E,F to Jay St./Borough Hall or the R to Court St. in Brooklyn. The location is wheelchair-accessible and public comment is welcome.

Our colleagues from Off the Hook now have both a RealAudio streaming web cast operating, and a new MP3 stream. The MP3 feed is now the preferred feed. Both feeds were working at 10:29 PM last night.

WBAI is now archiving the programs! Just go here and you'll be able to listen to the program any time for the next couple of weeks. Unfortunately, Back of the Book is not one of the programs that you can download, you can only listen to it on line. But maybe someone will change that at some point. Update: the archives have been screwed up for some weks now and this program wasn't archived. So I've done an archive of the air check myself and posted it on another site. Note that I've had to strip out the music portions for copyright reasons.

Al Lewis, who did a program on WBAI, passed away this past fortnight. I didn't know him very well, but we'd met and talked a few times. There are some questions about his age and some other things. We'll try to fill out this remembrance of him as we get more information.

We are pitching tonight! It's very important that we raise a good amount of money tonight so if you can please pledge when we start begging on this program. Help keep Back of the Book on WBAI and help keep WBAI on the air! 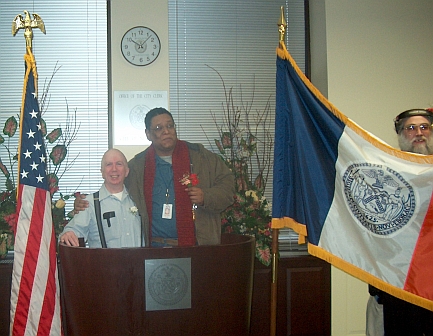 In the photograph you can see the Saddle Pals, R. Paul, Uncle Sidney Smith and Maxwell J. Schmid as we took over the City of New York recently.

Yes, we actually took over the entire city. But we gave it all up because we wanted to pitch! That's right, we wanted to pitch and get you to support our radio programs and WBAI. So we just gave the city back to the morons who are currently running it. Well, running New York City also got boring, but we mostly gave it back so we could pitch!

The phone number for the pledge line is 1-212-209-2950. Please call in and pledge. It's $25 for a regular one year subscription, but we'll take more. Additionally, there are premiums that you can get if you pledge more. Ask the volunteers take the phone calls about the premiums.

So please do call and pledge. We will really appreciate it if you do.

UPDATE: We raised $1,635 pitching on this radio program. Thanks to all who pledged and thanks also to those who did Tally and took the calls. And if you pledged please remember to fulfill your pledge when you get the bill for this 'thon.

Oh, yeah. Here are some of the photographs we have from our wedding. I'll be adding more as I get the time and I'll be labelling them better and probably cropping them so that you can fit them into your browser.

We're going to talk about freedom of speech and some things going on in the world around that during this radio program. We'll see if we can avoid getting in trouble with our free speech!

And we'll also talk about the Snow Moon, which is happening as we try to dig out or through the snow storm we just had!