Web links related to the Back of the Book program of June 2, 2008


It's Sunday evening, June 15, 2008, 20:06, and this Web page is finished. I've updated this Web page with the location of the next LSB meeting. The Supreme Court continues to erode our rights. The Phoenix has landed. And the Governor of New York State is going to allow same gender marriages to be legally recognized. All this and more on tonight's radio program. I'll probably be updating this Web page over the next week or so, you might want to check back in to see what's new.

Did you know that I've got a brief synopsis of many of the WBAI LSB meetings? Well, I do, and I've updated them recently.

We posted the election results from the WBAI elections on the Web page for the April 21, program.

There's an adjourned LSB meeting scheduled for this coming Wednesday June 4th, at 7:00 PM, in Local 1199's Cafeteria , at 310 West 43rd St. between 8th & 9th Avenues, in Manhattan. This meeting will be a continuation of the May 21st meeting.

The May 21, 2008, WBAI LSB meeting saw the faction that used to have a majority on the LSB still trying to ram through bad ideas, like having the LSB take an hour to decide about WBAI's off-air fund raising strategy for the rest of 2008. We probably need to pay a little more attention to detail than that.

This meeting didn't finish its entire agenda so we've scheduled a continuation of this meeting for this coming Wednesday.

WBAI has an official Web stream of what's on the air at any time! You can go here and pick which type of stream you want! If this stream isn't working let me know. The stream was working at 9:01 PM last night.

The Supreme Court has handed down a ruling that has serious implications for anyone who believes in free speech.

What they've done, in United States v. Williams No. 06-694, is say that someone can go to jail for 5 years for saying that something is “child pornography” and either offering it to someone or asking for it, acts which the law calls “pandering.” And it doesn't have to be child pornography at all, in fact what's being offered or asked for doesn't even have to exist!

Now on its face this might not seem to be a terrible law, but when you look at the potential for abuse it allows you can see that it's a serious infringement on people's First Amendment rights.

“Child pornography” is illegal to possess or trade in the United States of America. However, pictures without real minors in them are legal. This would include things like computer generated images and line drawings.

What this new decision does is validate a law that was passed by Congress in 2003, that criminalizes offering these legal images or drawings to anyone, or requesting them, as “child pornography.”

Now even there some people will say “So what?” Well, the problem comes when people are interpreting offers and requests. We now have to worry about whether some ambitious prosecutor will interpret what someone says to mean that they are offering or requesting “child pornography” when they're referring to something that is protected by the First Amendment and is legal.

This decision passed by a vote of 7-2. Here are some excerpts from the dissenting opinion written by Justice Souter, with Justice Ginsburg joining:

“In failing to confront the tension between ostensibly protecting the material pandered while approving prosecution of the pandering of that same material, and in allowing the new pandering prohibition to suppress otherwise protected speech, the Court undermines [previous Supreme Court decisions] in both reasoning and result. This is the significant element of today's holding, and I respectfully dissent from it.”

“What justification can there be for making independent crimes of proposals to engage in transactions that may include protected materials?”

“Eliminating the line between protected and unprotected speech, guaranteeing the suppression of a category of expression previously protected, and reducing recent and carefully considered First Amendment precedents to empty shells are heavy prices, not to be paid without a substantial offset, which is missing from this case.”

Hell, what if some artist does an abstract painting that depicts no real discernable images at all and titles it “Child Pornography;” would that person be liable for prosecution under this law? Sounds like that might be the case.

As a result of this decision I have decided to prophylactically censor one of my Web pages where I was deriding an organization of right wing idiots who were saying that some 1999, Calvin Klein ads for children's underwear were “child pornography.” See how people can twist things? And for any prosecutors who may stumble across this page, this Web page is not “child pornography,” it is simply disagreeing with others who claimed that the Calvin Klein ads were. So go arrest them! Here's the page I've censored. If I can find out that there is no chance that I'd be prosecuted for it I'll restore it to its original condition.

New York Governor David A. Paterson has announced a new state policy of recognizing same gender marraiges from Canada and various states that will perform them. Of course this has caused something of an uproar among those opposed to such unions and to gay rights in general.

And we also talked about what Reuters described as “small, scattered protests” by gay activists in Moscow, where the government has refused to grant permits for marches and demonstrations. Moscow Mayor Yuri Luzhkov, who has called homosexuality “satanic.”

A small group of gay activists protested outside the Tchaikovsky music conservatory. Petr Ilyich Tchaikovsky was gay, of course.

A couple of years ago an attempt to hold a gay right march was met with arrests and physical attacks by russian nationalists and Russian Orhtodox Church fanatics.

The Phoenix lander made it to the planet Mars safely and has started taking some photographs.

Pickles of the North and I watched the final stages of the landing over the Internet. It was quite a tense hour and a half as we waited for the lander's signal to reach the Earth and inform those who'd sent it that it had landed safely. There were a lot of things that could have gone wrong with this landing.

Also interesting was that the actual news was delayed by about 20 minutes because the Earth and Mars are about 20 light minutes apart right now. So all of the drama was over and the Phoenix had safely landed near the Martian north pole before the news of its entering the atmosphere of Mars had reached Earth. 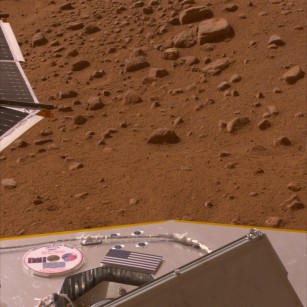 The tricky landing went better than anyone had hoped, with the Phoenix ending up at an angle of only about ¼° off vertical. That was a lot better than they had expected. In fact Phoenix's landing site had been changed at one point last year when it was discovered that there were boulders there which could have tipped the lander over as it came in for its fully automated landing.

In one of the photographs here we can see the DVD with the names of about 250,000 people on it, along with the digital text of War of the Worlds by H.G. Wells, the famous Orson Welles radio program of the same name, broadcast in 1938, Percival Lowell's book Mars as the Abode of Life complete with maps of the canals of Mars, some other science fiction works relating to the red planet and some artwork. The DVD was compiled by the Planetary Society. And Pickles and my names are on that DVD along with Uncle Sidney Smith's.

The other photograph is the most recent one and it shows what scientists are thinking is some ice directly beneath the Phoenix lander. The dirt has been cleared off the suspected ice by the rockets that fired for the last few seconds of the lander's flight to ensure its safe landing.

We also talked about the old tree in our backyard being cut down this past fortnight. It was a sad event and Pickles of the North was very upset about it. That Norway Maple was probably almost as old as the apartment building we live in. Pickles is still sad about it. Was there some issue, or could the landlord, whom we're presuming ordered the tree cut down, have just had it pruned? Whatever, we will now have our first Summer without that tree.