Oh, it's Sunday evening, July 11, 2010, 18:24, and this Web page is finished. I've updated this Web page with a link to an entire Web page of photographs and commentary about the Christopher St. Liberation Day March and the information about the LSB meeting being apparently cancelled. Previously I've updated it with the information about the nomination phase of this election being extended. The original top of this page follows the arrow. ⇒ This will be our annual Gay/Lesbian/Bisexual/Trans Pride program. As an ancient, and grouchy, old militant gay activist I'll talk all about old stuff. And I'll get to more stuff as well.

Did you know that I've got a brief synopsis of many of the WBAI LSB meetings? Well, I do, and I've updated this stuff a bit pretty recently.

The next regular WBAI LSB meeting will be held on right now I'm no longer sure of the date, at 7:00 PM at a location to be announced.

The June 9, 2010, LSB meeting once again saw faction operatives being disruptive during the meeting. Here's a little bit about what happened at that meeting. One of the low lights of the meeting happened at the end when faction operatives slandered a woman who is active in WBAI governance. When that woman got up during the Public comment segment of the meeting to refute the lies Sara Flounders, a member of the “Secretariat” for the so-called Workers World Party, disrupted the meeting and shouted so that the woman couldn't be heard. The faction can't handle the truth.

WBAI has an official Web stream of what's on the air at any time! You can go here and pick which type of stream you want! If this stream isn't working let me know. And you can see the status of the streams at any time by clicking here. The stream was working at 9:44 PM last night. They have switched the server from Virginia to Texas, so that may have something to do with various problems. They have a new Flash stream here, make sure you enable Javascript so it can work for you.

If you want to listen to any part of the WBAI archive click here to go right to the archives. When you first go to the Web page you'll only see the WBAI programs for the past 7 days. If you want to see older programs you can click on one of the “See ALL Shows” buttons.

You can also go here to subscribe to the podcasts of Back of the Book and Carrier Wave.

There was an election going on in Pacifica, so there were a few candidates attending and speaking during the public comment sessions. Some disrupted the meeting.

And the PNB has also met in Houston from Friday October 9th, through Sunday October 11th. The official audio archive of that meeting is here. It was not disrupted as the New York meeting was, although some of the same miscreants got out there to say stupid things.

The Executive Director of Pacifica, Arlene Engleheart, appointed another new interim General Manager of WBAI on June 24. So far there's been a Staff meeting to introduce Berthold Reimers as the new iGM, but Pacifica Management has not issued anything in writing yet. When they do I'll post a link to it.

The 2010, Pacifica election cycle has begun. A National Election Supervisor has been hired, she is Renee Asteria. The official Web site is here.

The 2010 Local Station Board Elections Have Begun!

This election is crucial for the survival of WBAI and Pacifica. The Sixth WBAI LSB, which will be created by this election, will last for two full years. WBAI and Pacifica are in a precarious position right now as current interim Management attempts to reverse the death spiral that the station and the network have been in for years. If some bunch of chuckleheads gets a majority on the WBAI LSB they'll be able to change the composition of the Pacifica National Board and revert to corrupt, incompetent and malfeasant Management, they might even sell WBAI.

The official Web page where you register to get a nomination package is here. 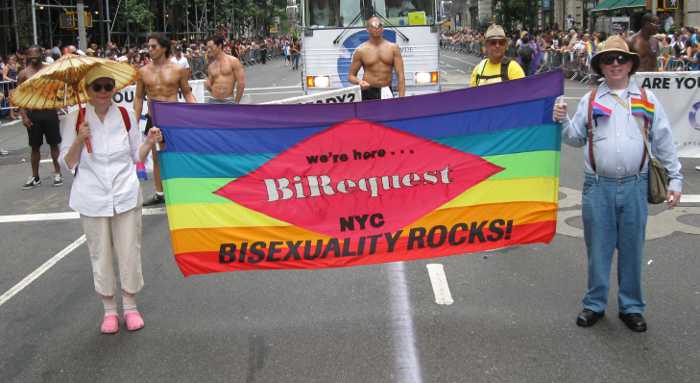 Pickles of the North and R. Paul Martin Carrying the Bi-Request Banner at the 2010 Pride March

Well, it was another Lesbian/Gay/Bisexual/Trans Pride March on Sunday. Naturally I always refer to it all as Christopher St. Liberation Day, which is what it is. This day commemorates the Stonewall Riots of 1969, when gay people fought back against yet another awful bar raid.

Pickles of the North and I marched in it again.

This was a very truncated march. The city has new rules about these sorts of things and They now have a limit for the length of a march's route and also a time limit for how long it can last. So we lined up on E. 40th St. and kicked off at 12:30 PM, as opposed to being on W. 54th St. and kicking off between 2:00 and 2:30 PM.

Pickles of the North and I were all done marching at 2:14 PM. We're usually just starting out at that time! And we got to be on Fifth Ave. for the Moment of Silence at 1:00 PM for all of those who've died of AIDS. We were right by Marble Collegiate Church, where they tolled their bells for the minute. There was a second Moment of Silence at 3:00 PM, but we were not in the march anymore, although we were going through the Pride Fest. When I looked at my watch after we'd walked through the Pride Fest and while we were at the stage I saw that it was 3:08 PM I noticed that they hadn't observed the Moment of Silence at 3:00 PM.

So this was the shortest Christopher St. Liberation Day March ever, as opposed to the one 30 years ago which was referred to as “The Long March.” Oh, I plan to talk about that one tonight.

Here's a Web page I did with a bunch of photographs from this year's Pride March.

The contents of this Web page are copyright © 2010, R. Paul Martin.