It's Saturday afternoon, April 7, 2012, 15:43, and I've updated this Web page with a short (too long) rant about that damned blinking light I complain about periodically. Previously I'd added the list of program Web pages I'd updated during the fortnight before this program, I've also corrected a typo or two. More to come. The original top of this page follows the arrow. ⇒ All right, this is the last radio program of Winter. Spring is rapidly approaching! Pickles of the North is on assignment at the North Pole for this program. I'll be updating this Web page, so check back soon.

There will be an extra WBAI LSB meeting held on Thursday, March 29th, 2012, at the “Brooklyn Commons” 388 Atlantic Avenue, 2nd floor between Hoyt & Bond Streets in Brooklyn.

There was an LSB meeting held this past Wednesday, March 14th, 2012, at the “Brooklyn Commons” 388 Atlantic Avenue, 2nd floor between Hoyt & Bond Streets in Brooklyn. We mostly heard from Management and the Development Director about how swimmingly things are going. After that we had an executive session.

WBAI has an official Web stream of what's on the air at any time! You can go here and pick which type of stream you want! If this stream isn't working let me know. And you can see the status of the streams at any time by clicking here. The stream was working at 01:47 this morning. The station has a Flash stream here, make sure you enable Javascript so it can work for you. 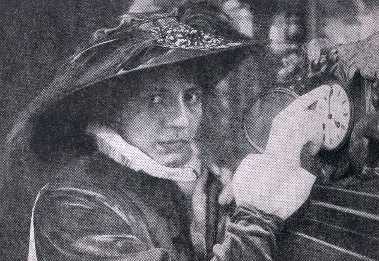 R. Paul Got All Dressed Up To Set the clocks Forward

Daylight Saving time is back! Yay!

And Spring is nearly upon us! The Vernal Equinox will occur on Tuesday March 20th, 2012, at 1:14 AM (ET). So not only will the Sun set later, but the days will be longer than the nights. Oh, I am looking forward to that! More about the season dates here.

I remember him as Robert Manning, the kid who sat in front me me for most of my time in high school. They lined us up alphabetically so Martin came right after Manning.

Why I'm talking about him on this program has to do with his death as PFC Robert Manning on March 24th, 1969.

Here's some information about him and his death, although the folks who put it together didn't know his religion. And here's another page about PFC Manning.

This thing is so annoying!

So since Pickles of the North wasn't here for this radio program I completely forgot to try to do anything about this annoying blinking light that we have in Master Control at WBAI. Pickles usually throws her coat or something over the light stalk before we go on the air. By the time I realized I needed to do something about it I was on the air and couldn't get anything to throw over the damned blinking light.

This thing starts to blink the second you open a mic in Master. And it keeps on blinking until you turn the mic off. I find this awfully distracting. Other producers do too. Complaints have been made about it, but the thing's still there more than two years after it was installed.

This annoyance was installed to remind people that the mics are open. This was done after some incidents where people said things that they thought were off-air but which went out over the air. The problem is that we have people on the air at WBAI who have little or no training. Some very basic training will get you to reflexively look to see if the mics are open, and if you can't tell if they're open you just default to assuming they are and you don't say stuff that you don't want going over the air.

Well, training is apparently still anathema at WBAI and so we have this idiot light for radio to remind the untrained that they're on the air and to annoy those of us who are not so pleased with having a light blinking on and off in our faces.

Yeah, something else that will probably never be dealt with properly. 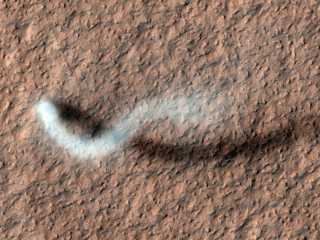 A Dust Devil Swirling Around on Mars
Photo: NASA/JPL/University of Arizona

On the right is a recent photograph of a dust devil on Mars. The photograph was taken by the High Resolution Imaging Science Experiment (HiRISE) camera on NASA's Mars Reconnaissance Orbiter.

The dust devil, just some swirling wind, we gets lots of them on Earth too, was observed in the Amazonis Planitia area of Mars. The top of the swirling cloud of dust, the white curve, is more than half a mile high. The dust devil is about 30 meters in diameter. The darker curve in the photograph is not the shadow of the dust devil, it's the track of the dust devil. It's left darker dust in its path.

The wind speed of this thing must be pretty hight. Even though the dust on the surface of Mars can be pretty fine the atmosphere is very thin, about 0.087 psi, as compared to Earth's 14.7 psi. And this part of Amazonis Planitia is about 800 feet high.

Yeah, I think it's just fascinating that we can watch weather phenomena on another planet like this.

One of the science topics I hope to get to tonight will be about the scientists at CERN producing enough anti-hydrogen atoms to start doing spectroscopic analysis of the stuff.

An anti-hydrogen atom consists of an anti-proton and a positron, an anti-electron.

We're all surrounded by, and made of, ordinary matter atoms. But anti-matter atoms are just not around, at least not anymore. So the scientists are going to see if the spectroscopic analysis of this anti-hydrogen is at all different from that of ordinary matter. Prior to these experiments no one's been able to confine a sufficient amount of anti-protons and positrons in a state where they are cold enough to combine into atoms and could then be examined.

It's possible that there may be subtle differences between the anti-hydrogen and the ordinary hydrogen that's all around, and inside, us. If that's the case then the differences may give scientists a big clue as to why we only see matter and no anti-matter.

I have updated the following program Web pages over the past fortnight: