There was an LSB meeting held on Thursday, March 29th, 2012, at the “Brooklyn Commons” 388 Atlantic Avenue, between Hoyt & Bond Streets in Brooklyn. This was our second LSB meeting this March. We again mostly heard from Management about how swimmingly things are going. We also elected members to the various PNB committees. Some “Occupy Wall Street” folks were at the meeting and left some rather revealing posters for us to see as we left the meeting at about quarter to one in the morning. The public session had ended at 9:46 PM. After the public session we'd had an executive session.

WBAI has an official Web stream of what's on the air at any time! You can go here and pick which type of stream you want! If this stream isn't working let me know. And you can see the status of the streams at any time by clicking here. The stream was working at 01:51 this morning. The station has a Flash stream here, make sure you enable Javascript so it can work for you.

On our next program, May 12th, we'll be pitching as a part of the WBAI Spring 'Thon. We'll be hoping to raise enough money for the station to survive until late in the fiscal year.

If you would like to contribute but you figure you may not be able to catch the program when it airs on February 4th, you can always send your donation in ahead of time. A regular one year membership is $25. If you want to send more than $25 that would be great. So, if you can, please send a check made payable to “Pacifica/WBAI” and send it to: 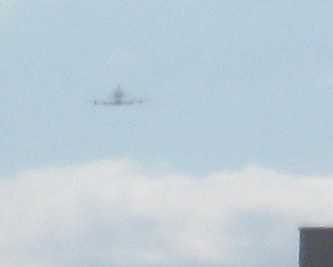 The Enterprise Over Brooklyn

Here we have the photograph I was able to get of the prototype Space Shuttle Enterprise being flown over Brooklyn on its specially built Boeing 747.

Pickles of the North and I saw it much better than this. I had been very pessimistic about our being able to see it at all. But Pickles kept looking out the window for it. And at one point she shouted, “I think I can see it!” And indeed she could. We looked at it with a pair of old field glasses and got quite a view of the Enterprise locked onto the back of the 747. It was only after seeing it that I ran to get the camera and got this shot as it got farther away.

Pickles was thrilled to have sen the thing at all. One listener sent along this image from his and my past. The date was March 14, 1971. We'll try to get to that E-mail on tonight's program. Meanwhile, can you guess which gay activist I am?