It's Thursday night, June 7, 2012, 22:42, and I've updated this page with the location of the next LSB meeting. Previously I'd posted information about where to see the transit of Venus on the web. I also gave an update on the dismal results of our efforts to raise money for the station on this program. More to come. The original top of this page follows the arrow. ⇒ We're pitching tonight. Ugh! But we need to. The station needs the dough. We are planning to get to the below stuff and more on this program. We hope that folks will contribute while we're on the air. Do check back for the updates

The next regular WBAI LSB meeting is scheduled to be held on Wednesday, June 13th, 2012, at Alwan-for-the-arts, 16 Beaver Street, 4th floor, in downtown Manhattan.

The WBAI LSB met on Wednesday, May 9th, 2012, at the Local 1199 MLK Center, 310 West 43rd St. between 8th & 9th Aves. in Manhattan. I actually got to make a Treasurer's Report for the first time since July. Of course some faction operative disrupted it.

There was an LSB meeting held on Thursday, March 29th, 2012, at the “Brooklyn Commons” 388 Atlantic Avenue, between Hoyt & Bond Streets in Brooklyn. This was our second LSB meeting this March. We again mostly heard from Management about how swimmingly things are going. We also elected members to the various PNB committees. Some “Occupy Wall Street” folks were at the meeting and left some rather revealing posters for us to see as we left the meeting at about quarter to one in the morning. The public session had ended at 9:46 PM. After the public session we'd had an executive session.

If you want to pledge to the program via the Web it's best to do so while we're on the air, you need to go here and be sure to pick Back of the Book as the favorite show. Otherwise your pledge won't be counted towards the program.

UPDATE: Well, we did very badly in terms of fund raising on this program. We raised $170, which is the lowest we've raised in many years. We don't know why we ended up raising so little. We have to hope that we can do better next time, if we have a next time. 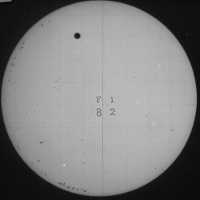 Photograph of the Transit of Venus December 6, 1882

On this program we talked about the transit of Venus that's going to happen on June 5th.

Well, right now it's not looking so great in terms of weather for late Tuesday afternoon. We'll be seeing if we can watch the beginning of the event live, but this transit of Venus will be starting quite late in the day for the east coast. If the horizon is cloudy it's just not going to be visible.

So here are some Web sites where you should at least be able to see a camera's view of this rare event.

Pickles of the North and I were able to watch the 2004, transit of Venus from our east facing bedroom window. Damned convenient, that. This year no one in greater New York will be able to see this event from an east facing window. It will occur before and during sunset, and in fact from our area we will not be able to see the entire thing.

Try to get a glimpse of it, even if it has to be via a stream Web video, because the next one isn't going to happen until 2117. 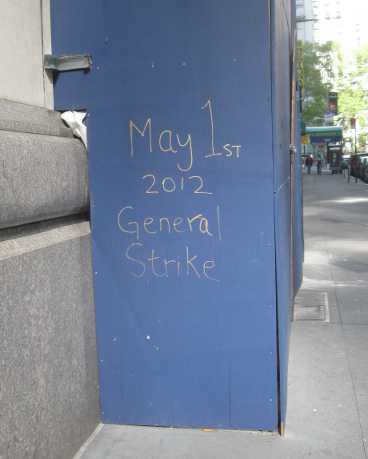 Well, here's something else that some young folks appear to think that they've invented. And of course lots of sorry, old leftoids were hoping for a lot more than the usual this May Day.

It was not the spectacular event some had been hyping. There was no general strike. Some people, young and old, are just not in touch with reality. 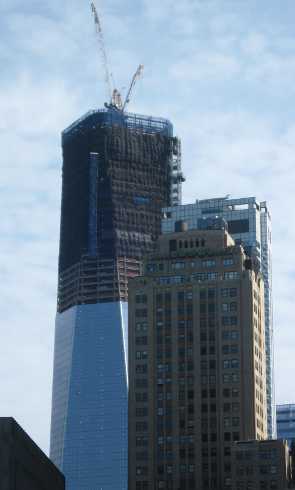 The pile to the left surpassed the Empire State Building as the tallest building in Greater New York City this past fortnight. Yeah, we may have more to say about that, if we can get to it tonight. 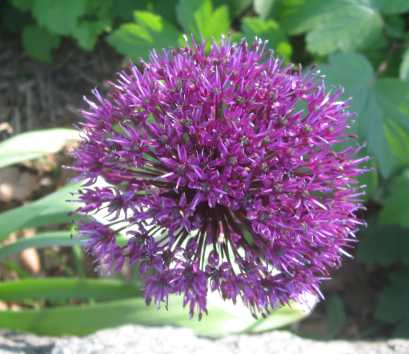 Especially in the spring I like to post some photographs of the flowers that we see and photograph in our peregrinations. Here we have some sort of cluster of small, purple flowers that were planted by the Parks Dept. at Battery Park this Spring. I don't know the name of this flower, I'm not a botanist, I just take snapshots of things I find interesting.

And long after these flowers have faded away this photograph will be carousing around the Internet.