It's Monday morning, February 18, 2013, 08:34, and I've updated this page with the information about the LSB meeting being definite and I've given its location. I've also added some text, a graphic and a link about the move of WBAI's broadcasting facility from the ass end of Wall St. to CCNY. I've updated the information about our pitching shift. More to come. The original top of this page follows the arrow. ⇒ So contrary to what we'd been told earlier on we will be broadcasting this program from the old haunt at 120 Wall St. I think that this one really will be the last program we do from that venue. We plan to get to the below topics and more on this program. This is, however, a pitching program, and what we get to is going to largely depend on whether or not we raise any money. We had to get our program evaluations in yesterday, and Management may well be looking at how we do during this major 'thon as a part of the evaluation. So if people would pledge early on, and if a lot of listeners would do so, it would help us to get to the stuff we want to get to in the time allotted, and it may well help us to stay on the air. I'll update this Web page at some point.

We are pitching on this radio program! If you can please call 1-516-620-3602 during the radio program and pledge some amount of money to help keep Back of the Book on WBAI and help keep WBAI on the air.

UPDATE: it looks like we raised $185 on this pitching shift. Thanks to all who pledged. I think we're pitching again on the next program, so if anyone missed this opportunity to pledge you should get another one on the March 2, program. 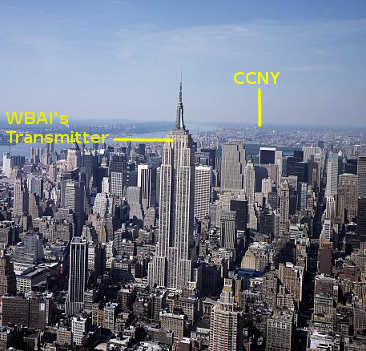 Getting From There to Here

We had been told, with little notice, that we'd be broadcasting from the new facility at CCNY for this program. But there were technical difficulties there and so we broadcast from 120 Wall St.

Staff were given a couple of hours' notice that the switch over to the temporary CCNY broadcast facility would in fact occur on Monday morning, February 18, 2013, and that has happened.

Here are the E-mails we got about all of this.

In the image on the left you can see where WBAI's transmitter room is on the upper floor sof the Empire State Building. The “CCNY” is my approximation of where CCNY is, way uptown. Getting the transmission details worked out over that distance is not a trivial exercise.

And so a new era, a temporary one, begins for WBAI. 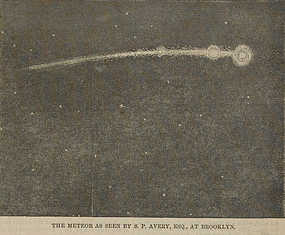 The meteor of July 20, 1860, as seen from Brooklyn
Graphic credit: John McNevin for Harper's Weekly

A bolide (a meteor that explodes) hit the Earth's atmosphere over central Russia at about 9:20 AM local time (12:20 AM EST) Friday. The bolide was about 50 feet wide and NASA's Jet Propulsion Laboratory in Pasadena, California, estimated its mass at about 7,000 metric tons. The bolide hit the atmosphere traveling at about 40,265 MPH.

The meteor soared through the upper reaches of the Earth's atmosphere for about 30 seconds before it exploded in the stratosphere at an altitude of between 12 and 15 miles. A spokesperson for the Meteoroid Environments Office at NASA's Marshall Space Flight Center in Huntsville, Alabama estimated that the air burst released about 300 to 500 kilotons of energy, similar to the yield of some tactical nuclear devices.

The airbust occurred over a populated area of the Urals and resulted in about 1,000 injuries to people on the ground, according to a statement from Russia's Interior Ministry. Two of those injured are described as being in grave condition.

Structural damage on the ground ranged from broken windows to one partially collapsed building.

By contrast, the bolide that exploded over Tunguska in the Russian Empire on June 30, 1908, released an estimated 10 to 15 megatons of TNT, which flattened hundreds of square miles of forest. But there were no reported injuries or deaths as the result of the Tunguska event because it was in a remote section of the Czarist empire.

When I was a kid it used to be pointed out that no one had ever been killed or even injured by a meteorite, despite their fierce velocity. And then in 1954, a woman was hit and bruised by a meteorite that crashed through her roof, bounced off the floor and struck her.

Recent research suggests that over a thousand years ago a more robust meteor broke up over northern Europe and devastated a Norse village. The terrain there in the late 20th Century showed a number of small lakes and ponds that are thought to be the modern remnants of the craters which formed as the meteor broke up and hit the populated area like a cosmic shotgun blast.

Joey Ratzinger has gotten tired of playing Pope, so he's resigning at the end of this month.

Well, this is an excellent opportunity for me! Yes, I am going to run for Pope. I could be the first open atheist Pope. We'll be kicking off my campaign on this program.

So vote for r. Paul Martin for Pope, that's the office of Pope on the Militant Bisexual Atheist ticket.