It's Wednesday, April 10, 2013, 05:07, and I've updated this Web page with the location of the next LSB meeting. More to come. The original top of this page follows the arrow. ⇒ We plan to get to the below stuff and more on this program. We'll hope that we can get to the temporary studios all right again. And if we're lucky we may even do a radio program that you can listen to. I'm glad to say that we have gotten to where WBAI will be broadcasting through April at least. We still have a lot of dough to raise though. I do plan on updating this Web page at some point, so check back in.

The next regular WBAI LSB meeting is scheduled to happen on Wednesday, April 10, 2013, at 7:00 PM at Alwan-for-the-arts, 16 Beaver Street, 4th floor, in downtown Manhattan.

The WBAI LSB met on Wednesday, March 13, 2013, at Alwan-for-the-arts, 16 Beaver Street, 4th floor, in downtown Manhattan. Of course the current crisis was the main topic.

I got to give a Treasurer's Report for the first time in a long time. I think it was last Summer that I was last able to give a report. The LSB has had better things to do than find out more information about WBAI's finances. The General Manager's report was even pushed down the agenda the last time. Yeah, why let him report?

So I give a fast report and some idiots didn't like it. Now they want written reports before every LSB meeting. This pretty much insures that they won't get to Treasurer's Reports during the meeting and I doubt that most of them will read the reports I put out.

There were a lot of attacks on the General Manager both from faction operatives and from one Staff member who actually heckled and interrupted his report!

On the previous program I pitched for what is variously called “The Antenna” or “The Transmitter” which all comes down to the back rent we owe the Empire State Building.

I am glad to report that we have made it to the end of March and we're still here. The following is a report from the WBAI General Manager on the campaign to pay off the back rent at the Empire State building. Thanks to all of the listeners who have contributed to our emergency transmitter/antenna fund.

Thank you all for your hard work. As you can see, we are out of the red danger zone but we need to continue to find creative ways to make money steadily to make sure we do not default on our agreement. 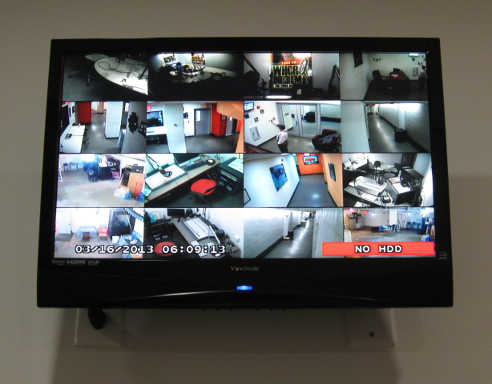 Yeah, We've Got surveillance at CCNY, All Right

So the March 16, program was our second one at the temporary CCNY studios. Actually, it was my second one, Pickles of the North was away at the North Pole for that radio program.

The photograph I took before the program, as I neared the entrance to the building on the CCNY campus from which we do our radio programs, did not come out well. That's because it was too dark for the camera to catch much.

You can see that we're being looked after in the temporary studios. It had been rumored that the studio that we're now using for Master Control had cameras watching it, so that people could watch us doing live programs. It turns out that this is not the case.

You can see me in one of the frames from this mosaic of surveillance videos, I'm taking this photograph in that frame. 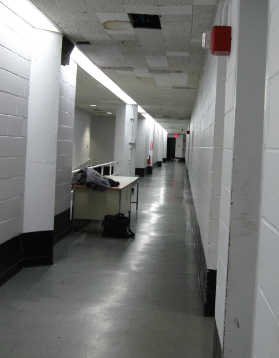 Here's a view down the hall outside of the radio station at CCNY. The Men's room is way down at the far end of this hallway. That's also where the entrance to the hallway is. The women's Room is much farther away! A certain amount of bladder capacity is certainly a prerequisite for doing late night radio here.

That's my coat and stuff on one of the tables in the middle distance. There are all sorts of hallways branching off from this one that lead off to rooms of all sorts. It looks like we're in a basement, but in fact this is still the first floor of the building we're in. You could probably film a science fiction movie about people surviving a nuclear war in a fallout shelter here, and it'd look authentic.

Cramped quarters and long walks to the can are better than not having studios at all though.

Mayor Bloomberg is going on about how great it's going to be in about five years when you can't walk a foot in New York City without the police watching you. I think he means Manhattan and not Greater New York though. There's no way they'll be able to get every place wired like that by then. But the Mayor seems to think it's great. I disagree. We plan to talk about this tonight. 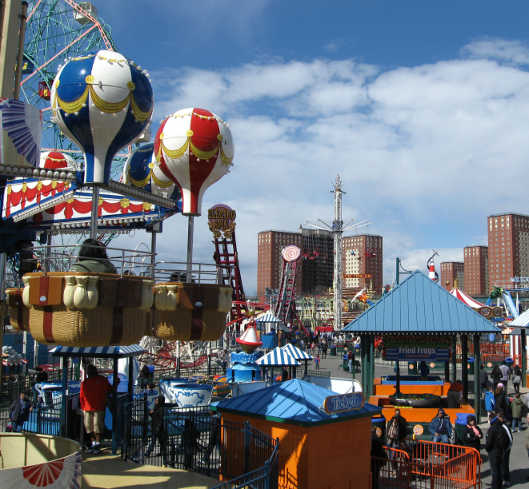 New Luna Park in the Early, Early Spring of 2013

Pickles of the North and I went to Coney Island this past week to see how things had progressed since our last visit there.

The Coney Island amusements officially opened the 2013, season on Palm Sunday, March 24th. Here you can see the new Luna Park all abuzz with people bringing their kids, who are off for Spring Break this week, to the amusement park for some shaking, spinning, lifting, dropping, rattling and a general going around in circles that can be so much fun when your of an age when neither gravity nor arthritis places so much of a toll on the sudden movements of your joints.

We also saw the latest evidence of the severe damage done to the area by superstorm Sandy last October. It's going to take quite a while to clean all of that up.