All right, it's Friday night, April 26, 2013, 23:25, and I've updated this Web page with more about the NASA plan to tow a small asteroid into an orbit near Earth, and added a nifty graphic, and I've updated the information about the location of the next LSB meeting. More to come. The original top of this page follows the arrow. ⇒ Well, here's this one. Running out the door now. Check back for updates.

The next regular WBAI LSB meeting is scheduled to happen on Wednesday, May 8, 2013, at 7:00 PM at Alwan-for-the-arts, 16 Beaver Street, 4th floor, in downtown Manhattan.

I got to give a Treasurer's Report for the second meeting in a row. I had posted a written Treasurer's Report the night before because the LSB had passed a motion at the previous meeting saying that I had to post one before every meeting. And I got interrupted while I delivered it. After I delivered it one faction operative was asking for numbers. Jeez, I'd just read the numbers, and she then said that she wished it were in writing. She obviously hadn't read the report as posted, and she hadn't been listening well enough to hear me read the report aloud a minute earlier. So I read the numbers again.

The big thing that happened was that the faction cheated in this meeting. They had made a motion and time was running out and one faction operative, who's been banned from the radio station for, among other things, multiple instances of assault and battery on people, moved to extend the agenda item till the last five people got to speak. Well, the non-faction members like to bend over backwards to accommodate others, so that got passed. When the time came for all of that to be done that faction operative claimed that she'd meant that the meeting would continue indefinitely. What a liar she is! Yeah, she lies a lot. The Chair rightly ruled that the meeting was over unless the LSB passed a motion to extend again. Well, to extend the time for the meeting requires a two thirds vote, and the faction didn't have enough people there to pass that, even though some non-faction members had left, thinking that the meeting was about to end in another couple of minutes. But the faction operative appealed the ruling of the Chair and overturning the ruling only takes a majority. And they did have a majority, with people having left. The faction then spent about another hour and a half passing everything they could think of. They call their little political party the “Justice & Unity Campaign,” but it's the most divisive and unjust bunch I've seen. 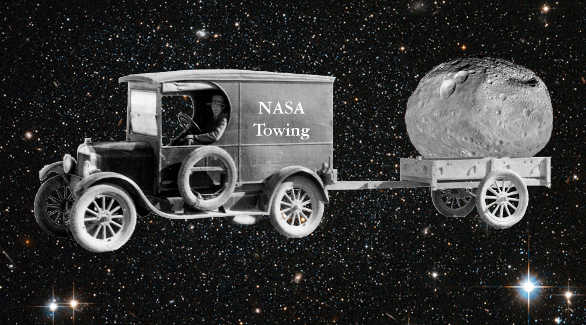 NASA Wants to Tow an Asteroid

We talked about NASA's plans to tow an asteroid into an orbit around the Moon in the next few years. That's going to require quite the long haul tow truck.

The Obama administration has appropriated $100 million in “planning money” to figure out how to find a suitable asteroid, maybe 20 to 30 feet wide, and figure out just how to get it back near Earth.

Once the target asteroid is identified, and the means of getting it are determined, the real mission will begin.

The asteroid that will be captured will be smaller than what might have been explored in the original plan, but the mission will happen sooner and will not preclude a longer visit to a larger asteroid in the future. It'll probably also be safer to go to a closer asteriod.

Senator Bill Nelson (D-Fla.), who is himself an ex-astronaut, says that this mission will be a sort of training mission that will contribute to an eventual mission to the planet Mars by U.S. astronauts.

Part of what's motivating this is the big bolide that blew up over Russia last month. Suddenly people are taking rocks from space more seriously. That's probably a good idea. 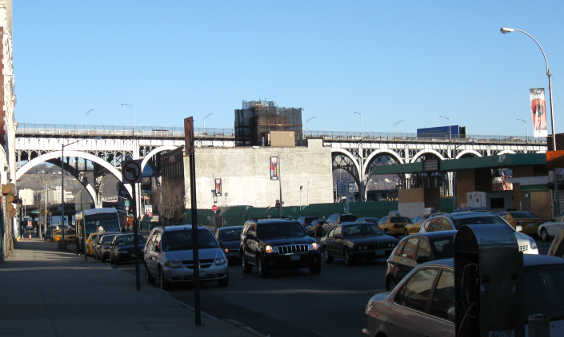 So we're in this new studio at CCNY, and we are continuing our tradition of wandering about in the local neighborhood after the radio program. We did that for years when we were at 120 Wall St., and posted quite a number of photographs of things going on in lower Manhattan and Battery Park.

Now that we're way uptown, we figured that we should see what's in the area that's interesting to visit quite early on a Saturday morning. 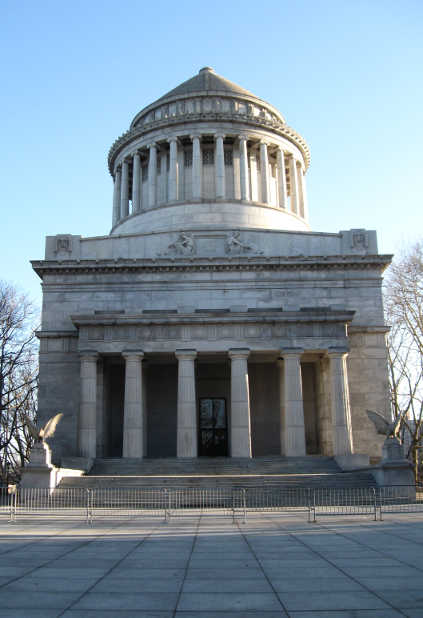 Nobody Was shaking Their Ass Here That Morning

And we made our way to Grant's Tomb. Oh, but it was cold that morning, and there was quite a wind blowing. We hardly stayed there any longer than it took to take this photograph. On some future morning when the weather is less taxing, assuming we're doing a radio program on that future morning, we'll investigate that area more.

We did not notice anyone dancing on the tomb that morning.

Yea, I'm still going on about that singer Beyoncé doing a show where she danced around on Grant's Tomb. I do not understand why anyone would want to dance on a tomb. Did neither she nor anyone connected with her organization understand that two people are buried there, thus the word “Tomb” in the name of the place? 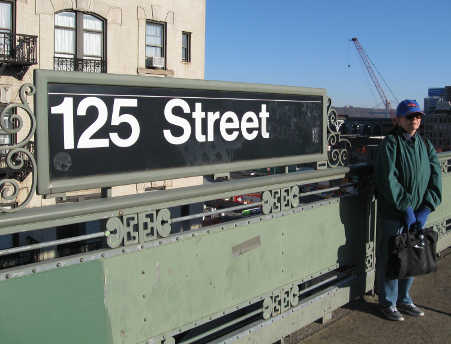 Pickles of the North

And here's a shot of Pickles of the North waiting for the train at the elevated #1 IRT line station at 125th St.

Yeah, and the trains are crowded at that time on a Saturday morning. We're used to the crowds emptying out at the South Ferry IRT station, where we used to end up at about the same time on Saturday morning's after we'd wandered around lower Manhattan for a while.

Pickles is holding my bag in this photograph, so I can use both cold, ungloved hands on the camera. She is also a bit concerned about how close to the edge of the platform I'm getting.