The Middle Third is here! I am very glad about that. And we plan to get to the below topics and more on tonight's radio program. But we do have to pitch. This time it's our annual Spring Marathon. The station is in really dire shape right now, but there is some hope in the future. However, we need to get to that future. So we hope that many of you will be generous and pledge tonight. And I really will try to update this Web page.

The next regular WBAI LSB meeting is scheduled to happen on Wednesday, June 12, 2013, at 7:00 PM at a location to be announced.

I got to give a Treasurer's Report for the third meeting in a row. I had once again posted a written Treasurer's Report the night before because the LSB had passed a motion that I had to post one before every meeting. This one is very dire.

WBAI Management gave a report, or tried to. Faction operatives insulted Management, other LSB members and anyone not aligned with their so-called Justice & Unity Campaign political party. Eventually the WBAI General Manager and a number of his Staff just walked out of the meeting.

The entire meeting was boisterous and disrupted by the faction operatives. At the last meeting the faction had cheated and had spent more than an hour making believe that they were having a legal meeting. That nonsense got struck down at this meeting. As usual the faction didn't like it and got nasty. They can dish it out, but they can't take it.

It's mid-Spring so of course it's time for the WBAI Spring 'thon! We are pitching on this radio program! If you can please call 1-516-620-3602 during the radio program and pledge some amount of money to help keep Back of the Book on WBAI and help keep WBAI on the air.

We plan to talk about a new study which shows that the concentration of carbon dioxide (CO2) in the Earth's atmosphere is now at its highest point in 3 million years. And this increase in the carbon dioxide levels shows no sign of going down nor does it seem to be levelling off. If humans ever get serious about reducing greenhouse emissions it will take a long time for the atmospheric CO2 levels to even start going down. 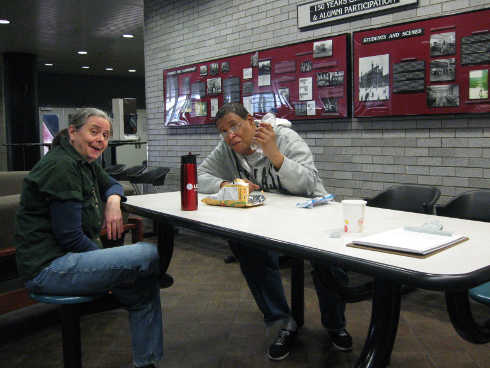 Another Wild Back of the Book after Show Party!

Here we were, Pickles of the North, Uncle Sidney Smith and I, after the last program. I'm taking the photograph.

Yeah, we can hang out in the CCNY North Academic Center Rotunda after a program. So we're getting all diet soda'd and potato chipped up here, with some of the revelers opting for juice. Oh, we are a wild bunch all right. 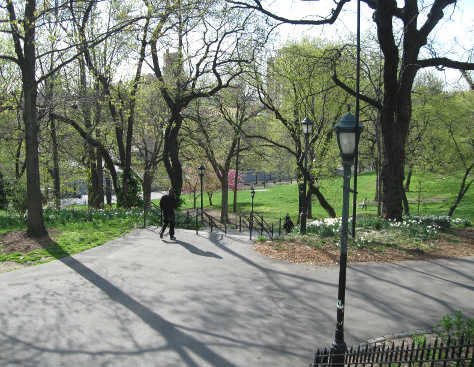 After the big party Uncle Sidney stayed at CCNY and Pickles of the North and I went exploring.

Here's a photograph of St. Nicholas Park. This is from the steps that you enter by from 135th St. Some folks have suggested that it's easier for producers to take the A or C train to the 135th St. stop there and walk to WBAI's current CCNY studios through the park, and thus avoid that long slog up the hill from Broadway up 135th St. But the prospect of going through an urban park at 4:30 AM isn't that appealing to me. Besides, you end up having to climb a lot of stairs anyway!

It's a nice looking park early on a sunny Saturday morning though. We walked around in it a little bit. I'm sure we'll explore it more in the coming months as WBAI shares space at CCNY.

I have some shots of Spring flowers that I'll be posting up here some time soon.