We'll be pitching again on this program. Originally we hadn't been supposed to be pitching, but Management has informed us that we need to raise a certain, definite amount over this weekend. Given the recent pledger drives and the information given out during them I'm sure we can all figure out exactly what we need the extra spurt of dough for by Monday. So we'll pitch, and we'll mourn our friend and fellow producer Ibrahim Gonzalez and we'll try to do some interesting radio for you this morning, assuming that the rain and floods don't wash us away before we can get there. Check back in for the updates I plan to put in here. I really am planning to do those updates.

The next regular WBAI LSB meeting is scheduled to happen on Wednesday, June 12, 2013, at 7:00 PM at Alwan-for-the-arts, 16 Beaver Street, 4th floor, in downtown Manhattan.

I got to give a Treasurer's Report for the second meeting in a row. I had once again posted a written Treasurer's Report the night before because the LSB had passed a motion that I had to post one before every meeting. This one is very dire.

WBAI Management gave a report, or tried to. Faction operatives insulted Management, other LSB members and anyone not aligned with their so-called Justice & Unity Campaign political party. Eventually the WBAI General Manager and a number of his Staff just walked out of the meeting.

The entire meeting was boisterous and disrupted by the faction operatives. At the last meeting the faction had cheated and had spent more than an hour making believe that they were having a legal meeting. That nonsense got struck down at this meeting. As usual the faction didn't like it and got nasty. they can dish it out, but they can't take it.

We've had some deaths in the WBAI family this past fortnight. Ibrahim Gonzalez had been a producer at WBAI for 23 years. Listeners would have known Ibrahim from the two radio programs he regularly did at the station: Radio Libre on Sunday afternoons, and In the Moment in the wee hours of Friday mornings. In addition he had done a number of other programs throughout the WBAI schedule, including Wake Up Call on Fridays.

I knew Ibrahim as a fellow producer. He went through all of the trails that all of we unpaid producers go through at WBAI, and he was one of those who was able to stick it out and keep on doing radio.

Ibrahim did more than radio programs at WBAI, he was one of us who was what you could call a WBAI activist. He spoke out about conditions at the station, he tried to make things better here, and he was recently a part of an off-air fund raiser that raised about $4,800 for the station. He was in the midst of planning another off-air fund raising event for WBAI when he passed away.

Away from WBAI Ibrahim was an accomplished musician and composer, he was also a community activist and he did a cable access TV program on Bronxnet.

The WBAI Web site has a page devoted to Ibrahim Gonzalez and the New York Daily News has an obituary for him.

It's late Spring this radio program is doing its second pitch as a part of the WBAI Spring 'thon! If you can please call 1-516-620-3602 during the radio program and pledge some amount of money to help keep Back of the Book on WBAI and help keep WBAI on the air.

Of course we plan to talk about the discoveries over the past few days of the latest incursions of the National Security State on the privacy rights of americans and everyone else in the world.

The summer solstice will arrive on Friday June 21, 2013, at 1:04 AM (ET), which is only the day before our next program. Oh, I enjoy this time of year. For more on the seasons, sub-seasons and their dates go here. 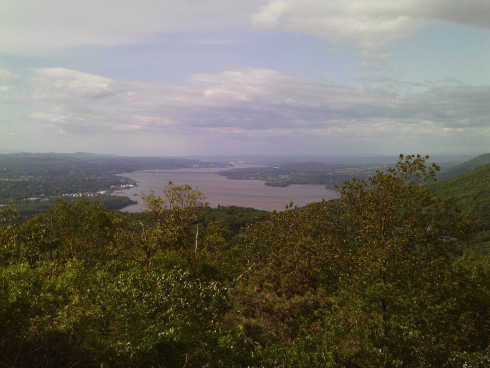 The Hudson River From Atop Mount Misery

Pickles here. The Sunday of Memorial Day weekend I went on an expedition with my pals Melissa, Martin and Iris to Cornwall New York. We entered the Black Rock forest (ah, that coincidental name would have meant so much more to me if everyone from Lost hadn't ended up in Purgatory) and we spent several hours hiking through the woods, still full of mud ponds from the heavy rains the day before.

We hopped, skidded and tiptoed from one rock and fallen tree to the next - and it was fun! But kind of scary too, especially when we began to climb - Mount Misery! Which I think is the baby sister of Mount Doom. And to get up to the peak of Mt. Misery we ended up scaling an almost dry waterfall bed. Did I mention I wore sneakers - probably not the best thing for waterfall climbing.

But we made it and had a nice sit down and snack at the top. Where the wind was blowing REALLY HARD, so I mostly sat on a boulder away from the edge of Misery. But what a view! It was a great afternoon out in nature with good friends.