We are actually not pitching on this program, although we may suggest that someone become a BAI Buddy. We plan to get to a number of topics on this program, but the global warming issue and the rise in the sea level is something that we will probably spend a lot of time on. But we never know exactly what will happen on a free form live radio program. So check back for updates to this Web page.

The next regular WBAI LSB meeting is scheduled to happen on Wednesday, July 10, 2013, at 7:00 PM at a location to be announced.

The LSB had a report from the General Manager on the state of some things, and then LSB went into executive session for a while. The official report out of that executive session is that, “The WBAI LSB met in executive session to discuss personnel, financial and operational issues in relation to the PNB mandate.”

In some news I am glad to hear the anti-gay group Exodus International has announced that it's shutting down. This is a group that started in mid '70s and claimed to be “converting” gay men into straight men. As if. We'll read some of their press release on this program. 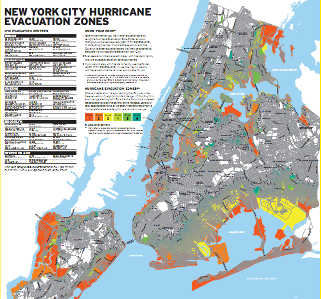 We plan to talk about the predicted impact of global warming on New York city and the rst of coastal America on this program.

The city has just issued a new brochure on the evacuation plans if a flood strikes the city again. The old evacuation plan was shown to be woefully inadequate when superstorm Sandy hit us last October. Among other things no one thought to evacuate Gerritsen Beach in Brooklyn. That area is very low lying and even moderate flooding would inundate it. But apparently no one at the city's Office of Emergency Management had ever thought to list it as needing to be evacuated in case of a flood.

There have been some suggestions about what to do about this impending crisis, but they're all very expensive solutions.

The problem affects more than New York City though and we'll be talking about that on this program. 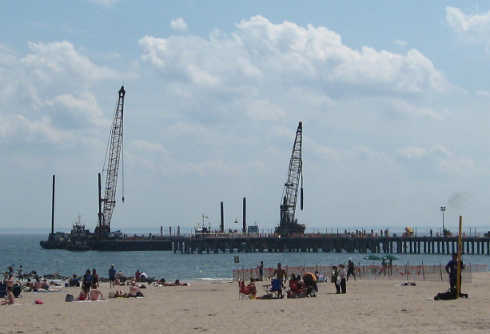 Speaking of places that were ravaged by superstorm Sandy, Pickles and I went to Coney Island again this past fortnight. In the photograph on the right you can see cranes and other heavy maritime equipment working on repairing the old Steeplechase Pier at Coney Island.

I don't know if we'll have time to talk about our latest expedition to the Brooklyn Riviera but it will certainly be in our thoughts as we talk about the future of the east coast of America on this program.